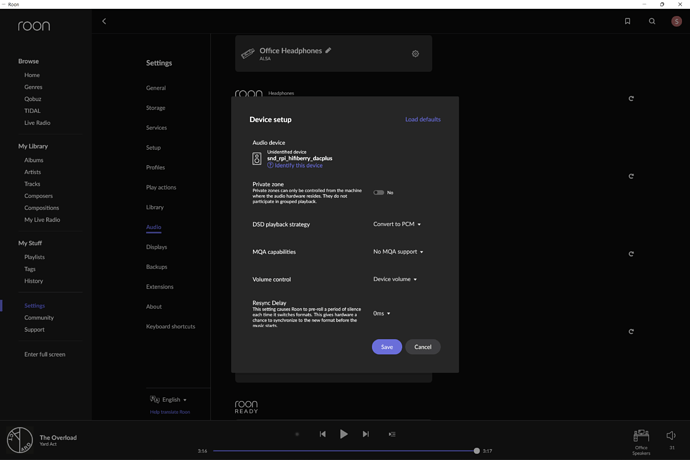 You need to scroll down to see them.

Note: There is a bug currently that Roon is missing scrollbars on some screens. Use your mouse wheel or click-hold-drag or touch and drag to scroll. 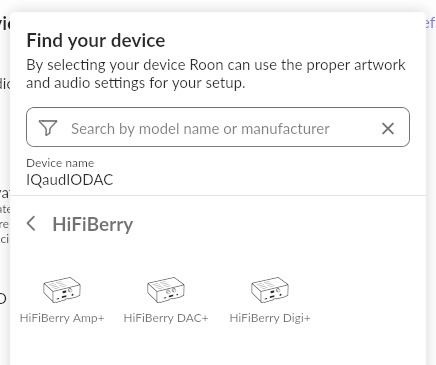 Both your observations are wrong, I have scrolled there is no scroll bar and yes I have identified it correctly. Changing it Roon makes zero difference. Its a HifiBerry Amp2 which shows as DAC+ which it sets max rates at 384 it doesnt support that it only goes as high at 192.

Nothing works, did it on my phone instead. So far I have GFX issues on both windows and Android remotes. Way to go Roon!

As you responded to me: You can’t scroll, not even on your Android?

Note: I can’t help or comment on your other issue with the device identification.

…I have scrolled there is no scroll bar and yes I have identified it correctly.

There is no scrollbar on the pop-up, and you displayed the generic icon rather than the one associated with the HiFiBerry DAC+ (snd_rpi_hifiberry_dacplus.) As I said, just observations, to help. So, neither Windows nor Android scroll?

No they both have different graphical issues Andorid is fine for settings. Posted a separate thread for its issue 2nd time to as ford time it got ignored. And no windows won’t scroll at all no scroll bar shows up at all. Track pad won’t do anything in that region at all.

Thanks for reporting this bug — our team has confirmed it is a bug they’re aware of. While the Show Advanced option is not displayed, it has not disappeared. You can still access it by hovering over the Device Setup tab and scrolling down. It should show up.

Sorry about the trouble

Thanks for acknowledging its a bug.