I have Mahler Symphony 8 under Tennstedt, in 2 CDs, EMI CDS 7 47625 8. The following shot shows the album cover for what I have and title and text for something else: 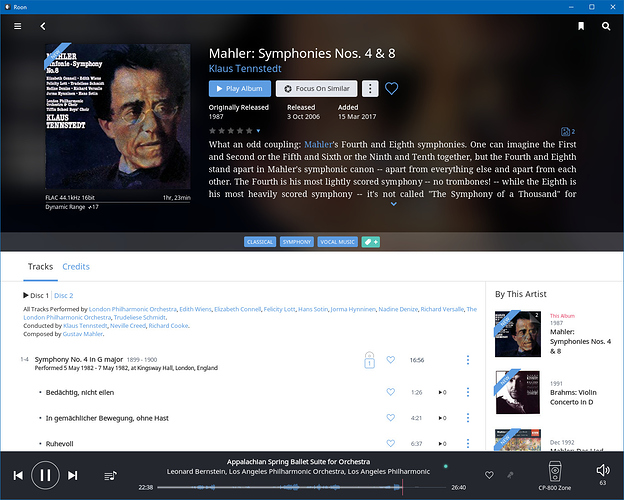 Any way to edit (I’m using Roon 1.3 on Win10 Pro x64) the track information, given that I’ve found at AllMusic the correct album and its information?

Have you tried re-identification?

I just tried that. It made no difference.

I just tried saving the concerned subdirectory elsewhere, deleting the album from Roon, and copying the subdirectory back. Roon re-detected the album, with the same, erroneous text.

Have you tried re-identifying the album manually?

“Manually”? As I said above, I re-identified, by clicking on a button. Is there a different way?

I was referring to the different options within the identification wizard (after you click the button). You can select from different sets of metadata and do completely manual searches for metadata that the automatic search didn’t find.

I don’t think you are doing what @joel is suggesting. The Metadata preference screen is for a different purpose than identifying albums.

And you write: “And I notice that when I go back to Metadata Preference, nothing is checked!”. This is by design, because it works in a different way than most of us assume. See:

Can we please have a permanent visual indicator (“checkmark”) of what Roon is using? At the moment there’s no way I can tell

[image] Not even after changing something, as for the track I’m taking this from: [image]

What is it precisely that Joel suggesting?

Thanks for the pointer to the metadata explanation.

I clicked around with editing of the problem album. Now I have this, which is partial information (eg, little track information): 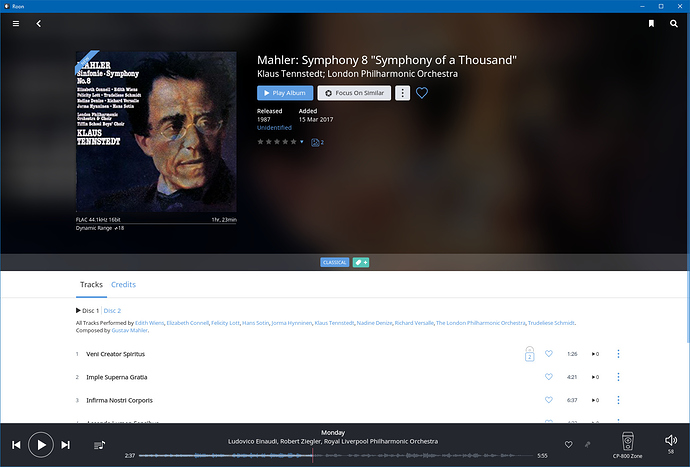 Try as I may, I cannot get a Roon database hit. But I’ve found the album at AllMusic, at this URL: http://www.allmusic.com/album/mahler-symphony-no-8-mw0001863183 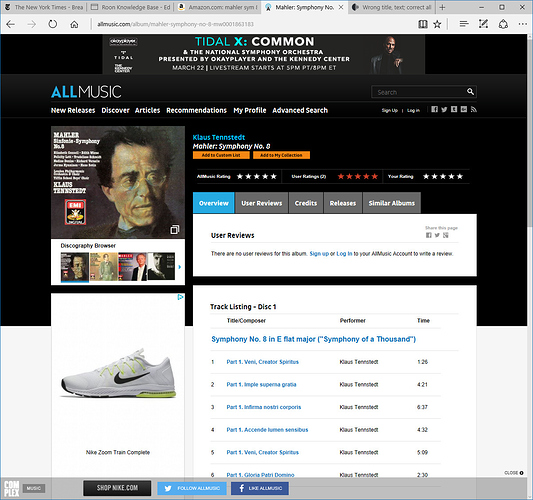 Have you reached the “Manually search for your album” screen? Entering the Artist and Album as per your AllMusic link seems to bring up your album as the first hit. 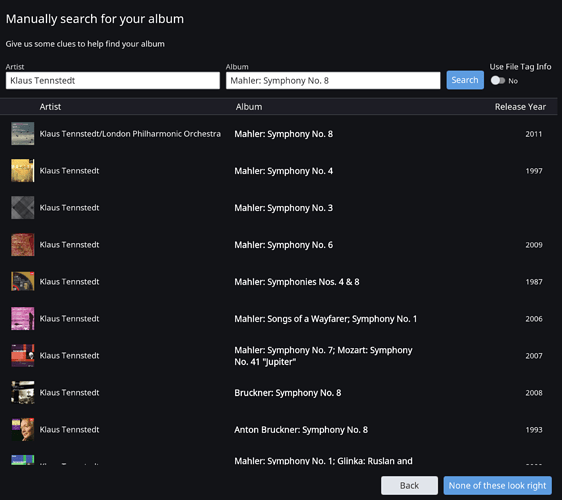 I already looked at that first album. Its track timings (see http://www.allmusic.com/album/mahler-symphony-no-8-mw0002112831) on disc 1 differ from my disc 1, and there are 8 tracks versus 6 tracks on my disc 1.

Here’s my disc 1 (the shot I gave above was of only the first 3 tracks): 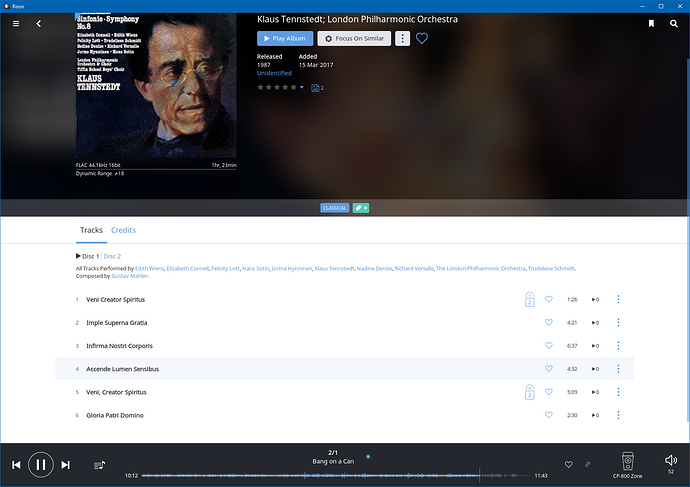 @James_Antognini The album you are trying to identify in Roon is a 1986 recording. The album suggested by joel is a different recording, a live one made in 1991. It evidently cannot be used to match your album.
Looking back at your first post, I am almost sure your identification is based on the following reissue of the 1986 recording : 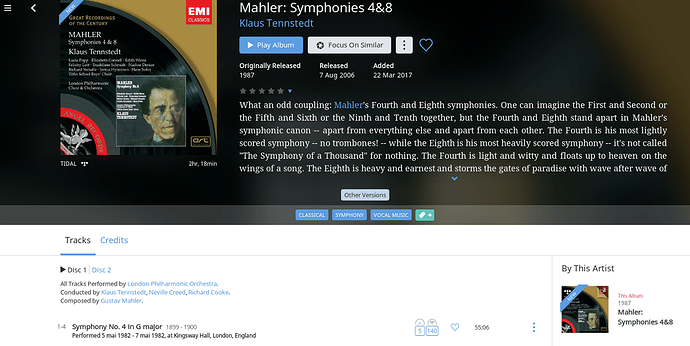 Capture.PNG1105×555 422 KB
This reissue combines Mahler’s 4th and 8th, but unfortunately for you the 8th starts on this reissue at track 5 of disc 1. On the album you want to identify, the 8th starts at track 1 of disc 1. Did you inadvertendly force Roon to blindly match those two albums an ignore the mismatch warnings ? I suspect that the artwork shown in your post comes from your “Preference” settings and you have local artwork somewhere in your album folder or inside your file tags.

I know of another reissue of the Tennstedt 1986 recording , on discs 11-12 of the following boxset :

Capture2.PNG1080×516 459 KB
But again here, the reissue starts at track 11 of disc 11, so it makes it impossible to blindly match your album to this reissue.

I did some research and I am afraid the Roon database does not hold a reissue of your album where the tracks are laid similarly to your original album. Unidentifying the album and tagging the tracks could be your best choice.

Thanks for delving into this question.

I don’t recall telling Roon to ignore mismatch warnings. But it’s possible. The album cover I showed is from a scan I made of the cover in the CD case. The cover matches that at the AllMusic URL I gave (http://www.allmusic.com/album/mahler-symphony-no-8-mw0001863183). And, as I said, the track information at that site matches my track information. I think you are saying that Roon’s database doesn’t include that specific album. The AllMusic site gives 1987 as the release year, and the CDs I have both say 1987.

I may follow your suggestion to unidentify the album and do the work of tagging the tracks.

I’ve done some deeper digging here as it was bugging me and it appears that we incorrectly merged several albums. I’ve made an edit to separate them which should be live in about 24-48 hours. Sorry for all the confusion!