Hi, @joel, I have several of the Bach Cello Suites. The Menuet, Bourrée and Gavotte dances are in pairs across the different suites as the OP has noted. Depending on the release, however, roon is sometimes displaying these double dances correctly as a pair and sometimes it is just displaying the first one.

There is a lot of variation in the naming conventions. For example, sometimes just the plural “Menuets” is used, but it can be “Menuet I, Menuet 2”, “Menuet I & II” and many others. Most of these variations roon displays correctly as a pair. However, in my files roon is consistently displaying only a singular Menuet, Bourrée, Gavotte etc. where the separator is a slash “/”.

This screenshot is for Suite No. 1 but it’s the same for the others. 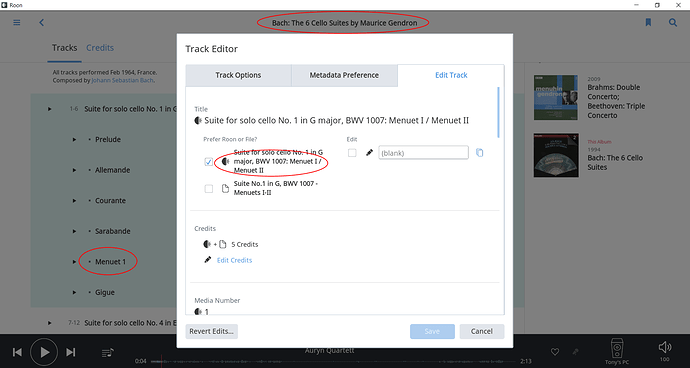 Hope you can take a closer look at this. Maybe these slashes are affecting other things as well.

@James_Antognini @tripleCrotchet This is composition part assignment inconsistency by Rovi. James has raised one topic where Rovi has assigned two parts to the same track (which is unexpected and has confused us). Here, they’ve only assigned Menuet I, Bourrée I, Gavotte I, etc. to the track, when the track spans I & II.

We could fall back to the track titles, but if and when to do so is unclear at the moment. We’ve opened a conversation with Rovi about this and are waiting for a steer. 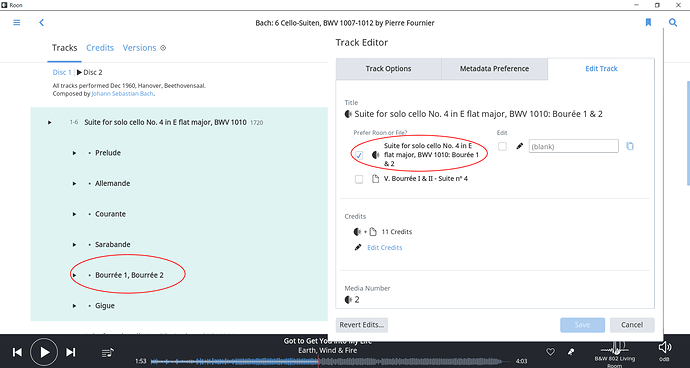 But this Maurice Gendron one does not (separated by a slash) 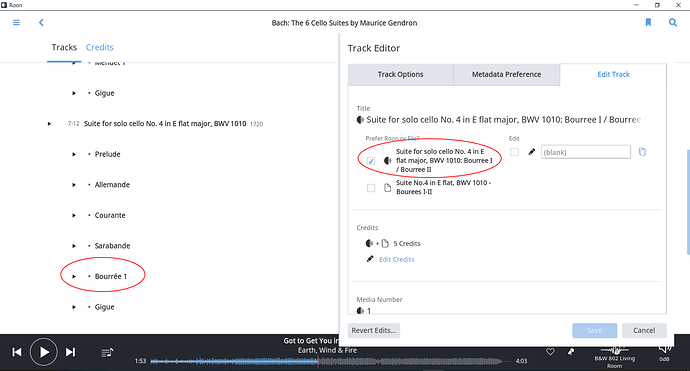 It seems to depend on the separator.

There is a one-to-many relationship between a composition part and the tracks (on different album releases) to which the part has been assigned, so the part name and track title won’t always match up (unless we decide that we want to change how we handle this).

Now… I have just learned something (yes, there are parts of the code I’ve not been to before

). It turns out that we do honour multiple parts assigned to a track.

For every example in this thread, where Roon displays Part 1, Part 2, that’s where two composition parts have been assigned to the track by Rovi. Where you only get a single part name (and are expecting two), it looks like that’s where Rovi has failed to assign both parts spanned by the track.

For Bach BWV1010, you can see the canonical Rovi list of composition parts here on allmusic.

As I said, we opened the conversation with Rovi to determine the best way of handling all this stuff. It could be quite simply that we will need to ask them to make some corrections.

Thanks for the explanation Joel,

I actually have 6 examples, all with same problem:

Find album reviews, stream songs, credits and award information for Bach: Cello Suites - Heinrich Schiff on AllMusic - 2000 - In the '80s there were those listeners who…