Continuing the discussion from What DAC do you use with Roon?:

I was very interested to see you have both the Yggy and an ESS based DSD DAC.

I have been asked to recommend a DAC for friends who are not mad keen computer audiophiles, but enjoy music and would be best served with something they can “set and forget”. Their budget would extend to the Yggy and it was uppermost in my mind for them, but I have been wondering whether the (current) lack of support for DSD should be a factor (although I don’t think they would be interested in either DSD original material or upsampling with HQP).

How do you like the Yggy compared to DSD material ? Would it be a painless fit for someone who isn’t interested in technical aspects ?

I prefer the Yggy with native filter over my ESS at DSD 128 (using HQ Player). The upsampled ESS in my system has a larger soundstage but the Yggy imaging is more solid and to my ears has the more realistic tone. I think a lot has to do with genre. I play lots of Classical/Jazz and IMO accoustical music is where Yggy really shines. If I was in to electronic music I would probably prefer the ESS. Listener’s temperment is also important. The Yggy really is “set it and forget it”. A lot of audiophiles are knob turners and an ESS/HQ Player combo is great for fooling around with all HQ Players filters.

My advice to most audiophiles is get the Yggy first and if you want to fool around with DSD pick up something used like an ifi Micro for under $500. This way you have all bases covered. Another reason for picking up the Schiit is it’s modular upgradability. I love the ability to swap out a board rather than having to buy a new DAC every time technology changes.

I don’t have a Yaggy, but have a Metrum Acoustics Musette, which is a Non OverSampling DAC, PCM only,no DSD. I prefer the NOS DAC playing hi res files than previous ESS DSD dac. For me, DSD is no longer thought about.

I too have a Yggy and an ESS based DAC. The Yggy came later after a few years with the ESS as I wanted to try a R2R DAC. Yggy has become my main DAC and whilst I have some DSD content I simply let Roon send it to the Yggy as PCM…feeding active 3-way ATC’s I don’t perceive any significant differences (A/B through balanced inputs on my ATC preamp) between native DSD and PCM playback other than the same I perceive playing back other content…the Yggy remains the preferred playback route.

For comparing Yggdrasil and some DSD DAC, at least getting close to same price level would make sense. Comparing something like Yggdrasil and iFi iDSD Micro is kind of uneven (Bifrost MB vs iDSD Micro would be more fair)…

Since Metrum Musette accepts 352.8/384k input rates, it is also suitable for upsampling with HQPlayer. That also cuts the jitter by orders of magnitude.

had a Mytek DSD DAC (ESS), cost more than the Musette, prefer the Musette.
Up-sampling data adds artefacts/filtering, which defeats the purpose of a NOS DAC. I prefer it raw. YMMV

For comparing Yggdrasil and some DSD DAC, at least getting close to same price level would make sense.

Agreed, I’d put my custom build ESS ahead of the PS Audio PerfectWave MKII and the ML30.6 … two DACs that the designer and I enjoyed at the time and listened to extensively during design of the custom DAC. We built and sold 30 in the local audio community, and some years later they’re rarely traded. If they do trade they typically achieve ~80% of original sales price. I’d still pick it ahead of many of today’s DACs, the magic is in the IV stage.

For clarity’s sake, my ESS DAC is Eastern Electric Supreme with Sparkos Opamps and NOS tube. In total about $1700 vs the Yggy’s $2300. While I prefer the Yggy, I still get a lot of enjoyment out of my EE. In fact, several years ago I ordered a Metrum Octave (it was getting raves on Audiogon) but liked the EE with upgraded opamps (had Dexa at the time) a bit better in my system (tubed amp and preamp) The Yggy has now replaced the EE as primary.

However, because audio is a hobby I will probably look into eventually replacing the EE with a newer DSD DAC that can do at least DSD 256. (the Mytek Brooklyn and upcoming ifi Pro look interesting in the $2K range). I don’t necessarily expect the DSD DAC to supercede the Yggy. However, I do like fooling around with HQ Player filters and like sonic variety.

I recommended the ifi Micro as a good budget DSD DAC for someone who has already stretched a bit for something like the Yggy. Of course, if you can afford a better DSD DAC in addition - go for it.

Up-sampling data adds artefacts/filtering, which defeats the purpose of a NOS DAC. I prefer it raw. YMMV

If you have ever measured what the Musette spits out as NOS with RedBook input, it is pretty horrible. Especially jitter performance… Doing suitable upsampling drops the jitter by tens of dB’s.

Measurements don’t mean much, it’s how it sounds. On the Metrum site, they explain why NOS DACs measure badly, but sound better than oversampling DACS I’ve owned. I mean, just look at vinyl vs digital, vinyl measurements are bad, but, vinyl is pleasing to the ear. I like the Musette raw, more natural, it’s why i bought it. Personally, never liked the sound of upsampling, even on an oversampling DAC.

Measurements don’t mean much, it’s how it sounds.

But then you shouldn’t be talking about artefacts, or maybe just about artefacts that you get by running a NOS DAC without upsampling, if you like those… In addition for RedBook rates you get quite significant treble roll-off from 10 to 20 kHz.

Personally, never liked the sound of upsampling, even on an oversampling DAC.

But then you shouldn’t be talking about artefacts, or maybe just about artefacts that you get by running a NOS DAC without upsampling, if you like those… In addition for RedBook rates you get quite significant treble roll-off from 10 to 20 kHz.

Artefacts are created by up-sampling, it isn’t lossless. There is not a significant rolloff, it’s subtle due to the nature of NOS, which is part of the reason it gives its analogue type sound.

Artefacts are created by up-sampling, it isn’t lossless.

It certainly is lossless. If you prefer you can use upsampling algorithm that preserves all the original samples (only adds new ones between) and is completely reversible back to the original data.

There is not a significant rolloff, it’s subtle due to the nature of NOS, which is part of the reason it gives its analogue type sound. 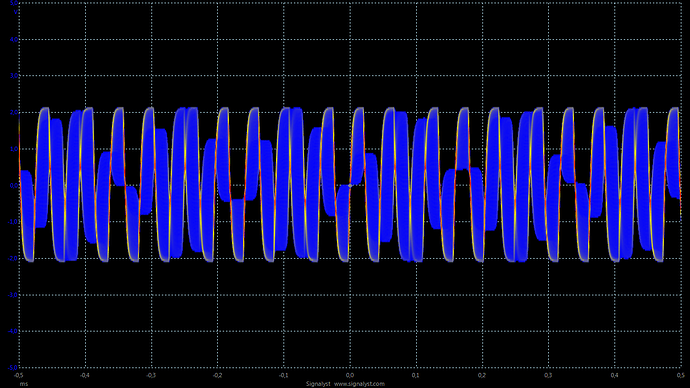 Here is the same file, but through upsampling to 24-bit 384 kHz: 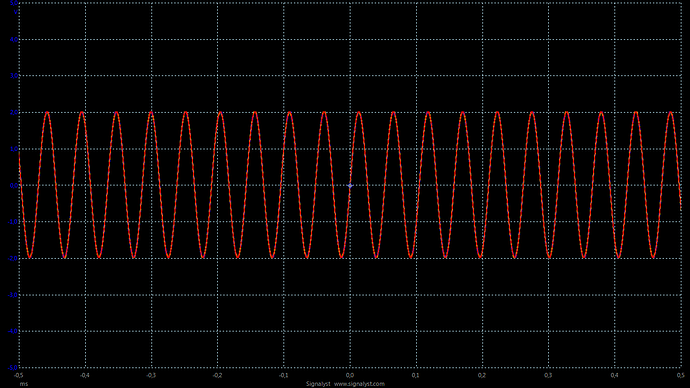 Why aren’t these things necessarily the same in your opinion Jussi ? Why can something measure well, but not sound well ?

Why can something measure well, but not sound well ?

Because measurement equipment which is typically used doesn’t capture the full ability (edit: or nuance) of the human hearing system.

I’ve mentioned I tried it and I don’t like up-sampling, is why I bought a NOS dac. The Musette performs perfectly as it should, and is a little presumptuous to say the DAC manufacturer’s DAC performs sub par… again, read Metrums design philosophy of why it doesn’t look good on paper, but sounds great… http://metrum-acoustics.com/Design%20Philosophy%20Metrum%20Acoustics.pdf

BTW, not sure where you are getting your facts from, but up-sampling is certainly not lossless, - for one, digital filtering time smear due to pre/post ringing.

Oversample or NOS - pick your compromise.

Agreed, but am interested in where Jussi, or others, think measurement falls down.

again, read Metrums design philosophy of why it doesn’t look good on paper, but sounds great…

I’ve read it but I don’t agree with it.

not sure where you are getting your facts from

but up-sampling is certainly not lossless, - for one, digital filtering time smear due to pre/post ringing.

Oversample or NOS - pick your compromise.

I don’t think world is black and white.

Agreed, but am interested in where Jussi, or others, think measurement falls down.

There are many aspects to be measured - and the related math. Also typical audio analyzers are not enough for designing something like a DAC. For that you need to also measure much wider bandwidth. That’s why I use set of equipment to evaluate different aspects of performance.

And what I always want to emphasize, is learning to listen for different errors - which is not necessarily something you want to do if you listen just for pleasure. Once you know how certain error sounds like it is much easier to spot. This is one of the parts related to my past work on passive sonar and training passive sonar operators. It is amazing how much people can learn on listening, when operators begin they can barely tell loud cargo ship apart from background sea noise. After few months of training they are already able to tell which cargo ship it is.

And I’m not usually black and white on things. For example many people rule tube gear outright bad, but it is not. Of course there is tube gear where tubes are just coloring the sound. Then there’s tube gear that is genuinely well designed[1]. One needs to know where tubes are good and where they are not. They are good if you need voltage gain but not much current. OTL tube power amp driving electrostatic speakers straight (possibly without step-up transformer at all) can be pretty amazing[2]. Tube power amp driving low impedance power hungry speakers with heavily reactive load is bad idea.

[1] http://www.stereophile.com/content/vtl-tl-55-series-ii-signature-line-preamplifier-measurements
[2] One of the best systems I’ve heard was SME model 30, Finnish small scale production Illusion pre- and OTL tube power amps driving Audiostatic loudspeakers. It was some 20 years ago, maybe I think it sounded better than it did, but I still remember that experience clearly today. Another system I still remember clearly like yesterday involved Accuphase electronics, quite different beast. Of course I remember lot of stuff with my own gear, but those are the other people’s systems that have left permanent sign in my mind…