You know, sometimes I forget how bloody good Roon is

So Roon Random album (a third party extension - one of many great ones) starts playing a Claude Debussy album I have after a few hours listening and reading the lyrics to “It’s a shame about Ray” as some research for an upcoming gig. 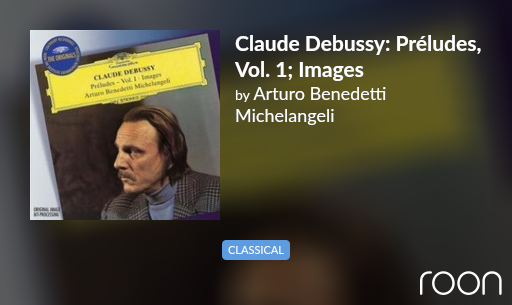 I must have bought this around 2006-7 when I was trying to educate myself more in different types of music. It hasn’t got played much in the intervening years but is sounding interesting tonight.

So I head over to Pink Fish and search Debussy and get a mixture of music threads and DAC threads. There are several recommendations and I simply cut and paste the artist into Roon search, go to discography and filter “dub” and bingo the albums recommended show up.

I add some of these to my queue and add a few to my library as a consequence. 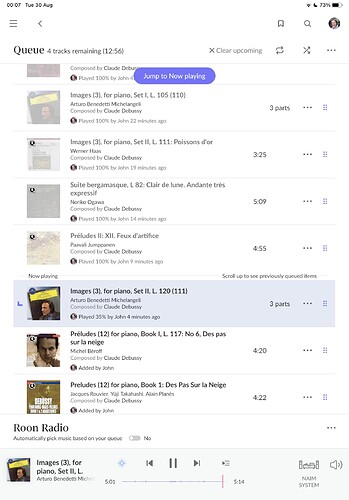 It just struck me this is absolutely amazing as when I was trying to educate myself in classical in the middle of the first decade of this century it involved adding albums (that as you can perceive I rarely listened to) to an Amazon cart after recommendations on the Naim forum. 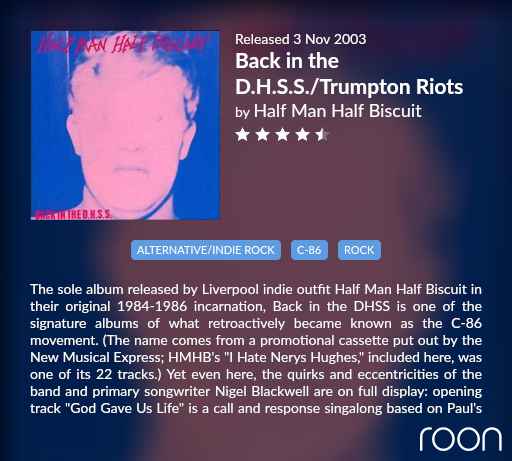 A national treasure as my avatar often said.

God knows I often complain about Roon and there are a lot if irritants but how else could I achieve what I’ve listened to tonight?

Well done Roon, you have enhanced my enjoyment of (my) music no end.

I’m still awestruck by the ability to hear new music on Radio Paradise, click on the band in Now Playing, check their discography and bio and add any interesting albums to my library. No copying or pasting, just clicks.

I had a similar moment today with Roon Radio. Choose a single track as a seed and Roon just kept serving up one fantastic tune after another. Added a bunch of albums to my library via Tidal and Qobuz. I was walking around my house using my phone as a remote, listening through wireless headphones, but could just as easily have sat down at my desk with my head-fi rig, or in my comfy chair in my living room with my primary system, and even via Sonos in my bedroom or a Home Pod mini in my kitchen. Great music all around me whenever I’d like - Roon rocks!

For me it’s the DSP features… and the ability to move what I was just listening to from one setup to another setup.

Before Roon I was really considering to buy the same streamer again to avoid using 2 different apps.

Moving stuff around and groups are two of the numerous great features. I need to install Roon in the downstairs toilet and the wife’s office. Do people use more zones than this? 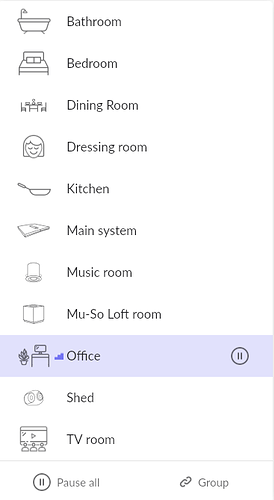 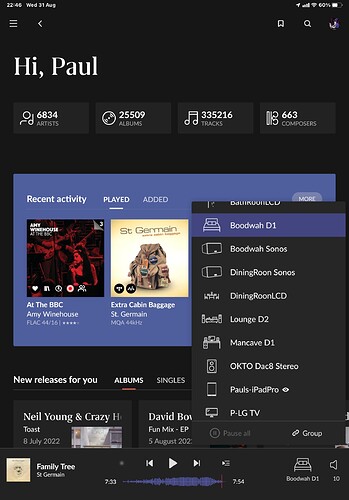 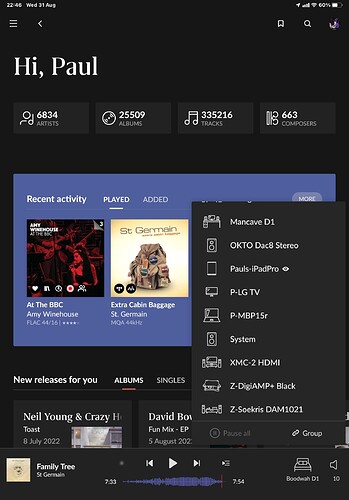 It didn’t occur to call my wife’s dressing room her “boudoir”, especially given French is her first language, I suppose “Boodwah” is an alternative.

It’s a word play … Wah being a local kind of exclamation. So just a bit of fun. Diningroon and bathroon no surprises there

In certain parts of the UK they have what phonetically would be spelt “barf rum”. That would mean something else in the USA.

in many pl;aces that would be well recognized as the latter inference.

I’d like to know more about where 3rd party extensions live for Roon? Thanks, @Sloop_John_B

I think you have me beat.

They are covered in the Tinkering section of the forum.

@Jan_Koudijs excellent Roon Extension Manager is my main one.

They are not plug and play though but the recipes are there and as my uncle used say of you can read you can cook and it’s the same for these extensions.

What are you using for your core, and, how well is it working? Last time we swapped messages here you were at 250k tracks.

I literally can’t imagine having 335,000 tracks

I’m in the Tinkering forum but cannot find anything on “Roon Random album” as an extension/function to 'tinker" into my set up. Thanks, @Sloop_John_B

Short Description Roon Extension to play random tracks or albums Description Within the Roon Community there are quite regularly queries regarding the randomness of shuffle and the lack of the option to play random albums. After reading about this I asked myself the question if it can be done via the Roon API and I thought it was worth a try. This is what I ended up with, I hope it fills a gap. Just Random The extension uses the Browse API to get access to the tracks and albums in your library a…

Ive run a few different cores over the last little while

I like to switch my hardware around from time to time, along with my audio setups too… have many zones mostly using 3 Lumin’s but a few Sonos Play:3’s and Raspberry Pi’s running Ropieee or rooExtend with roonbridge to hats or other DAC’s

Hifi and Computers are my hobby. I also spin vinyl with 5+ turntables in the house. Listening to music is a passion that as I have grown older I find a much better appreciation for and Roon allows me to develop that appreciation better than any other user interface I had found in the last 7 years.

Do you do anything else besides Roon Core with this Windows machine?