Are you talking about re-scanning (extracting metadata – status shown by tapping on the spinning wheel in the upper right of the interface) or re-analyzing (status shown via settings -> Library)?

Re-scanning can take some time, but should be going faster than what you’re seeing. If it’s re-analyzing then you’re running about average and that overall rate is pretty typical.

See the other thread on this:

Is re-analyzing normal after upgrading to 1.3? [Yes] Roon Software

Try adjusting your background audio analysis settings to see if that improves performance: 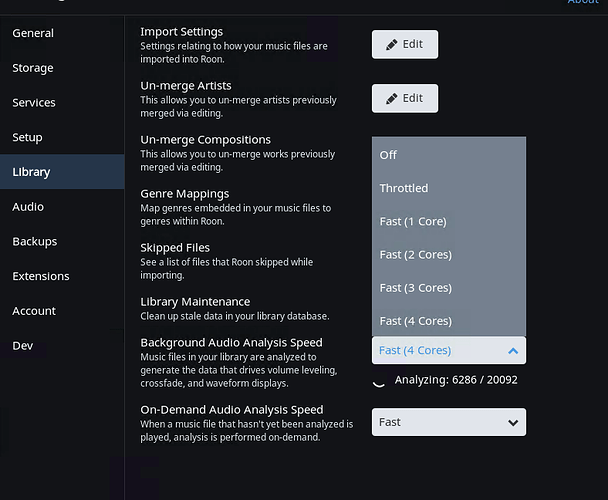 I did, I’m using 2 cores. My Roon Server sits on a Core2Duo I’m sure that’s the reason why. I only use it as my Roon Server, and have everything else turned off, and all settings set for max performance. It’s not ideal, but it’s all I had for a stand alone system in my 2ch room.

I’m on all 4 cores. It’s hard for me to believe over 20 hour rescanning is the expected behavior.

It’s decoding your entire library and performing R128 analysis on it, along with a few other processes. That’s not cheap stuff. 1500 tracks per hour isn’t screaming, but it’s not abnormal. How fast it is exactly depends on both the speed of the CPU and how quickly it can pull the media off of your NAS/Disk to decode it.

Audio analysis happened in 1.0-1.2, too–and it was about as expensive, but back then there was no way to have it run on multiple cores, so it took fooorreeeevvveeeerrrr.

My Roonserver is a Dual Xeon e5-2684V4 and roon background Analysis is set to fast 64 cores and it has rescanned 35K tracks of my 105K total library (mixture of CD quality and high Rez) in 2.5 hours. I am really impressed at the speed and multicore capacity. I was thinking my server was a bit over the top specced until the Roon 1.3 upgrade.

The analysis is slowed down by the speed of my Raid 5 array and I cant play music from my library only tidal as it analyses which to me indicates that Roon is 100% making use of all resources available to it.

My Roon Server sits on a Core2Duo I’m sure that’s the reason why.

I have an old Core2Duo box as a core as well. Analysis took a looooong time, but once done it’s been doing an admirable job of serving up Roon. Even handles some of the DSP functions (upsampling).

Yeah, I’ve had roon for 6 months now and it’s been running well on my old MacBook Pro. Music is all stored on a NAS. I have DSP on now, no hiccups and it’s processing all those files.

I think the guys at Roonlabs deeply impressed us again - conceptually AND implementation-wise!
I have Roon running on a 4 years old Synology DS1813+ with a dual core Intel Atom D2700 at 2.13Mhz (this is certainly not the reference setup for a Roon cosmos). Deep scanning of my 5000+ albums took about 300 hours last month and if I am lucky it will take only half the time now running on two cores.
But there is another major difference compared to the last Roon version: while under heavy processor load there are no more audio stream interruptions or, even worse, stream distortions leading to hazardous static noise on the speakers! Everything seems to be working rock-solid now.
Plus, over a Squeezebox Duet with HD kernel patch audio quality has become audibly better. Maybe the Duet can handle native flac-streams better than the pcm/wav stream of the last Roon version.

Still all normal behavior. It depends on how ‘fat’ your machine (cpu) is

Is re-analyzing normal after upgrading to 1.3? [Yes] Roon Software

yup… see: relevant paragraphs: After updating to 1.3, Roon will re-extract file tags from your library and then re-queue your files for audio analysis. This can place some extra load on your core until that work is complete, so consider this when deciding when to accept the update. Starting in Roon 1.3, we have fully adopted the R128 volume leveling standards. Your music library will be re-analyzed automatically to extract R128 data, and the volume leveling features throughout the app w…

Now it looks like the rescanning is stuck. The progress hasnt changed in 5 mins. Roon is working fine otherwise. My CPU load is at zero so it seems there is no processing going on. Any ideas @support?

Have you tried restarting Roon (or the RoonServer, not sure on what platform you are)?
Did the trick for me in the past when it was hanging on this.

Now it looks like the rescanning is stuck. The progress hasnt changed in 5 mins. Roon is working fine otherwise. My CPU load is at zero so it seems there is no processing going on. Any ideas

Please set aside a copy of the log file that covers this time period. Analysis fills up the logs fast and it would be a shame for this one to get overwritten before Roon has a chance to look at it.

Each time I open Roon the re-analysing goes back to zero. Is this normal?

Background Audio Analysis still going back to zero after each restart. Doesn’t Roon remember the settings after the analysing is complete?

I’ve turned this feature off until the issue is resolved.