1.8 - Albums not properly sorted by Release Date [Ticket In]

I have defined Release Date as my Album date for sorting preference. Release Date is loaded from tags in my files.

However, albums are still sorted by Original Release Date in Overview-Albums in my library view as well as Discography-Main albums.

On the Artist screen Roon 1.8 let’s you select the album sort. On the Album screen is doesn’t. They need to fix this.

I just upgraded to 1.8 recently. I think I experience the same problem as the previous posters. 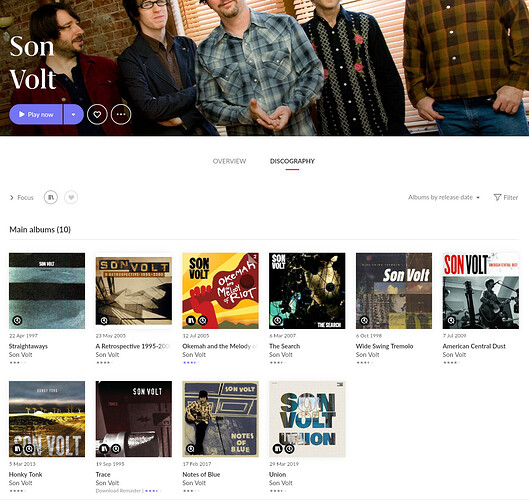 @support: have you been able to look into this matter posted in february ?

If you need any additional information please let me know.

Are you still seeing this issue on the latest build of Roon?
There should have been some changes in this area in one of our recent releases.

it seems that it is much better with albums. The example of “Son Volt” I posted is now sorted correctly.
I still found wrong sortings in the “Albums”, “Singles/EPs” and “Appearances” of some artists though (see screenshots below) 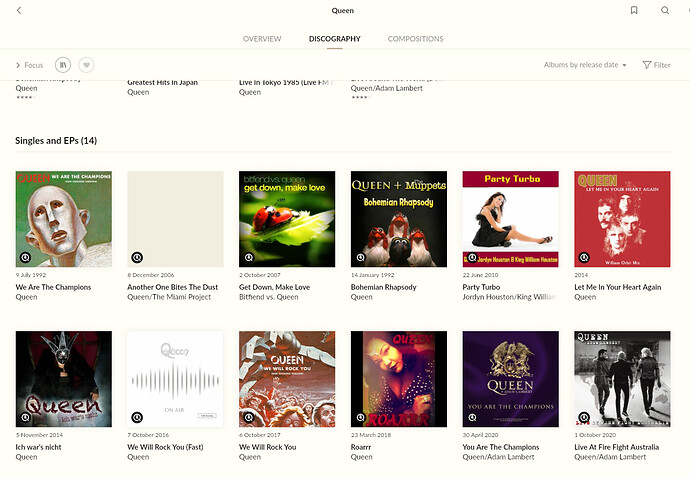 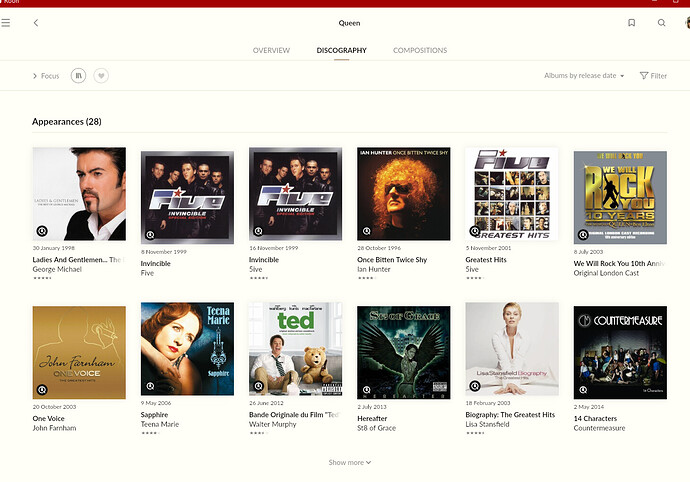 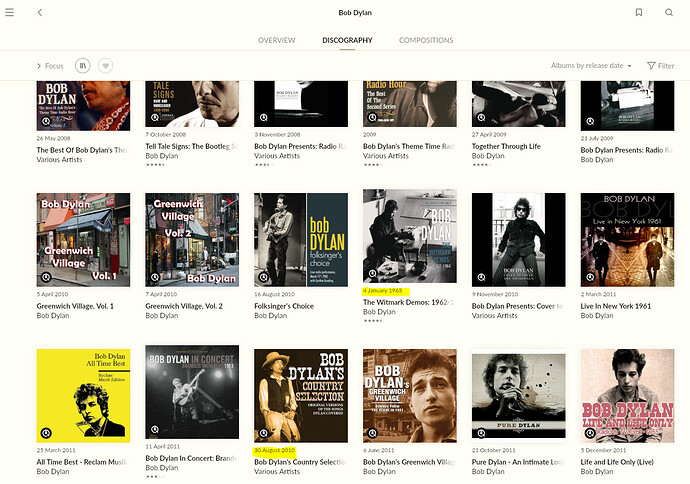 I still have this issue.

In the Library / Import settings, Release date is loaded from files (format YYYY only). However, the Artist / Main album section is sometimes displaying different Release date than the one defined in files and therefore sorting by Release date is incorrect 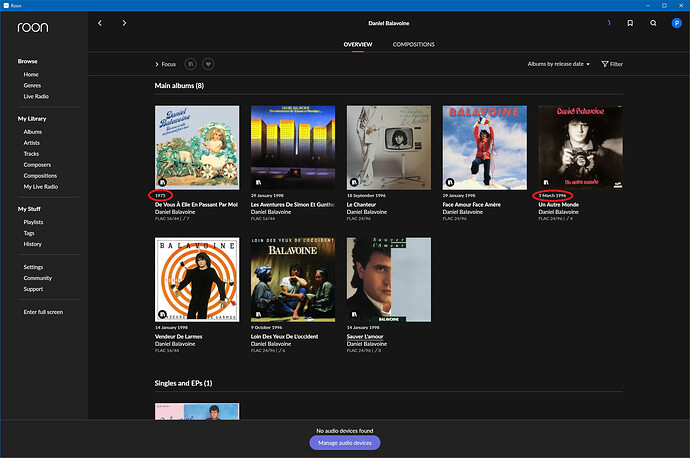 … but the Album details is displaying the correct Release date 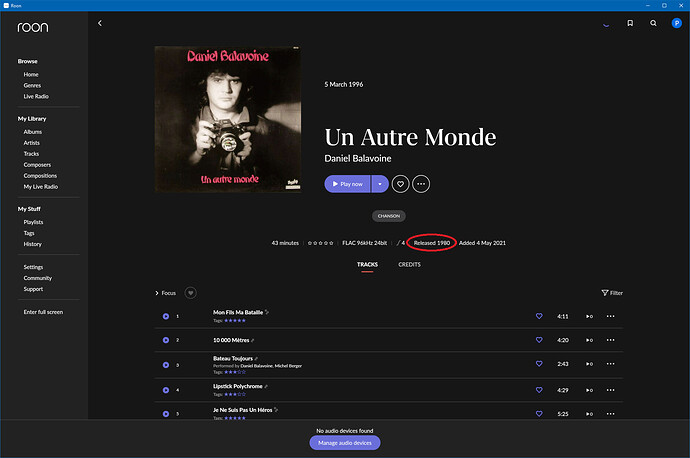 Do you have any mitigation plan for this incident?
Thanks in advance.

Please look again at your own screenshot: 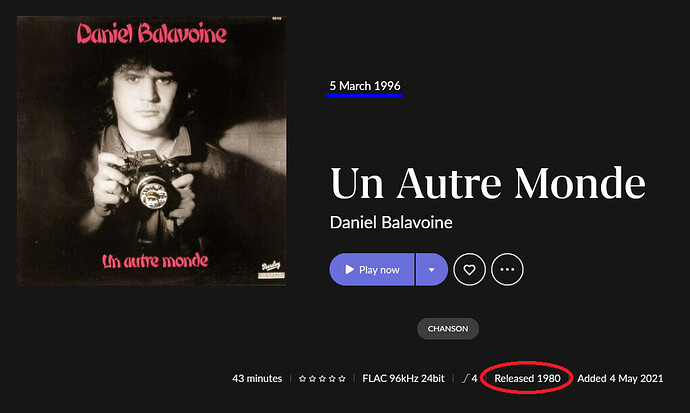 You are right for the second screenshot. Not that simple indeed.

This is the bug to be corrected I think, or displayed dates in screens are to be clarified. The sorting dates was Release dates in the first screenshot (library setup).

If not also in your files, then the original release dates come from Roon’s metadata cloud.

even when Import from files is selected

There is no “import from files only” setting in Roon – only metadata source preferences. For example: If you set the import preference for original release date to prefer file but omit that data in your files then Roon is using the data from its own cloud (if there is any). Read also: Metadata Model - Schema.

For now, I have forced Original release date and Release date to be extracted from files. But I have only one date stored in file so possibly Roon retreives missing dates from its metadata DB. Do you know which are the files metadata loaded by Roon for these 2 dates?

For FLAC and VORBIS it’s YEAR and ORIGINALYEAR. I don’t know about other formats.
For dates use DATE and ORIGINALDATE.

Update : Roon restarted and the bug of my first screenshot is back again…

So I checked each albums of the same artist and there are my findings:

It seems that the Release date used to sort albums is not the one extracted from files as set in Import settings but the ROON one.

@ROON team, can you confirm this sorting bug?

I still have this problem on the latest build of roon 1.8.
Any fix scheduled for this @support?

In addition too, the sorting of My Albums is ok when sorted by Artist, i.e. all albums of the same artist are correctly sorted by Release date as extracted from files.
This is the Artist / Albums in my discography which is wrong. The sorting there gives a different result.

Thanks for the feedback here! Our team is still looking into this. I don’t have any specific timelines I can provide just yet, but we’ll be sure to update everyone when we have more information. Thanks!

I have similar issues since previous versions.

I am seeing a date sorting issue as well. When I sort by release date just within my local library, it seems to sort correctly, but when I choose their entire discography, it is not. See this example of Joe Jackson. In the full library, you can see Beat Crazy and Look Sharp! both are incorrectly placed: