3 copies of a Symphony, only 2 show in count of releases in my library

I will try to explain. Open to anyone with a suggestion.
First, looking at the three items below, there are three (3) copies of Symphony No.1.

If I open the leftmost, the Oslo Philharmonic, I see that there are two (2) copies in my library.

Selecting the library symbol results in showing the other two versions but not the one I started from! 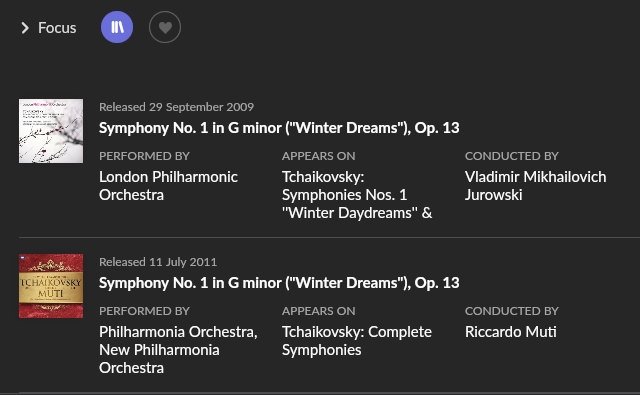 Regardless of the recording I start with the Oslo Philharmonic is not counted and does not show up as being in my library.

Anyone with any ideas where I should start to look?

PS: I have even more versions that are missing.

Maybe yor are a new victim of the “Only complete recordings” setting. It is hidden under the “Recordings by…” dropdown menu. Try disabling this “feature” if you can.

Amazing. That appears to have worked. I just gained four more versions (including the Qobuz versions that previously didn’t show up). There also appears to be no rhyme or reason, IMHO, behind whatever logic is being used. They’re all “complete” recordings. Is this setting documented somewhere?