My workflow for “non standard” albums (i.e. albums where I have modified the album structure after the rip) is as follows:

This workflow (recommended by Roon support in this forum) is very cumbersome, because Roon is unable to clear an album’s cached data and re-read the album from scratch.
Could this functionality be added, please.

This workflow (recommended by Roon support in this forum) is very cumbersome, because Roon is unable to clear an album’s cached data and re-read the album from scratch.
Could this functionality be added, please.

So you’re saying that the re-scan function in Roon is not working for you? 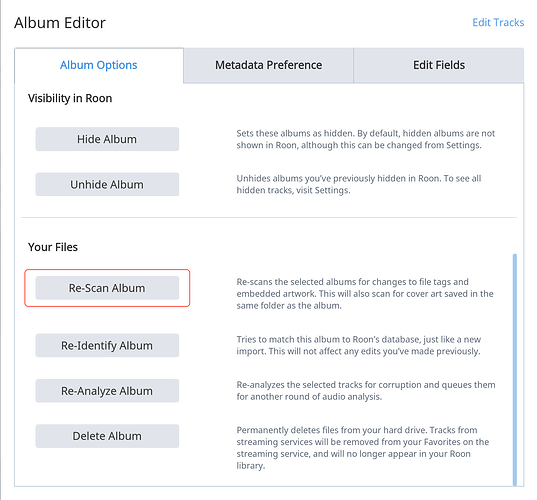 Thanks a lot, Geoff
the re-scan function indeed did the job! The thread I based my workflow on must have been an old one. I can’t seem to find it any more. No problem, issue solved.Thanks.

Sorry, I was a bit too quick here. I did a bit more testing.

I had tracks from two albums sitting in the same directory. Roon detected this as one (unidentified) album.

Then I moved the files to two separate directories. Roon now still considers the contents of those two directories as one album. I tried re-scan, but no change.

I then proceeded to move the two directories to another location (outside the “Roon” directories) and then back to Roon. Still no change.

Then I moved the two directories away, did the library clean-up and moved the files back. This time they were identified as two separate albums.

This issue does exist.

Well, does the issue exist because you had two albums sitting in the same directory - i.e. a problematic situation to start with?

Does it work with other albums where you change tag info and then re-scan?

There may well be an issue here, but I think it’s important to identify the precise use case where it fails.

I have found at least two situations, where the re-scan of an album does not clear the old Roon data and re-scan from scratch

I am fully aware that this case is a problematic one. But I am trying to get my database (which has grown over many years) into a Roon suited form, without having to resort to re-ripping half of my classical albums.

You should never have to re-rip (assuming your original rips are good). Any tidying up of files, tags and folder locations can easily be done in a tag editor. Mp3tag, media monkey, etc.

Thanks, Nick
The crime I committed was to combine tracks of movements within works (i.e. symphonies). My stuff is all correctly tagged (I have gone through great pains to ensure that), but the track numbers don’t line up.

I have
Beethoven - Symphony 5

This is what I am trying to get into Roon in a halfway efficient manner.

Un identify your album and Roon will use your file names.

Thanks, Rugby
But how do I do that?

In the identify dialogue, some albums have several versions. Sometimes one of the versions contains a tracklist that does not contain Roon track metadata. It simply populates with the disc number, track number and track name of the physical file. 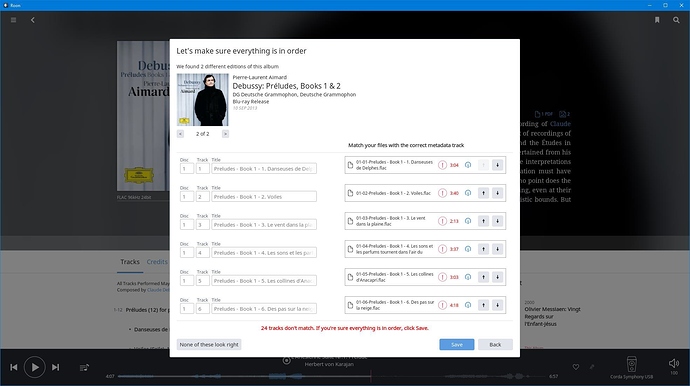 With such albums I have never had the issue of file track metadata not showing up.
If every album in Roon had such a “free form” tracklist, it could be used for all cases where the track order or number of tracks is not standard. This would greatly enhance Roon’s the ability to handle legacy or non standard music material with absolutely minimum effort to the user.

select album, click Edit, click Identify Album, in the bottom right corner choose NONE OF THESE LOOK RIGHT, in the next popup choose, USE BASIC FILE INFORMATION.

There is a way to do what you want ( I think if I am understanding correctly); But, it might cause future Identification Issues, so test and use with an eye to caution.

Choose the album, click Edit, Click Identify Album, Choose the version which is correct. THEN, if you scroll all the way down you will notice a button called ADD ROWS on the Left Side. Add the Rows as needed giving them the appropriate Disk 1 Track 1, Disk 1 Track 2 and your chosen track name. Then, move the tracks on the Right Down to the corresponding Row that you have created on the left. When all is set than click save and you should have the Identified Information with your unique track names.

Thanks, Rugby
You are understanding absolutely correctly and what you are proposing does sound doable. Future identification will not work with non standard material anyway, so I don’t expect that to be an issue. In any case I can always re-identify the album should problems arise.
Just tried unidentifying Aida and IT WORKED! Thanks a million.
Also found an edition of Aida that has the “empty” tracks in version #7. Chose that one and my own track names are linked with Roon’s album metadata. Brilliant, thanks. 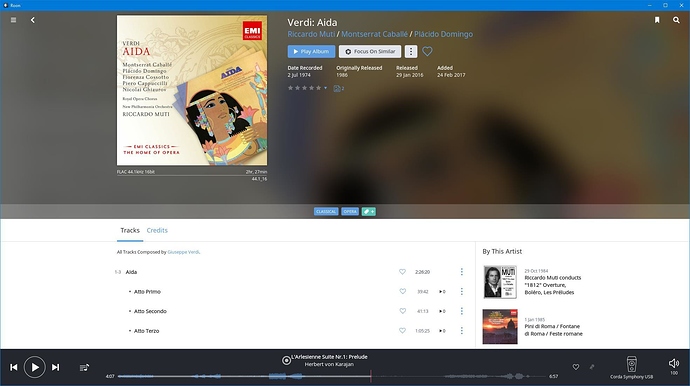