Prefer file for track name does not display correctly

I am trying to make Roon display the trackname contained in the file’s tag instead of Roon’s metadata.
This works in “linear” albums that do not group subsequent tracks.

I then manually identified the album and saved it. In the album view I selected prefer track’s title (file). However, the acts are still listed as

This also happens with other albums that have a hierarchical structure in the Roon metadata.

How can I get Roon to display the file’s track name in these cases?

Have you tried, Hightlighting the first track, click Edit, go to Edit Track, and in the very first section (Title), choosing your file name?

Yes, I tried that. No change.
I even switched the checkmark (and saved of course) back and forth. No change. Still displaying the Roon metadata.

Which ripper / tag editor software are you using, if any ?

Try un- identfying your album. And see if that allows you to use your file names.

Er, why? It seems to me that you’re almost wilfully trying to confuse Roon. You really would be better off telling Roon not to try and identify this album as the three-disc set of Riccardo Muti’s 1974 Aida, but forget about it and treat it as a personal and private recording, thus using the file tags.

Which one of these recordings do you have ?

@rolski: I am using dbpoweramp for ripping and Mp3tag / jRiver for tagging

@ Rugby: Un-identifying is what I would like to do, but can’t find a way to

@Geoff_Coupe: wilfully is a bit of a strong word here. The crime of concatenating files within a symphony was committed many years ago, in my early ripping days. Roon was nowhere on the horizon then. I am trying to use my legacy file structure and get it to fit in with the goodies that Roon provides (user interface, reviews, hyperlinks).

In an ideal world I would like to be able to link any group of music files within a directory (one of my albums) with any Roon album, keeping my metadata for disc number, track number and track name. As it is now, Roon does not seem to cleanly separate metadata at an album level and at a track level.
I am basically looking for a way to deal with imperfect legacy data.

Re-ripping the Aida set solves the problem. But the same problem exists for several hundred other classical albums that I hate to all leave unidentified. It sort of defeats the purpose of my lifetime subscription for Roon, as the unidentified albums stay largely outside the context of Roon.

Yes, sorry, “wilfully” was a bit over the top - but I fear that your legacy approach is causing you issues with Roon. I’ve been ripping individual tracks into \artist\album\ folders for years, and luckily Roon has no problem with this. Combining tracks is, I’m afraid, going to cause problems.

Not aware if there are any plug-in for Discogs for Mp3Tag / jRiver which would help to automate the following, but if you want to try something manually, re-tag this whole album by :

Complete album - all tracks - in one folder.

Third disc…you get the idea…

Have a look in the main menu in Overview & see if the album’s been updated, and if not, run Re-scan / Re-identify / Re-analyse until one of them gives you the correct results.

This does of course rely on your tagging being correct - and the filenames - with the new added ‘file number’.

@Geoff: Actually in many cases it works fine. I set the disc and track numbers to combine with the starting point of the original album and then identify the album and prefer the file metadata.
As long as Roon views the track sequence as "linear, there are no issues.
Only in the cases where Roon has metadata for a sequence of tracks (such as for a symphony or for a string quartet) as well as for the individual tracks, does the problem occur.

Maybe I will need to re-rip the albums that actually have the issue. I was hoping for a more general fix.

@rolski: This is exactly the work I have been doing over the last two weeks. Moving all the tracks of a multi disc album into one directory and setting the disc number tags correctly.
It still takes manual identification of the album, but gets me part of the way there.

[quote=“Geoff_Coupe, post:6, topic:22737”]
It seems to me that you’re … trying to confuse Roon. You really would be better off telling Roon not to try and identify this album as the three-disc set of Riccardo Muti’s 1974 Aida, but forget about it and treat it as a personal and private recording, thus using the file tags.
[/quote] @jacobacci Unfortunately, I agree with @Geoff_Coupe. When individual tracks are identified as a result of being part of an identified album / release of that album, then the metadata surrounding these tracks become pretty immutable. You are attempting to fight what Roon is attempting to do (present the metadata as we understand them to be correct) so I doubt that you will be successful. Un-identifying the album is my recommendation here.

I completely understand what you are saying. I have posted a thought, how this could be resolved in this thread. This functionality is there in Roon and I have used in with albums that have the “empty” tracklist in one of their versions. In those cases it completely solved my problem. Actually I think it would be a great and easy way to catch a lot of legacy music files that does not fit the Roon architecture and allow Roon features such as reviews, hyperlinks etc. to be used with such legacy material.

That said, you’ve given me an idea which I’ll discuss with the team. No promises though…

Thanks, Joel
I understand that Roon’s goal is to be as complete as possible regarding its metadata. On the other hand creating a controlled receptacle for non standard material would be a huge benefit. In my view it would finally open up the possibility for me (and maybe others) to use Roon exclusively. As it stands I have to keep using jRiver because of the non standard stuff.

@joel:
I have played around with the “track title - prefer file” functionality a bit more. Nonwithstanding the previous discussion in this thread it does seem to me that there is definitely something amiss with this functionality.
I have looked at an album which is completely unchanged from the original rip and which was identified by Roon automatically: 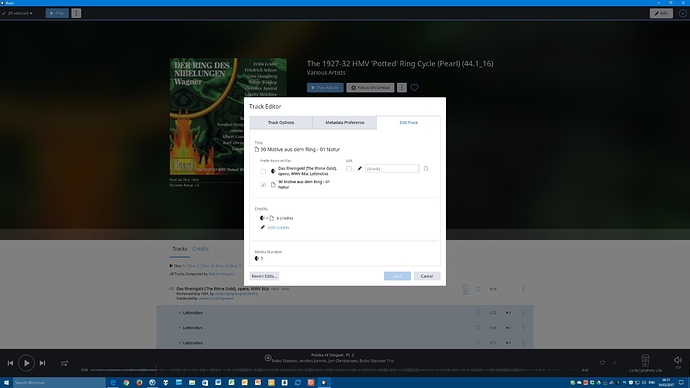 If I chose “metadata preference - track title - prefer file” nothing happens. The (erroneous) Roon Metadata is still displayed. If I try stronger medicine and use the track editor to manually set the trackname to what I would like it to be, still no change. Roon insists on using its own metadata.
If this behaviour is by design, there should at least be a message alerting the user that the change he is trying to make will not have any effect.
A I missing something here?

For multi-part compositions, this is by design. The Roon composition part name will be displayed in the track listings.

Note however that the track title should always be displayed in the “Now Playing” immediately above the waveform.