I don’t know if this has any bearing on the reported AirPlay issues or not, but Roon is showing what appears to be an IP address conflict on my network. Roon is showing two AirPlay devices with identical IP addresses while I can verify at both the device level and at the router that no such conflict exists. 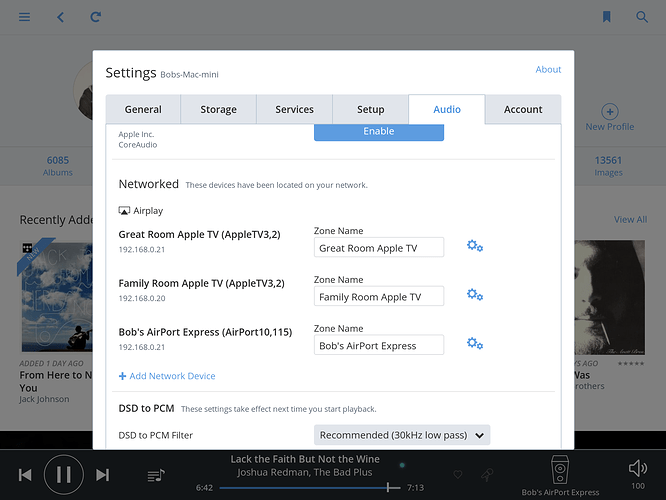 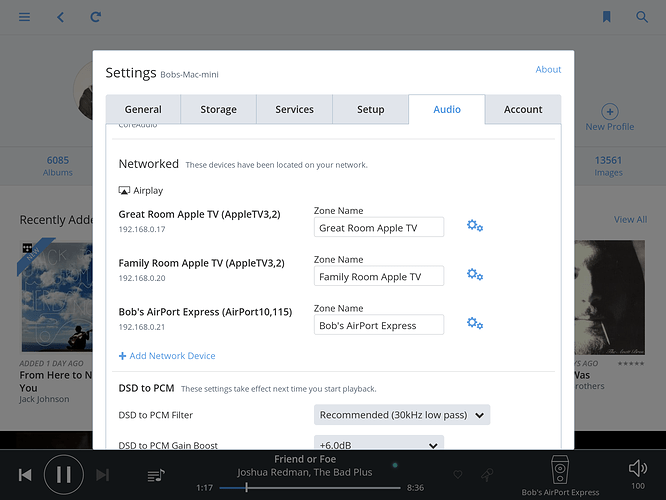 Hey @Bob_Worley - this is an interesting case and we’d like to gather some more information here. Can you let me know the basics of your setup, and how your network is configured. The more details the better – what hardware you’re using, how things are connected, etc.

This sounds like an issue we’ve heard about sporadically but have never been able to reproduce, so maybe something about your setup will be the clue that helps us pin this down. Thanks in advance!

Let me know if there is anything else you need. I very rarely use the Apple TV devices for Roon. Both the Mac mini and AirPort Express are connected to pretty good hi-fi systems. The Mac mini is set up as core exclusive running through an AQ DragonFly 1.2 and I’ve never had an issue. When I first got the AirPort Express I was using iTunes without difficulty. When I added Roon

I began to experience some dropouts. I upgraded the router/modem through CenturyLink and you folks worked on AirPlay streaming and I hadn’t had any problems during the 1.1 build 102 era and perhaps further back than that.

I just happened to notice the apparent IP address issue in Roon when I was nosing around the audio setup screen to see if there were any changes is 1.2.

My congratulations an a great piece of software and superb customer service. Roon has increased my computer audio/streaming experience beyond measure. I can’t tell you the last time I actually played a piece of physical media.

@mike–after updating the firmware on the modem/router I checked IP addresses at the individual endpoints and all were as expected. Roon still showed the apparent (but non-existing) conflict.

On a whim, and because I’d applied the firmware update to the modem/router I decided to reboot everything. So, I rebooted everything on the network starting at the modem/router and including all computers, mobile devices and AirPlay devices.

Now when I check the endpoints in “audio setup” all appears to be correct and expected in Roon. Perhaps rebooting the endpoints caused Roon to rediscover everything and identify correctly?

Hi @mike just wanted to let you know that this issue continues with 1.2 build 128. It does seem that the mis-identification of the IP address has shifted to the other (Family Room) Apple TV. It also appears to clear to the correct IP address quicker.

I’m at a loss and out of ideas to try.

Ok, thanks for the information @Bob_Worley. We’re going to try and reproduce this in-house, and I’ll get back to you when I have some more information.