I have had a couple of issues where the display on the iPad starts showing “blank” images for album art. When I restart the app the images come back. It is not all albums but a lot of them. Roon 1.5 build 323 on a 12.9 iPad Pro.

Thanks for the report @Bob_Fairbairn1 and sharing this observation you have made with us! The feedback and insight are both very appreciated.

Moving froward, to help aide in our evaluation of this behavior may I very kindly ask you for the following:

I have only seen the problem on the iPad but I have not looked at any other devices, I will check them. I force quit the app on the iPad and it worked fine. I have been running the system for several days to break in the DAC playing musing using Roon Radio.

I will test the following if the problem happens again.

How many other apps are running on the iPad…this has quite a large display and I wonder if there some other app thats grabbing graphics memory and roon is coming up a bit short on its needs. Try killing everything else too then see how long you can run for.

iOS does not work that way. The forground app owns the OS UI. Background apps are basically “asleep”. The 2017 iPad Pro models are more powerful than many laptops.

This was an App failure. I force quit the app and relaunched it, everything works. Still could be a client - server problem.

These modern operating systems iOS and Android are rather complex tools that work very hard to make the user experience pretty darn good. I am a part time iOS developer and this thing is really amazing at managing resources.

Just wanted to check in with you here. Have you had a chance to reinstall the iPad application? Are you still experiencing the Album Art disappearing after reinstalling the App? One other suggestion I would have is to see if you can clear the Image Cache in settings, including a screenshot below. Please let me know if that resolves the issue you are facing. 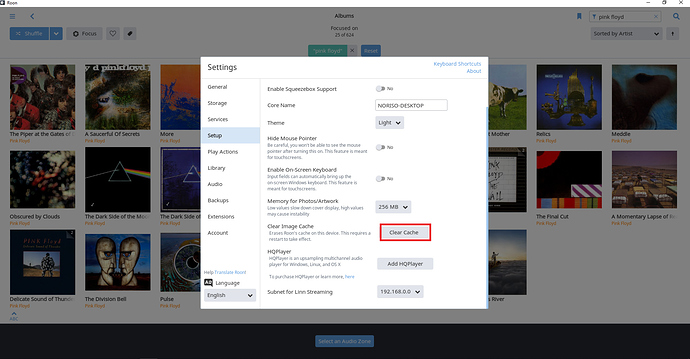 I have not had this happen again. I will keep watching for it and report back if it happens again.

This topic was automatically closed after 10 days. New replies are no longer allowed.