Album artwork changes are not saving

Hello Dylan
I have a similar issue with my content where I’m getting the placeholders showing up. However through the edit function I can retrieve an album cover from the Roon files and line up my tracks if necessary but the cover will not save. The changes in track metadata do save.
What am I missing?
Glenn Q

Hi @Glenn_Quarrington — Thanks for reaching out!

Just to be clear, you’re able to make changes to tracks for an artist, but you’re not able to save changes to the artist itself? Can you give an example of an artist you’re seeing this with, or is it all artists?

Hi Dylan
Thanks for the reply. This problem is only with a few albums and it is just the artwork (covers) do not save. So the track changes (metadata) if needed will save but not the album cover. Here are some: Gentle Ben - Ben Webster and Tete Montoliu Trio; Another Time : the Hilversum Concert - Bill Evans ; All for One - Jamison Ross ; Man from Ipanema - Antonio Carlos Jobim ; The things you love - Matt Bianco and New Cool Collective ; Live in Europe - Melody Gardot ; We get requests - Oscar Peterson trio
Thanks for helping.

Hey @Glenn_Quarrington — I split this off into it’s own post since this isn’t exactly the same behavior being experienced. Having it in it’s own thread will help keep a separation of the two topics so others can more easily find answers they’re looking for later.

This problem is only with a few albums and it is just the artwork (covers) do not save.

Just to clarify here, you’re able to make changes to other album covers without issue?

When you are making changes to the album cover, how are you making that change? Are you going to Edit > Edit Album > Album Artwork and selecting one of the pre-existing options? Are are you adding your own image? Can you share a screenshot of this screen?

Hi Dylan
I usually use the edit function or sometimes the unknown artist function if it is highlighted. I took 2 screenshots for you of the one example. 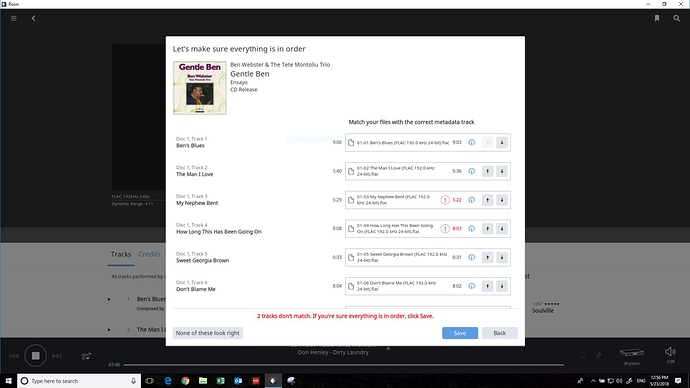 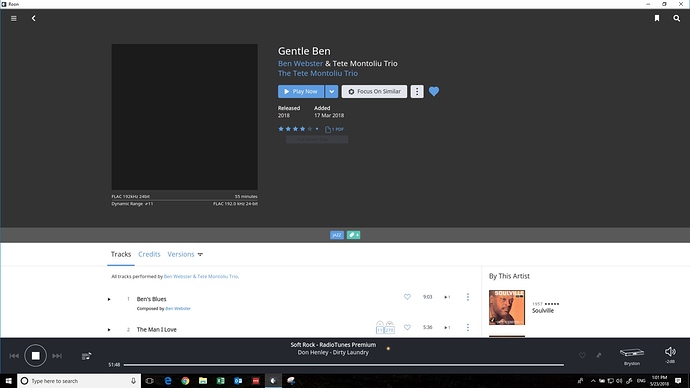 Is this what you meant / needed? I have always been able to find a cover that suits even if I have had to juggle a lot of metadata to get things to line up. This one only had two times that were off a bit.

Thanks for the screenshots, @Glenn_Quarrington.

Once you use Identify Album, if you select the album and go to Edit > Edit Album and scroll to the Album Artwork section, is there album art available for you to select here? See my screenshot as an example. You should be able to find the artwork here (or add your own) and save. 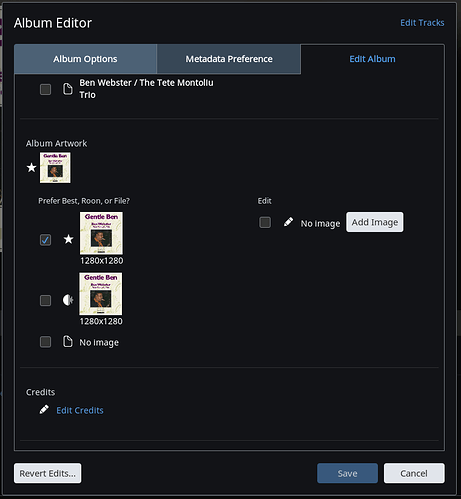 Hello again Dylan
My screen doesn’t seem to look the same. But I can get to a list of album covers and select the one that also works best with my metadata. Please see progression of screen shots. However when 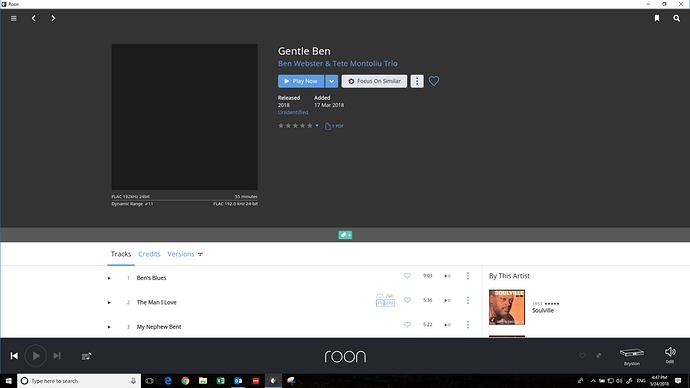 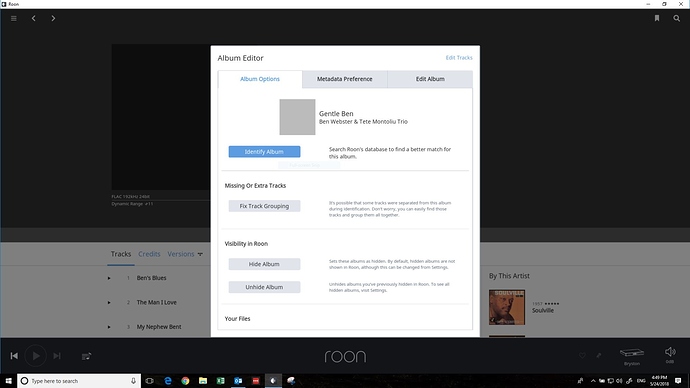 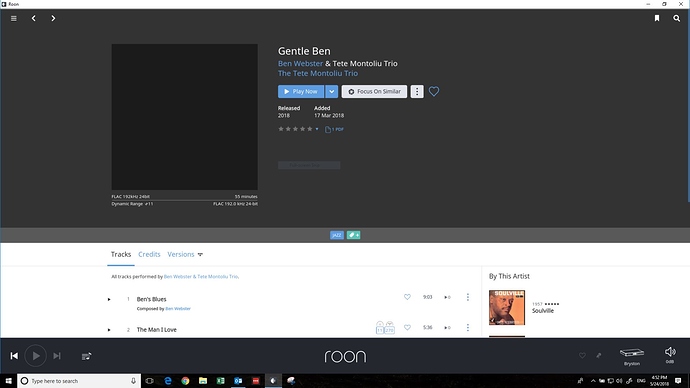 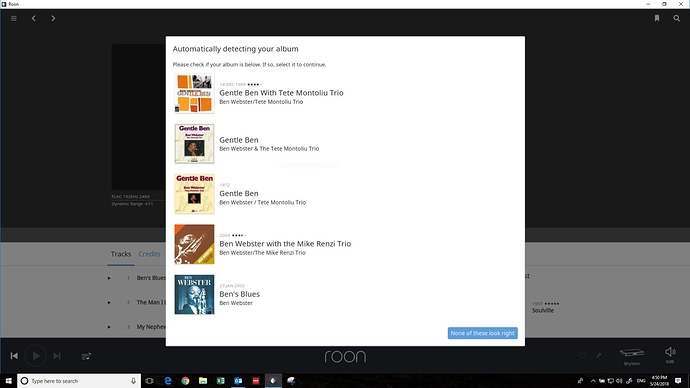 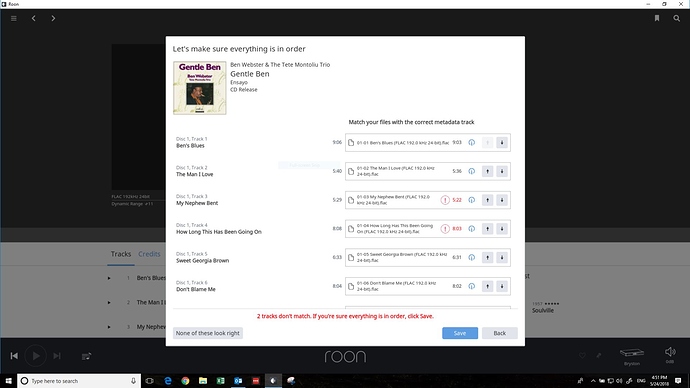 Hey @Glenn_Quarrington, thanks for the clarification there.

The screenshot that you showed here isn’t quite in the same area as the screenshot I had shared above. What you walked through is Identify Album. This is best used if Roon wasn’t able to automatically identify an album, or perhaps misidentified an album. In your first screenshot it appears that this was an unidentified album, so this was definitely a good first step!

Next, to see album artwork options, you’ll want to select the album again and select Edit. 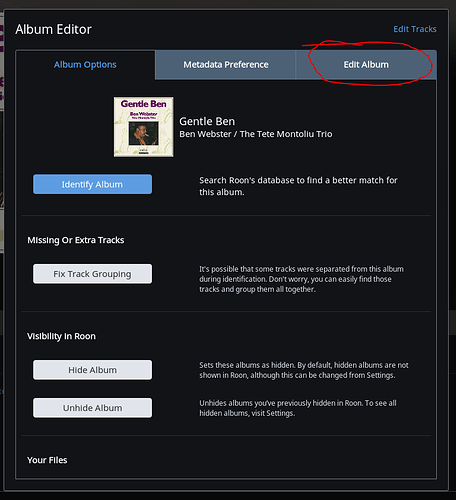 Once you’re on Edit Album, scroll down a bit and you’ll see the Album Artwork options. Is there artwork available here for you to select? 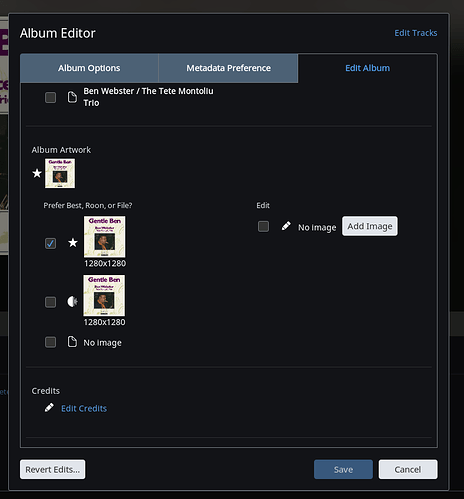