This week I had chance to put together and test amazing Allo DAC & AMP on Raspberry Pi 3. As we have quite a lot discussion in Roon Community on DACs & Raspberry Pi solutions, I thought to share my impressions.

It is whole stack of 4 great performing products created by Allo team:

Antelope Zodiac+ is certainly setting threshold very high, and Audiophonics I-Sabre V3 DAC has very good reviews as one the best Raspberry Pi DACs out in the market even outperforming both HiFiBerry DAC+ Pro and Mamboberry DAC.

Following were my findings:

Set-up of the system was fast and easy – 10 minutes and I got stylish open-work design on my home-office table. The build quality of all boards and acrylic case is solid. My only critics is plastic screws and standoffs, as the screws when tightened tend to jump over turns. It would be better, if Allo would supply metal black plated screws and standoffs. 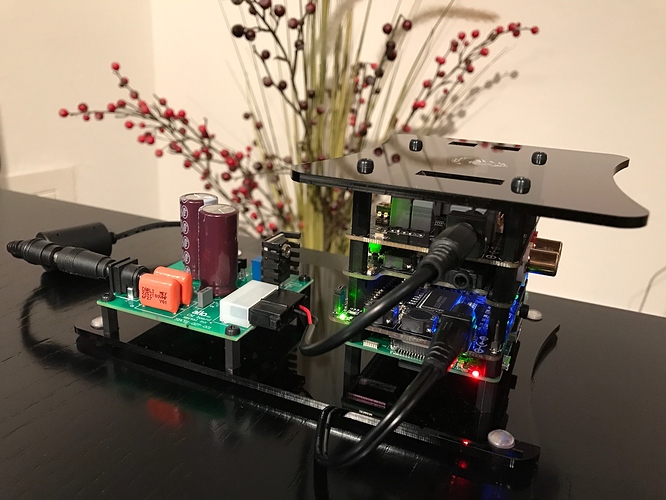 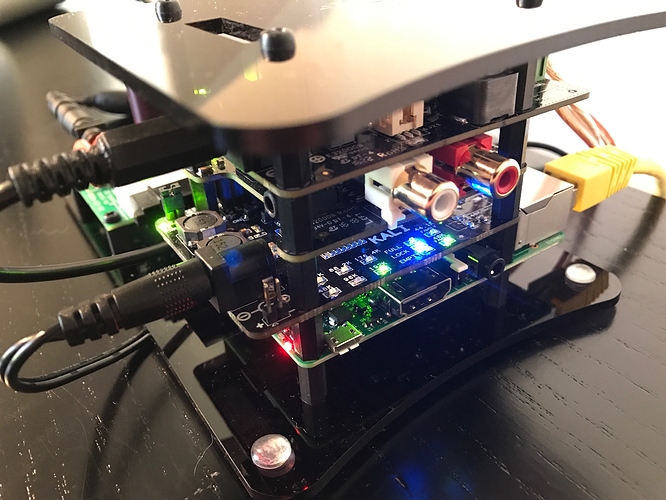 My 7 years old son was excited seeing it, and after “woow” named it computer in four levels; and my wife named it Japanese house.

As SW I was using standard DietPi and Roon bridge installation.

Allo works with both in DietPi default available HiFiBerry DAC and IQaudiO DAC drivers. However, I wouldn’t recommend to use HiFiBerry DAC driver, as it doesn’t allow HW volume control functionality.

I found way to install Allo Piano audio driver with the below set-up, but didn’t find any incremental sound or functionality benefit of it.

Then restart and test if Allo driver has loaded:
aplay -l

Thanks for the extensive write-up – loved reading it. Nice pics as well – I especially liked the floral arrangement.

I think the 384kHz issue is kernel-related. Moode will be releasing a version of their MPD distro soon, with a patched kernel for audio enabling 384kHz on a wide variety of boards (HifiBerry, IQ Audio and I’d guess the Allo boards as well).

As for the ‘krakrck-clicks’ – this could be related to the auto mute function. On my boards, I set the Auto Mute Time from 21ms (default) to 10.66s (max) through amixer or alsamixer, which gives a much larger mute window, avoiding the soft plops during normal use.

I’m running a HifiBerry DAC+ Pro > CSB503HTA Tube HAT > AKG K550 headphone chain to very satisfactory results, but your write-up makes me me want to get some Allo boards for good measure. Time will tell whether I’ll be able to constrain myself.

@RBM, thank for info on moode. Lets see if dietpi or max2play do 384kHz too.

Can you please give the example of mixer command line you use for setting Auto Mute to 10.66s?

Yes, Allo stack is for me is top sounding RPI solution I have hear so far, and I like/ use all three functionalities coming from it: DAC, headphone amp, and speaker amp - all without compromise.

These kernel patches will be more widely available over time I guess, but Moode may be an easy point of entry (it also has support for Squeeze, Crossfeed and DAC DSP baked in).

The amixer commands are as follows:

You can also set the controls via alsamixer: 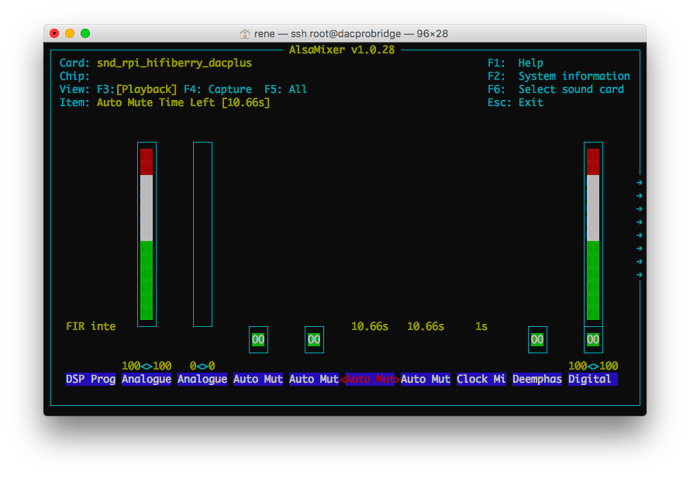 I bought the Tube HAT off Kickstarter since I thought it was and outrageous gimmick that deserved support, but it actually sounds quite nice. (Disclaimer: I use my headphones for only 2-4 hrs a week while reading, so no really critical listening involved).

That’s why I’m kind of on the fence with the Allo boards: limited headphone listening time – and in my other zones (Meridian DSP5200 & F80) I’m all set digitally with a Pi/Digi+ Pro and a Cubox-i.

Thanks,
This indeed sometimes removes kicker on the start up play back, but not always.

Unfortunately, 5 seconds after playback has been paused there is still kicker, and sometime also on start of new playback.

Hmmm. The HifiBerry is dead quiet in the 10 sec. time frame, as is the IQ Audio. You can verify in alsamixer whether the timings are the same for the Allo board (I guess they are).

Could you share your expirience with Audiophonics 9018M2K DAC? Does it provide a ‘better’ sound? Is there a linux driver for this chip? I could not find any review on the Internet.
I am considering using it together woth Kali, so your feedback is very much apriciated

It’s finally shipped.
Will test and write separate review end of next week.

Not aware of other review. Audiphonics started to ship it only this week after some FW updates.
It promises DSD playback, and in general (outside of Raspberry PI) the 9018M2K is highly rated…

Yep, that makes sense. In fact these were exact same reasons I am considering 9018M2K as well. I saw several posts about poor driver support from linux. So much looking forward for you review

Very interested by your feedback too. Specially about the es9018k2m harware volume control that is supposed to be working on this kit.

Unfortunately, there is nothing to report.
I can’t get it working. No clarity and real support from Audiophonics team to set it up.

Hi, Some of you were asking for feedback on this DAC - IT IS NOT WORKING PRODUCT OUT OF THE BOX There is no documentation available to set it up There is no driver provided, as ES chipmaker doesn’t allow Audiphonics to put it in open source There are three theoretical modes how it could be operated, but without clear documentation There is no real support available from Audiophonics customer service (some irregular & unclear emails only, so seems they do not know yet themselves how to configu…

I was tossing up getting the VANA bundle as the Sparky looks to have better specs than the RPi 3 and maybe less heat issues. Anyone tried it?

Doesnt seem to be any DietPi version for the sparky tho which is a shame.

I bought the Vana Bundle. I couldn’t find any s/w for the sparky, apart from Max2play which you have to pay for, so I ditched the sparky and replaced it with a RPi 3. Loaded DietPi up and all works fine. Quite impressed with the sound for the $$$. I have absolutely no heat issues at all with any of my RPi 3s.

The Allo website leaves a bit to be desired and the documentation isn’t quite right in some areas and the pictures are sometimes wrong but you can work it all out. The good things I think are the Kali reclocker and maybe the capacitance multiplier (although i havent tested with and without it.)

I think I will perhaps be building a linear supply for both 19V and 5V if I do get this option.

As long as it works as a roon bridge I will be happy…so far the IQAudIO DigiAMP+ is giving me some output issues … looks like its all well but I can’t rid of the MUTE led being lit and thus no output.

That mute issue has since been sorted

I haven’t tested IQAudIO and HiFiBerry products on switching and linear PSUs. Might be they need such to do quality DAC processing.

However, I tested both Audiophonics and Allo DACs with good quality switching PSUs and linear Audiophonics PSU.

Following, were my listening findings:

But you can find it on eBay too

So, my conclusion from RPI tests with use of the Audiophonics & Allo RPI products - do not waste time & money on linear PSUs with these two brands. Allo Piano DAC with built in power-management circuit, and Allo AMP with CM gets as good as it can be.

If you want to be in the real game then go for 20,000$ set-up: Antelope Zodiac Platinum DAC with atomic clock and linear PSU, plus real amplifier.

Haven’t see any heat issues on RPI with Allo Vana bundle running on RPI 3.
It’s on my table running with DietPi, switched on all time, and just warm.
Unless you do some graphic tasks, server functions, or what ever else than playing music, then the RPI doesn’t heat up.

There is not really much load on RPI CPU with dozen tasks in DietPi, plus Roon server and separate DAC performing heavy tasks.

And if you really like to have cool look - you can always purchase and stick on RPI two radiators for 3$.

Thanks for great review.

However I would like to know if you can test Audiophonics I-Sabre V3 DAC ES9023 with Allo Reclocker? I think that it would be interesting to compare it with Piano + Reclocker to see which DAC board can play better. If I am not mistaken Audiophonics can work with reclocker.

Sorry. Can’t. As the performance was poor, I returned it back to Audiophonics.

The new ES9018K2M I just purchased was also not functioning:

So, I shipped also ES9018K2M back to Audiophonics. I asked them to return ES9018K2M to me, if and when they finish product development and create serial scripts to drive it from ALSA.

Anyhow, be very careful with Audiophonics products, and know what you take on before buying them. Customer service is very slow and non-responsive. Products are for DIY enthusiasts accepting engineering components, and investing days to get them to work. No documentation provided, and bare minimum information is in french.