as a music playback device the sound stutters/crackles endlessly

Started my subscription just ealier today and I have the same issue here. Stuttering and cracking also when Roon is not displayed.
Really annoying. When is this going to be fixed?
I don’t have this with any other audio app.

We currently have a ticket open with our development team regarding this issue. As Mike mentioned in his post here, we can’t provide any specific timelines, but we absolutely plan on addressing this issue.

I also spoke with @eric and he mentioned that you’re having some visual issues as well. Is this only in the menu or in other places as well?

I also have this issue. It didn’t happen before so maybe something in the newest update? My LG G7, when used as an endpoint, makes horrible crackling sounds when Roon isn’t on the screen.

The visuals issue happens everywhere in the app.
I added a screenshot, do you have it?
If not, I will make e new one next time I have this issue. It usually happens when I haven’t used the app for some hours or a day or so.
I then go into Android App settings for Roon, stop the app and than open Roon again and the visuals are fine again.

For the sound/audio issue, at first I thought the problem might be with limited bandwith due to a bad wifi connection, but when I use Qobuz directly to stream CD quality, I don’t have a problem.

Another issur I have from time to time is that I receive the following error:
‘Unfortunatly, Roon has stopped.’ 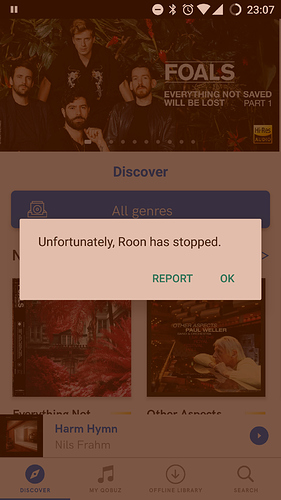 If not, I will make e new one next time I have this issue. It usually happens when I haven’t used the app for some hours or a day or so.
I then go into Android App settings for Roon, stop the app and than open Roon again and the visuals are fine again.

Eric shared the screenshot you sent him with us, but a couple more screenshots of what you’re seeing on other screens would definitely be a great data point!

Are there any patterns that you’ve noticed leading up to the UI issue? Any other apps that you’re using? Is the device idle and then upon returning to Roon it appears this way?

Another issur I have from time to time is that I receive the following error:
‘Unfortunatly, Roon has stopped.’

Have you noticed any patterns here? Does this occur when the app is in the background when you’re using specific apps? Does this ever pop up while Ron is in use?

Will make some more screenshots when it happens again.

For the rest, I don’t really see any patterns for the ui issue or the error message.
The ui issue just happens at random, when the app was idle for a while (hours or 1 or more days).
The error message, totally random.

Just had the error again. Looks like it happens when I press play or pauze in the Roon app and than move/switch to another app.

Does your device have any battery optimization settings? Do things improve if you exclude Roon from those types of settings?

No battery optimization.
Do have blue light filter, Twilight. Turned it off now, will see how if it helps next couple of days.

UI issue happened again earlier today. Used Roon yesterday to control another endpoint.
Used it again later that day and the issue occurred. Did not do anything special. 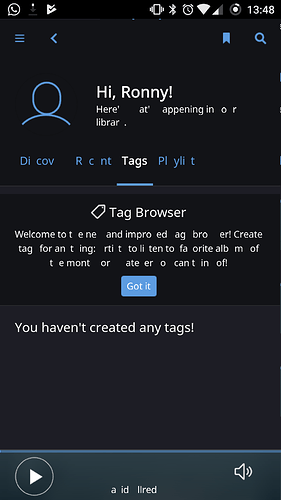 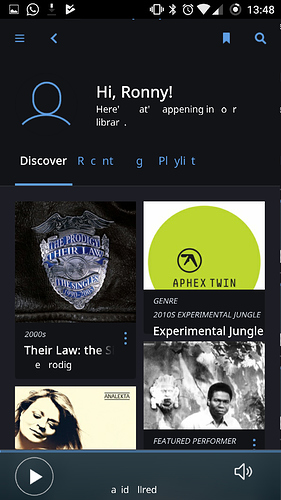 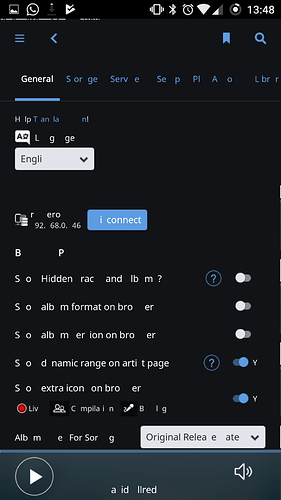 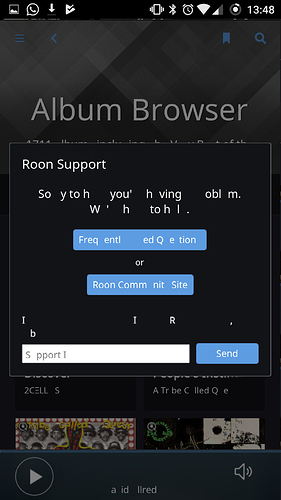 For the issue with the error message, ‘Unfortunatly, Roon has stopped.’, what happens here is that the local zone stops working. I’m still able to select another zone and control it, but not the one on my phone. 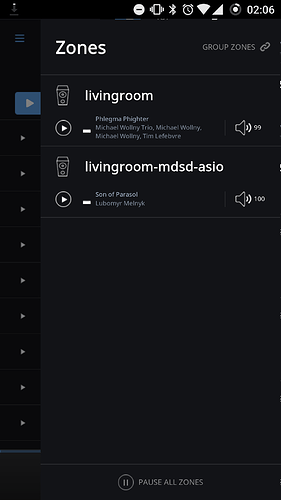 Thanks for the additional screenshots here, @Ronny_Ruyters.

Thanks for your patience here. I spoke with the team about this and, based on what they’ve found in the diagnostics report and the symptoms you’re experiencing, it appears that your device is running out of video memory. When this happens, you can experience the visual issues that you’re seeing here.

Some things that can help here include:

Ultimately, this type of behavior depends on the GPU and how much video memory is available on the device.

Thanks again for your patience and cooperation here! Give the suggestions above a try and let us know if you have any other questions.

Thanks for the response.
Going to try and lower the settings.

So , did you fix your problems?

Regarding the UI issue, it’s much better now. I ow make sure I don’t have too many apps running.

Am also runnin Roon now on a new tablet, Samsung Galaxy Tab S5e with 6Gb memory and have not had this issue yet.

The stuttering and crackling issue still exists, also on the new tablet.

How are things with with the stuttering and crackling issue on android playback?
Is there any progress, because this issue has been existing for quite a long time now

I can’t provide any specific timeframes at this time, but I’d like to point you to our latest release notes which addresses this:

While this Android build doesn’t include other visible changes or new functionality, there are major changes under the hood, including support for 64 bit Android builds, and fixes for a number of long-standing annoyances, including graphical issues.

Most importantly, these changes will enable a number of upcoming projects on Android, including an overhaul of audio playback planned for later this year.

Roon no longer seems to stutter or disconnect when the screen goes dark ( galaxy note 9) however it does stutter if you navigate away from roon. I found a way to circumvent this by opening the page I want to navigate to as a “popup” over roon. I can adjust the screen size of the popup to almost fit the phone screen and voila, no stuttering issues!

Thanks for the tip! I’ve been having the same problem on my Note 9

I also experience cracking and even pausing of my music while Roon app runs in the background on a Galaxy Note 10+.

I have to bring the app back again to surface for the cracks to stop.

I tried all possible fixes like disabling memory optimization for Roon, adding a bit ‘‘re-sync delay’’ or setting Artwork memory to ‘‘minimum’’, all to no avail.

At all times Roon App has to be on display and even with the screen on in order to experience seamless playback.

As I’m out of ideas I will be grateful if anyone has something to suggest.

Judging from the lack of response, I reckon this is an issue that has not been addressed effectively yet.

What a shame as the majority of mobile users are now on Android while it’s not an issue with end device (client) memory as mine has a hefty 12gb and have yet to see in real world anything over 6.5gb being utilised…

It rather seems like a poorly written mobile app that does not handle resources well.
I hope there will be a solution soon as I want to like Roon and go lifetime but this issue is a deal-breaker for me.