As I found out in the thread Merry Christmas - Anything Hifi planned for next year? that here are indeed some tube heads around, I thought it would be interesting to find out what tube gear other people are using and not to be too off topic in the other thread to start a new one.

I use a Rogue Audio Sphinx, it has a tube stage.

I use a Rogue Audio Sphinx, it has a tube stage.

Is this a hybrid amp, then?

MB-125 monoblocks power and TL2.5i preamp by Luke Manley of VTL. I love the sound of EL34, it sounds sweet and yet have the power to drive. 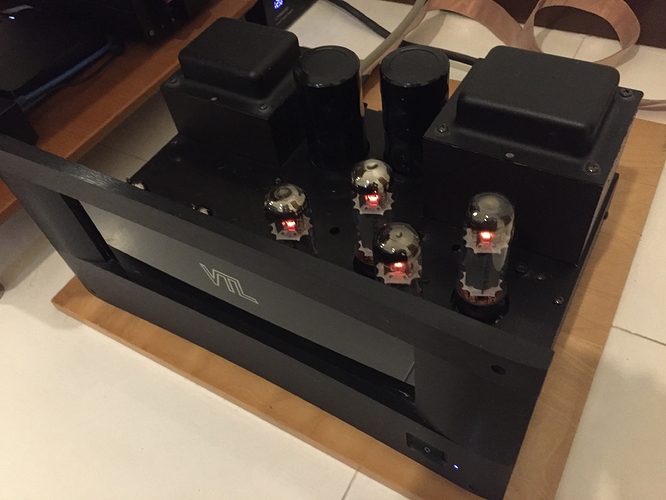 A selection of amplifiers in my case.

Mine are headphone amps.

I use one of these tube buffers down stream from my Schiit Gumby. Adds a touch of warmth that I find pleasant.

There must be something about those EL34 tubes.
Some ears I trust tell me they love the typical sound of those small tubes

2 years ago, I auditioned a second hand pair of horn speakers and the host set them up with a TL 5.5 ll preamp and a pair of Pass XA30.5 monos.
When we entered the room on the first notes, my friend turned around and wanted to leave, it was that bad.
Dead, flat, boring, the sound was glued to the chassis of the speakers.
Wisely/luckily I brought my own KR Audio 350i integrated amp along and after half an hour of aural torture (I hoped the system would warm up and improve) I asked if can hook up my amp and even stone cold directly out of the car it made the quite expensive VTL - Pass combo sound like broken (I blame the Pass monos though

)
It now sounded so VERY good that immediately bought the speakers, even though I already had more than enough very good speakers

Wow.
That is quite a collection of gear

I’m almost ashamed to name my tube amps: both downstairs and upstairs an APPJ PA0901A, AKA the MiniWatt. Power tubes: EL84’s, driver tube: 12AX7. An earlier version of it received some positive reviews, for example on Six Moons: www.6moons.com/audioreviews/miniwatt/miniwatt.html

I think, however, that most audiophiles here will look down on them. They’re really my first and affordable step into the world of tubes, after only solid state amps. And I must say, they even drive my Klipsch Heresy’s II quite well.

A friend has two DYI monoblocks (on a solid stat pre-amp!) and Klipsch La Scala’s, plus a larger living room, so it’s no wonder that his system has more punch. But for now, I am reasonably satisfied. I have had mine for two years now, and Roon for a year, the next step being a HAF room correction filter early 2018.

After that, perhaps, when budget (and the wife

) allows, I’ll start looking for an amp upgrade — tubes again, obviously! Meanwhile, if someone already has some good and affordable suggestions, plus a motivation of the choice, I’d be very interested!

Never heard of this stuff

Will have to google

five years ago, when I first read of him on Six Moons, I immediately got curious, but being skeptical

I only went for the cheap line (though asking him to pimp it up: silver wiring, Sprague Atom caps, Cardas binding posts, Kimber RCAs)

three months later I resolved going for his truly serious stuff (waiting line for these was about three years)
May this year he wrote me he was going to start building mines and we agreed on the last details. I was eagerly waiting when…

I have an Audeze King Mk 2 headphone amp for my Audeze LCD-4. It’s a tube/MOSFET hybrid.

Wow! That must be one of the best headphone amps on the planet. Congratulations!

I play music with an Audio Research pre-amp.