In ARC under the Albums and Tracks view in my library I noticed a filter toggle.

What does this button do?

I have music downloaded but the toggle is greyed out and I cannot press it.

Thanks for any help in advance.

This shows your locally downloaded music, tracks, albums files, etc. (These are the files you own, not from the ones from streaming services) 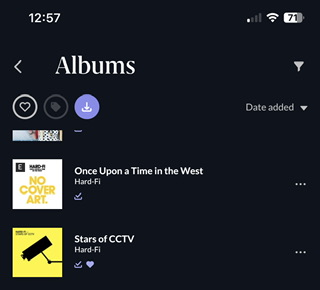 Once the files are fully downloaded, you can filter them from un-downloaded files

if you’ve reinstalled ARC on your phone you may have lost your downloaded files.

Try downloading another album and see if the button becomes active again.

Thanks @terzinator and @Formula. I thought so that the button filters for downloaded files but it does not work for me. I have four albums fully downloaded but the button does not filter for me. I had to re-install ARC because of another issue with downloaded media but this button has never worked for me. Not before the re-install not now.

Here is a video where you can see that I have music downloaded but I cannot filter for it in Albums. Obviously you can’t see the clicks on the filter button. The other two filters (favorites and tags) do work.

What do you see when you go to Home and tap the Downloads button top right, next to the Settings gearwheel?

I see my downloaded albums. Same view basically as when I go to Library and click Downloads there.

OK. Then the behavior with the other (filter) button surely can’t be right. You could try resetting the ARC app, it often helps, but that deletes your downloads anyway

Yeah thanks. That is very strange. I had to re-install it a few days ago already, as after the last update the Downloads buttons next to the Settings gearwheel was also missing… Very strange behaviour of the app since the update.

Did you download the albums as a playlist or did you downloiad each album individually? ARC does not regard albums downloaded through a playlist as albums. That is consistent with how roon regards tracks in a playlist - it doesn’t show them in albums either. Both do show the album title and art for tracks in playlists, but neither aggregates those tracks into an album.

I did download them as complete albums not as playlists. All my four downloaded albums are also completely downloaded and not just individual tracks.

Don’t know what to tell you. For me, the download filter works as expected with albums I individually downloaded but not with those that were included in a playlist (consistent with roon’s handling for playlists)

Thanks anyways. I don’t know what it is but this update is really, really wonky for me.

Reset the app, re-installed the app, restarted my iPhone twice, still same issue. Maybe the next update will help here….

I know now what the problem is and I think the app should not have this problem:

Sorry, but this is really stupid. ARC should know that these are two versions of the same album… To work around this I would have to select my local music files as primary versions in Roon first and then ARC recognizes them correctly.

You never willl be able to as has been said so many times, it is just not allowed in the t/c streaming services have with record labels no 3rd party downloads.

I think i I have ran into this as well and just confirmed the behaviour. @support can we look at this as it does seem to be a bug or glaring oversight of how the focus works on these.

Moved this to the support thread.

Sorry I haven’t read that yet. I don’t spend that much time on this forum.

They could make a link to the Tidal app themselves at Roon to see what downloads are there and then play the downloaded albums from Roon without Roon having to do a download himself. Good for Tidal and good for the artists who could be played more from ARC. Incidentally, Tidal really has to rely on 3rd parties.

Surely Tidal didn’t give Roonlabs the decryption key for Tidal downloads, so no