Bang for buck the ARM devices are great value while other Roon Ready solutions appear. Raspberry Pi has an Audio Product category all to itself. This thread is a general thread for similar small ARM devices.

Rene (@RBM) has made an extremely helpful guide for the Raspberry Pi and Cubox-i here. Most of the things that he has said in that thread can be adapted to other ARM devices.

There is a thread about using the BBB as an HQP NAA here..

I’ve been using a Cubox-i because I want it to be an HQP NAA and receive DSD128. The Pi2 has problems in that regard (shared Ethernet/USB bus) which I understand are improved but possibly still present in the Pi3. The IQAudio and Digi+ boards avoid those problems, but I prefer a USB out.

I have ordered a microRendu (Ethernet/USB) and am looking forward to how it performs. A lot of credible people have said good things about it.

Until we start seeing a good crop of RoonReady devices, I think the small ARM devices preserve flexibility and provide very acceptable SQ. Rene has done a great service for the hobby with his easy to follow instructions about setting them up. Some may find that they don’t need anything more.

It would be nice if we could see some better hi quality cases. The Bryston one looked very natty (as it should for the price).

The Beaglebone has USB out and doesn’t have the problems the Pis have. USB and ethernet are on separate bus.

Agree with fritzg. The BBB is a fine small ARM device and handled DSD128 without a problem. I was also able to burn the NAA image to the internal memory rather than boot off the micro-SD which gave it the fastest start up time.

I can’t quite remember why I’ve stuck with the Cubox-i rather than the BBB. I think because the Cubox was the last device I experimented with and I prefer the shape.

I also burned my image to internal memory. And I use this awesome case. 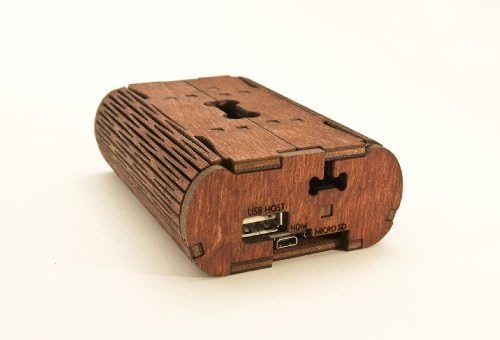 Enclose your BeagleBone Black in this amazing wooden case. The living hinge is central to its design allows it to open and close in a truly unique style. Amaze your friends and show off how easy it is ...

I made this a separate thread because it seemed a bit rude to talk about the BBB in the IQAudio thread. Any BBB related posts welcome here.

@fritzg that is such an awesome case, that it has inspired me to start a Case Envy thread. Particularly impressed with the external Power and Reset buttons.

Might make sense to start a thread for ARM based Roon Bridge endpoints. I’m using the ODROID C2 with great success, albeit until Roon Bridge for aarch64 is released it’s not a straightforward install, which the C1 would be as it’s armv7 based, like the BeagleBone.

That’s such a good idea I’ll edit everything to make it look like it was what I did to start off with. No one will notice a thing

Hello, Im am using RPi 3 without problems. But when I use the BBB I experienced Clicks and pops randomly and more notice with hi res audio files. Some one is having this kind of problems, the there a SD image with Roon preinstalled for BBB?

I use the image Chris made for the BBB and installed RoonBridge on top of it. Works perfectly for me.

Can you tell us more about the installation process in the ORDROID C2 please, it is too complex?

Here’s some guidance re getting it done in Debian

Support for ARMv8 as well as ARMv7? [Coming in 1.3] Feature Requests

So I made it work. Quick info: one needs the hybrid 32-bit edition from ODROBIAN Jessie (64bit) & (32bit). This is the direct download link as of today. Full solution (I may be missing some steps, because I’m reproducing it from memory): After booting the new distro, login as root/odrobian. Execute apt-get install curl Execute apt-get install libasound2 Download the ROON BRIDGE automatic install script. Here comes the fun part: This is a bit of hacking, because we disregard the machin…