Click on the booklet icon on each track, to get track credits. Assuming the metadata is good, they can be different for each track. 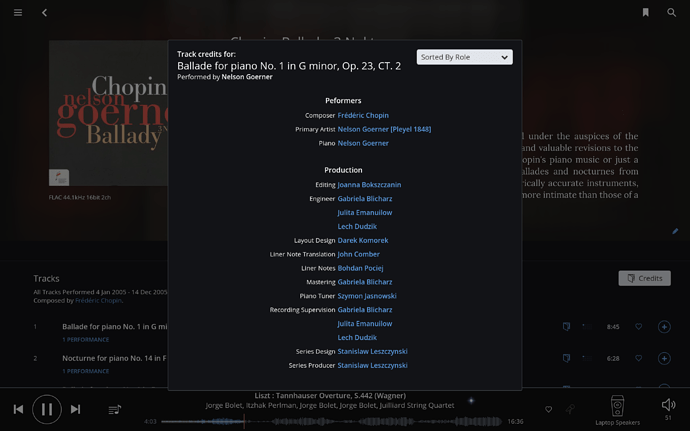 Thanks for your assistance.

Yes, I had tried that, but it usually just brings up the producer & another field.
What I’m after, which I presume a lot of listeners would want, is the artists that are playing on each track, if they are different for each track…otherwise, an artist list for the album if they are the same on every track.

I didn’t think this was relying on metadata to provide this…I thought Roon was collating info from the web. I know I can find this info from the web for most albums if I do it manually, but it’s a huge task. I’ve already started doing this & entering the info in another database program.

Appreciate your input though.

You’re clicking the little booklet icon next to each track right?

it usually just brings up the producer & another field.

It varies quite a bit, and our metadata is always improving (and updating in app automatically), so look for this to get even better. In many albums in my collection, I get full credits, including guest vocalists, musicians, production staff, etc.

If there are cases you think we should be doing better on, definitely let us know!

When Roon has to use my own metadata, then it appears to just list one artist per track, and when the track has multiple artists assigned, Roon just displays the single artist whose (first) name is first alphabetically (even though that artist may not be the first in the list of track artists).

What’s worse, the search function of Roon also appears to be ignoring all track artists that are not listed.

Here’s an example. I have the 18CD collection issued on EMI Classics in 2011 under the title Delius 150th Anniversary Edition. Roon apparently doesn’t have this in its online database. It has a couple of Delius compilations issued in 2011, but neither of them are what I have: 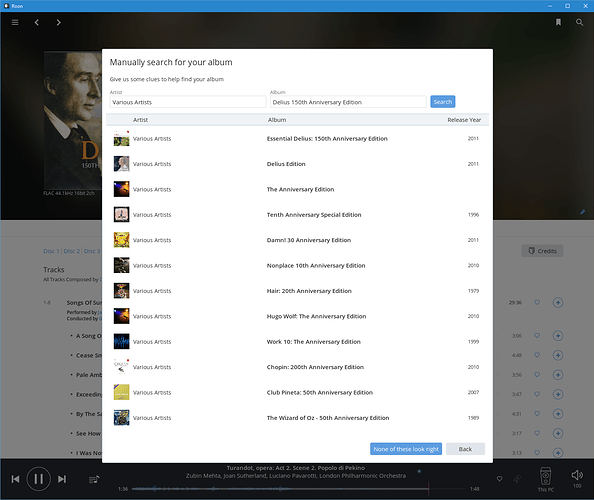 So Roon has used the metadata embedded in the tracks to build up the library entry for all 18 discs.

Now let’s look at the first part of “The Mass of Life”, contained on disc 11. 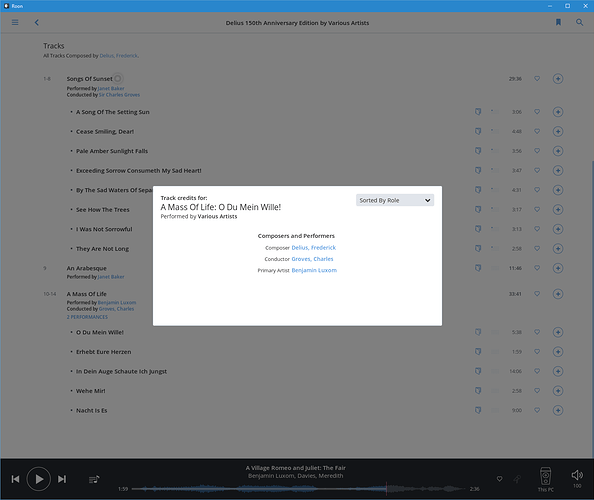 Roon gives Benjamin Luxom as the only track artist listed, and as Primary Artist in the credits. However, the track artist metadata has all the performers listed: 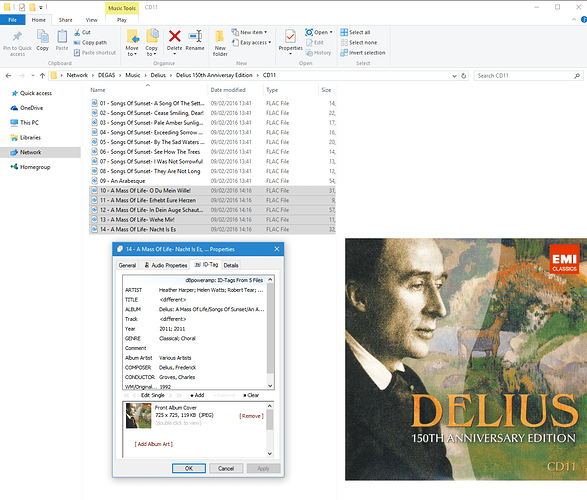 And if I do a Search in Roon for Heather Harper, none of the tracks from The Mass of Life get returned in the results…

I think this could be improved? Thanks.

If that is the case, then how is Roon coming up with “Benjamin Luxom” in the Artist field? The Album Artist field for this disc has the value set as “Various Artists”…

The precise support of file tags is a question for @brian I think.

The 18CD set itself is in Rovi as a placeholder here:


and @jeremiah has the power to ask them to fill out the entry, which they probably will do in time. (Things @jeremiah has reported for me have indeed been fixed. Thanks Jeremiah!)
1 Like
Classical Box Sets that are not identified by Roon