Artwork not showing up in ROON via an iPad

Have a few Roon cant detect, so decided to use google for artwork, copied and placed as a .jpg file direct in my NAS under the relevant music file.

Shown in Roon as “image info” but not on the album itself. Tried to change in Roon metadata preference, but no success.

You can help Roon by naming the file to something recognisable, like cover.jpg or folder.jpg.

You may have to run ‘Re-Scan Album’ from the Album Editor if your NAS does not report the changed file to Roon: 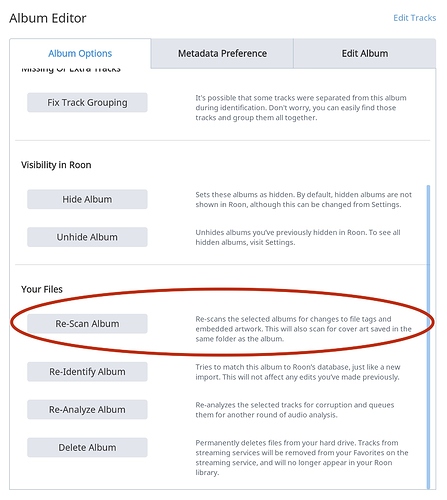 To be sure I understand correct, I saved the picture as name.jpg so it shows up as a track with no number after the songs, fx.

Is that a wrong way to do it?
Would I have to make a separate folder or?

I have allready tried your suggestion (re-scan) with no success.

Anyone with input to this issue?

Tried to move artwork to separate folder named cover.jpg - still doesnt show up after re-scan either.

Hi @Niels_Christensen ---- Thank you for the report and continued feedback, both are very appreciated! Sorry to hear of the troubles.

Moving forward, just to make sure I have your issue in my head correctly. Roon is importing the artwork but it is not displaying it when you navigate to the album in Roon. However, it is showing up when you go to the album editor under the “album artwork” field. Is this correct? Can you please provide screenshots highlighting this behavior you are seeing in the app.

Additionally, if my thinking is correct and I have summarized the issue accurately, if you choose “Roon’s suggestion” in in the “album artwork” field what is the experience like? 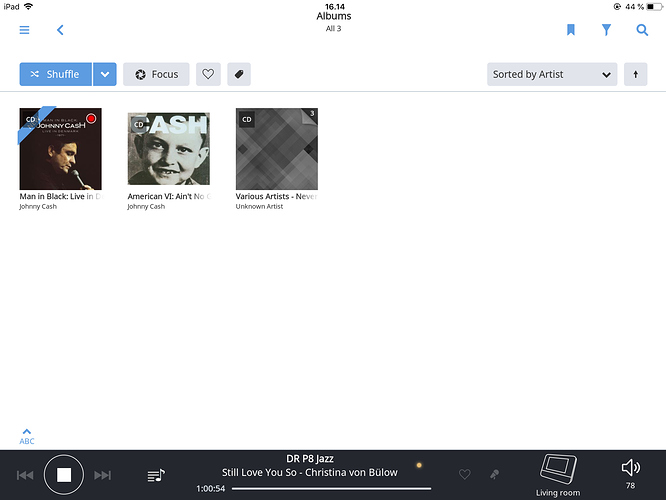 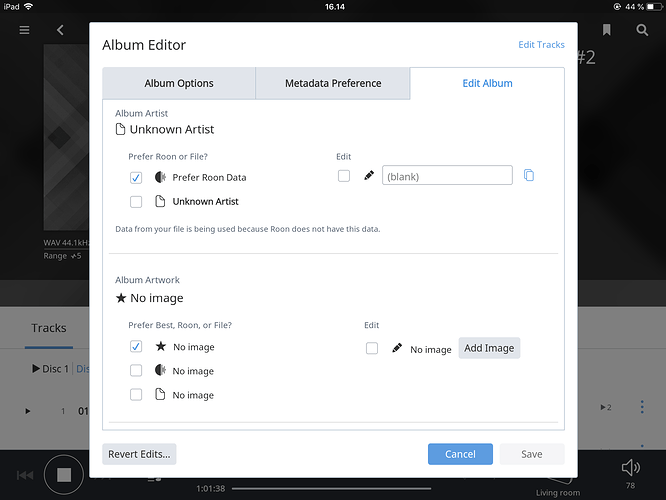 Thanks for the follow up @Niels_Christensen, the screenshots are very appreciated!

I see that album is being listed as “unidentified” in Roon, since noticing this behavior have you tried identifying the album?

Yes, no one match.

Further, I assume I should still be able to add cover manually?

Not sure what is going on with the image files you placed into the album folder, but have you tried to manually add an image via the Album Editor (‘three-vertical-dots’ icon on the album page > Edit…): 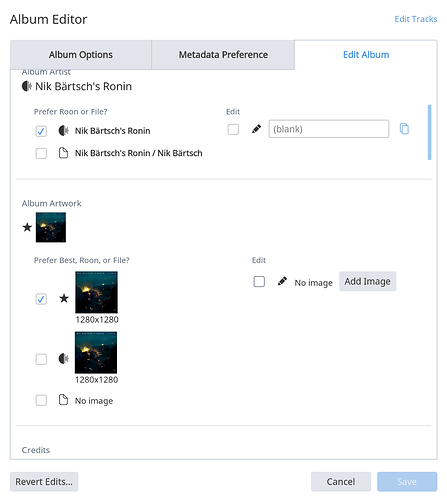 Yes tried to, but ask for URL, dont know how to deal with this. The artworks I have saved in a folder.

Are you editing from a tablet? On a PC or Mac, you should be able to browse to any folder local to the machine you are trying to do the edit from and select the image (or just drag-and-drop it into the ‘Add an image’ box): 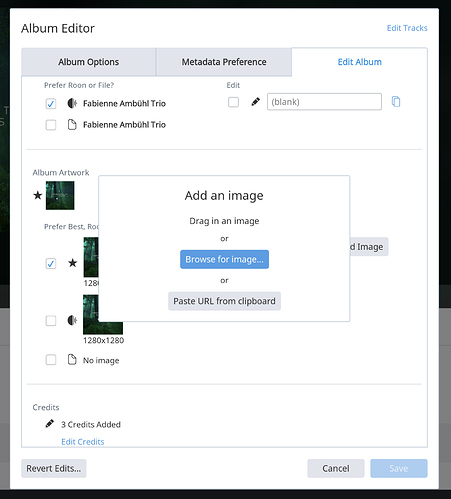 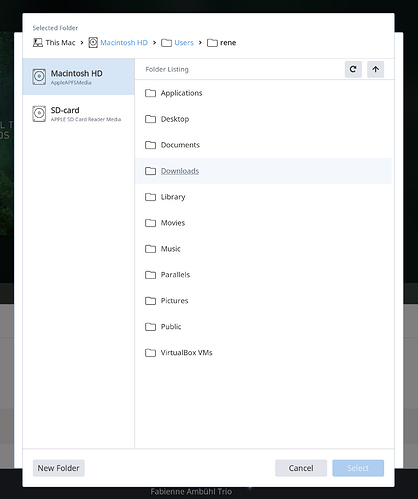 Yes sitting with an Ipad, so not possible I understand now. 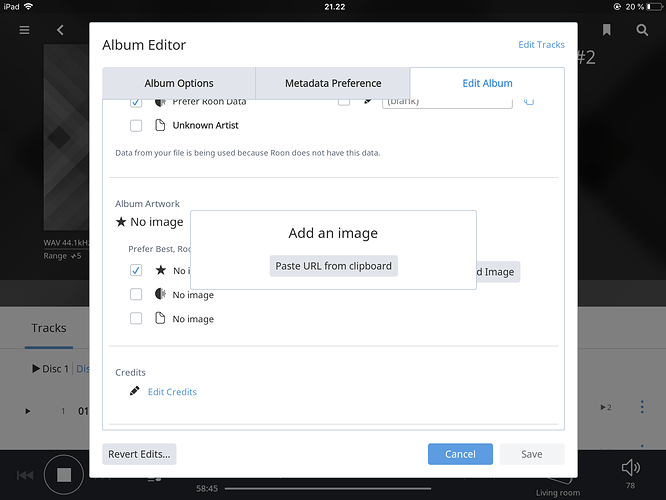 managed to get it solved manual using a computer!

but how to add in future using my nas (Synology) to be sure Roon tracks the artcovers as cover?

Hi @Redwine ----- Thank you for the continued feedback here and my apologies for the delayed response.

Continuing froward, I had a chance to touch base with our tech team about the behavior you are reporting here and what is to be expected when trying to add album artwork via an iPad. Roon will pick up artwork from a the folder that is being watched but if “we” are unsure that it’s not the front cover, we will not pick it.

So the first suggestion the team has made would be to try naming your artwork differently. In your example above you mentioned the following:

I would recommend adjusting this to the following for future imports:

If you still have artwork that is missing you also have the option to navigate to the album details page for any given album and select the “additional artwork” icon:

From there, a window will pop up and show the other artwork that is available for the album. At the top of the screen you will see a an icon that says “image info” if you select it you be given the option to set the image as the “front cover”.

Great news re. your second option, didnt know this function but works fine!

Your first option, the cover.jpg., I need clarified. Do you mean, create a separate folder “after the tracks” named folder.jpg and place cover art in this folder linked to that specific cd?

Hi @Redwine ---- Thank you for touching base with me, glad to hear the “second option” is working as expected.

In regard to the “first option”, there is no need to create an additional folder. You can leave the art work of your choosing along side the tracks in the same directory. What I am suggesting is giving the artwork the name “cover.jpg” so Roon identifies it as the cover art.

I had something similar happen recently. Renaming the file worked for me.