In “The Value of Audiophile Switches” thread I proposed an experiment to see if I could detect any changes in SQ with the addition of an audiophile switch to my system. As this thread has been suspended, I’ve started this new thread for those who expressed interest in my findings. 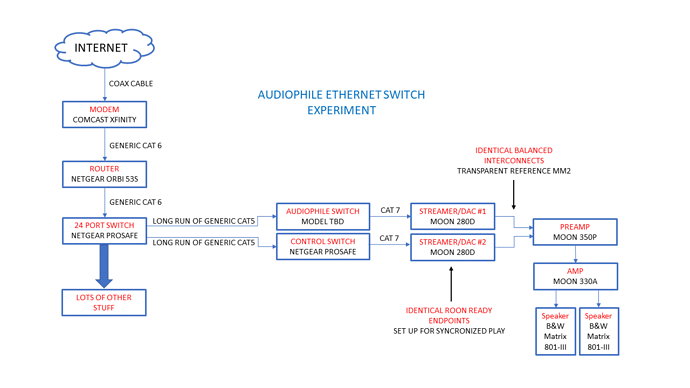 The audiophile switch used was an English Electric 8. This setup allowed me to seamlessly switch back and forth between the two balanced inputs on my preamp while playing identical streams to the two endpoints connected to these inputs. To my surprise, the preamp was able to switch between the inputs without producing any delay, dead-time, or strange noises allowing a quick and accurate comparison between the control and test signal paths.

My wife was in charge of Ethernet cable swapping, which was done while I was out of the room, so that I did not know which switch was inserted into each signal path.

The program material was mostly a mix of jazz, classical, and blues selections I am familiar with and that have good imaging and SQ. Most were local files, some were Qobuz. For fun I included a few 1970’s favorites that don’t, in my opinion, sound so good regardless of the playback chain.
To start, I compared the SQ of the two streamers without either the control or audiophile switches inserted. I felt it was essential to verify that the sound from the two signal paths was indeed indistinguishable from each other. Not surprisingly, I could not detect any difference in SQ between these two signal paths.

Next, I inserted the control switch but left out the audiophile switch to make sure that this $29 switch was not in some way degrading SQ and invalidating the experiment. Again the two signal paths were indistinguishable from each other.

Finally I inserted the audiophile switch into the mix, and did some extensive listening. I had my wife reconfigure which switch was in which signal path a number of times, to remove as much bias from the experiment as was practical. Throughout this testing, I was never able to perceive any differences in tonality, transient reproduction, or soundstaging. Indeed, to me, the streams sounded indistinguishable from each other on all the program material.

If you believe the networking experts, this is hardly unexpected. If you believe happy owners of audiophile switches (including the audio professionals who let me demo this switch and whose opinions I value), my ears and/or system must not be good enough to appreciate the benefits. I’m not interested in debating which is true, I’m merely presenting my results for those who asked to see them. I will, however, be happy to give more detail about the testing if there are any questions.

A few notes on the English Electric 8 switch: This is a very attractive piece of audio kit. The case is handsomely designed, and it feels quite substantial compared to the typical datacom switch. The cables and power go in the back, and there are power and link indicator lights for each port on the front panel. Unlike most switches, the lights are dim and will not overwhelm the listener if the switch is visible in an equipment rack.

49 Likes
Using Jitterbug with Nucleus
Is there any sound quality improvement with the new Roon 1.8? What are the improvements, if any?
Jim_F (Listening To Music) December 22, 2020, 1:16am #2

Your results are what I would have expected. However, how do you know the 24 port switch is not degrading the signal such that the downstream switches don’t matter? I would do the experiment without the 24 port switch.

Its the same switch (albeit a 24 port model instead of a 5 port model) as the “control” switch. The audiophile switches claim to fame is that it will de-crapify dirty ethernet data, so if it does what it claims to do, if would be more obvious if the 24 port switch was degrading the signal.

Exactly as expected! Thanks for reporting the outcome.

It’s also possible you have a very “clean” system and there is no crap to de-crapify. I agree with your conclusion, just pestering it a little. Good job.

EDIT: And yes, the results are totally one person’s subjective judgement.

Not intending to put a damper on the results in way shape or form but this test implies that in your setup such an “audiophile switch option” is of no “on the surface benefit” use to have in play.

Also doesn’t say that someone else might not hear a difference or might hear one favourable or not in your system. I wonder if the supplier of the switch came over and did the same double blind test you did if he/she would hear anything different.

It also doesn’t take away from the discussion that others may find preferable results and some may not.

Bottom line is that there is no right or wrong here. Try and buy what works best for you. It is your system and your ears that are in play here no matter what anyone says is true or not. It is also your money too.

Also doesn’t say that someone else might not hear a difference or might hear one favourable or not in your system.

I hear lots of new things when I change set-ups and components - but that’s because I am actually listening to my system trying to hear new things. Our ears/brains are structured to focus on perceived differences. Whether those differences exist in oustide of my head can only be proven if I can identify the change correctly 12 times out of 16 in a double blind test.

I would like to congratulate @AudioDreamer at going through all of the efftort to do this. The main problem with DBTs is that they are very hard to set up properly, even if one has the correct equipment (which most of us don’t).

However, the one flaw in the experiment is that the OP came from the perspective of switches not making a difference. I don’t think they do either, but the real proof would be getting someone who does believe in them getting 12 right. Maybe invite some proponents over for a Covid-safe session.

Great work, thank you for your effort and for all the information.
Is there any chance to redo the experiment using an UpTone EtherRegen switch?

Aye from my Side…

But, what if the data never passes through a crappy switch?

The Comcast / Xfinity Modem is a crappy switch and no easy way to remove it.

@AudioDreamer Nice test set-up. Thanks for the write-up. One more suggestion… use generic cat5 from switch to streamer. I’m interested if the switch does the same job as the higher quality cat7. If the cat7 provides the same benefit that’s a cheaper option. If you have a chance that is. Thanks

If you don’t hear a difference between a normal cheap but good switch and the Electric S8 then you are a happy person, unfortunately I can hear the difference. On the other hand, the difference becomes very difficult to hear between a Cisco MS220 adapted to linear power supply

I don’t have access to an ether-regen. If anyone wants to loan me one I’d be happy to try the same experiment with it.

Have you tried it on wifi?

Were you trying with just generic listening, or listening to an easily identifiable snippet of sound/instrument? When I make changes, I use Ahmad Jamal’s ‘Jamal’s Blues’ which is just bass and keyboard, and with the keyboard he makes these long, very fast tinkly runs, so I compare that run - does it sound like a piano should sound? Are the keys more or less mushed together sounding? How does the bass and piano separate? And over the long run (i.e. listening for an hour or more) is the music more or less fatiguing? If I was, to say, throw on AC/DC I might not get as good a perception of immediate changes to the sound as say solo keyboard, violin, etc, but over a longer run may be able to listen AC/DC longer without getting tired. Just things to think about.

It was a pretty detailed listening session. Actually 3 sessions of a couple of hours each.

Much of the jazz was sparse instrumentation which allowed me to concentrate on individual instruments. Things like piano transients, acoustic bass plucking, etc. as well as some live music that has a fair amount of “air and atmosphere”.

The poorly recorded stuff I threw in still sounded just as lousy. (i.e. a hideous remaster of my favorite Uriah Heep album)

In the past when I’ve made changes to this system, I could easily identify the changes. It is often not clear if the change is beneficial, but the changes have been noticeable. Things like different interconnects, SPDIF retiming devices, and even different SPDIF cables have produced noticeable changes. This time I really could not detect any difference at all

Yes @AndyR and it was positively atmospheric!

Yes might be interesting if wifi makes any difference but typically the higher end Network streamers dont have wifi…must be some reason for that perhaps.

The only reason they might not, is it’s so temperamental to get working reliably. Every environment is different.

Auralic has wifi and they recommend it if you have good signal as it it achieves true physical network isolation.

Thank you for taking so much time & trouble to evenhandedly illuminate a hot topic. You’ve probably saved many people significant cash.

Too late for me, but I’m happy with the ER…

Thanks Michael! I use commercial grade switches and router not for improved SQ, but reliability as I often use multiple endpoints in a group and that’s a lot of data/work back and forth.