Early last year I owned an Aurender N100H and was very happy with the results.
Then I tried Roon and just loved the interface and the multi room ability which I use a lot.
Was quite upset to discover that Aurender and Roon did not play ball with each other.
And it appears that is not going to be fixed anytime soon from what I am reading.

Aurender “claims” that to accommodate Roon they would have to increase the size/power of their CPU and that would reduce the SQ.

So I wonder to myself… has anybody at Aurender actually PROVEN this situation to be fact or are they just using this as an excuse to not work with Roon?

I mean how difficult would it be for Aurender to build a prototype with a larger CPU and actually test this theory they state, you know with measurements and critical listening tests.
Anyone know if Aurender has actually backed up their claims with proven facts?

Not really sure why you would want to do that. As I see it Aurender is just a very expensive computer with a so-so app user interface and you get the same sq using a Nuc/ROCK streaming to a high quality endpoint. I used an S10 for 3-4 years before moving to Roon and have never missed the Aurender.

Not saying I miss the Aurender at all.
Questioning their stated reasons for not playing nicely with Roon.
That is what I am curious about.

I’m skeptical. I owned an X100S, to me Roon with a cheap raspberry pi endpoint sounded significantly better, everything else being equal. This realisation made me sell it. IMO, the “low power cpu sounds better” argument is in the same ball park as million dollar cables.

I used to have an Aurender N100H. Neither the sound nor the Conductor app were up to the hefty 3K Euros I had to pay for an admittedly nice housing. Far too expensive, and a totally isolated product. Any Roon/Raspi combination easily wins over the N100H. Not to speak about Aurender‘s higher tier machines, outrageously expensive!

You mean you dont own any million dollar cables…

Not sure as my audio memory is a good as I would like it to be but it says the N100 I had sounded pretty darn good and I really did not think the Conductor app was that bad.
Ok on Android phones it was but on my iPad it looked and worked just fine.

One thing I can attest to in Aurender favour though is their customer service which was first rate and very prompt.

A shame Roon and Aurender cannot play nicely together .

This is expensive. Normally to prototype there are multiple iterations of putting together on a bench before a final circuit board layout is decided on. Then you have to have chassis, power supply, software, etc. all completed in a mostly final form to really hear how it sounds. There are philosophies at every company about what makes a difference. I assume Aurender believe that bare minimum clock speeds (I was just talking to someone about underclocking my Rasp Pis for this reason) is part of best sound quality to them. If that’s the case then the cost + proving that philosophy false is a big undertaking. It’s never as simple as just throw-in a faster CPU (even if one is available once there may not be. I have no idea what CPU sits in that device).

There are plenty of other companies that have figured this out and get glowing reviews. If an A/B comparison still shows that the Aurender sounds better than… you know… maybe they are right.

Personally, I like the sound of the Aurender music server better. Roon is good, and has better metadata delivery, but for sound reproduction I prefer my A10. Aurender can also be cast from Roon.

Robert
As I said my memory says the N100 sounded really nice and I thought the Conductor app was pretty good tbh.
However I am curious as to how you get your A10 to “cast” from Roon?

I seem to remember it showing up on the iPad and being able to play if I had the iPad hard connected via a lightning to usb cable into my dac but I found that inconvenient to say the least. 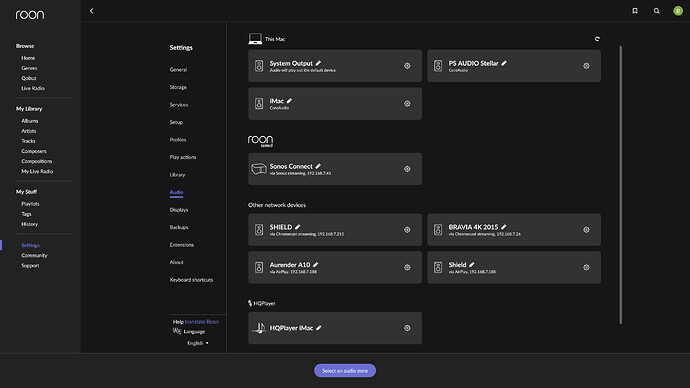 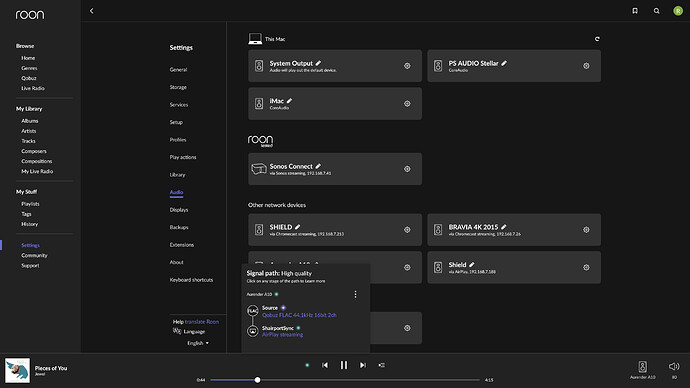 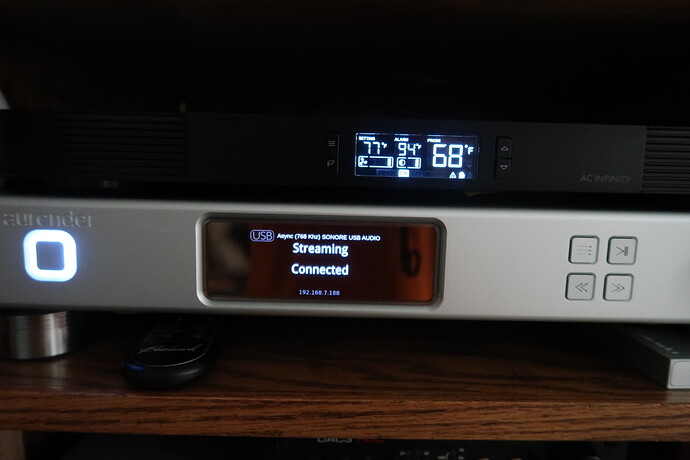 Nothing I did per se. It just shows up Settings>Audio and needed to be activated. Works in an Airplay mode. Sound quality is good. It is selectable from the Conductor app. 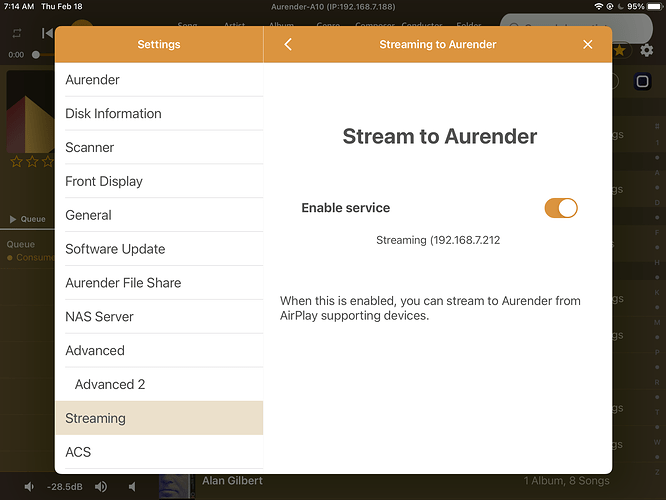 Well, now we know why you prefer the sound of the A10, Roon is “casting” to it via Airplay

Interesting Robert, it sort of looks vaguely familiar to what I remember but I had no way to wireless stream , i think that was my holdup.
I do vaguely remember it working with the aforementioned lightning to usb cable direct into the dac but it has been a while so not 100% sure what/how I did it at the time now.

Still would have liked Roon and Aurender to play ball together though, would make things a lot easier but I guess it is not meant to be.

Airplay is not in the comparision discussion. You are making an assumption. I was merely answering a question for Kevin. In my system, Bryston MPD outperforms Roon RAAT on the Bryston BDP-2. The Bryston is a good quality ($3K transport). The Aurender is better yet than Bryston MPD.

Aurender doesn’t choose to use Roon RAAT since they believe it requires additional computing resources. Aurender thinks they offer a better mouse trap per se. Soundwise I agree. That’s their stated explanation. Roon is a fantastic program. I do use it, but not exclusively.

You are making an assumption.

Robert
I am also thinking of buying the A10 and if I do I hope you would not mind if I needed to pick your brains if I have any questions on usage or setup.
Should be straight forward though from my prior Aurender experience.
Load all my files to its internal 4tb hard drive, sign onto Qobuz and let her rip!
For multi room if I did not renew Roon I would go back to Bubble upNp which easily sees and works well with my three Chromecast Audio pucks in the various rooms around the house.
Only downside to that software is that it is Android phone only atm.

Sure thing. It’s new to me as well, but pretty straightforward. I am using it to feed a tubed headphone amp and preamp via analog, and it feeds a DAC via USB (i2s).

I got a good deal on the A10 from Music Direct. I was looking at the non-DAC version N100SC before this one came up. I control it via ipad.

That model has the drive storage port in the rear panel for easy replacement. Feel free to PM me any questions you might have…