I am running Roon 1.3 build 259 on a MacMini which is running the latest non-Beta version of macOS Sierra. The MacMini is a late 2014 2.8ghz w. 8gb mem. Music is all stored on a QNAP TS-251 NAS unit (pair of WD 4TB red drives). About 41k tracks on the library. The network is all wired, except for Roon app on an iPad. The MacMini, QNAP, and a dCS Network Bridge are all wired into a Cisco 8-port smart switch. Additionally an Eero mesh access point is wired into the switch principally to support the iPad WiFi access to Roon.

In the past when ripping CD’s that have HDCD encoding I’ve not seen issues with playback into my Berkeley Reference 2 DAC. When a music file having the code plays, the associated HDCD LED comes on. Recently I ripped a Reference Recording entitled Copland 100 that has HDCD encoding. I confirmed the same with the company, just to be sure they’d not had any other complaints. I also loaded it into an Oppo BDP-80 and confirmed that it saw the HDCD flags or whatever is embedded. I then used numerous software apps to rip the disc including JRiver (on a Mac), EAC and dbPowerAmp on a Windows system and even XLD on a Mac. I only once got a rip to display the LED and that was using dbPowerAmp with DSP HDCD and 6+ Amplification. However, not only does dbPowerAmp upsample badly to 24bit but the added boost creates noise distortion.

To isolate this all to Roon, I took the EAC copied files which are 44.1k and 16bit and copied them to a FAT32 thumb drive. I plugged that directly into the dCS NB and used the dCS application to play directly into the DAC. HDCD LED came on and the music played without any issue (sounded awesome). So, I then went and plugged the same thumbdrive directly into the MacMini and had Roon scan and play it. But in this instance something is not right – the downstream LED does not light up. The only thing between the MacMini and the dCS NB is the Cisco smart switch. I know of nothing that would suggest it is the culprit.

If no HDCD source in my library would light up the LED on the DAC that would suggest a more general problem. And I do note that on some music collection, HDCD was only embedded on some of the songs. And that does show up with a lit LED.

I can confirm that all other Reference Recordings CD’s labeled as HDCD that I’ve ripped do light up the HDCD LED on my DAC.

Please let me know what else you might need from me regarding my hardware or software setup that might help uncover what is happening.

Forgot to tag as @support . In any case I apply absolutely no DSP processing either within Roon for any zone, or thereafter. I rip everything as AIF or, in this case, WAV.

Upload a snapshot of your signal path while playing the affected HDCD rip.

I deleted your other thread and moved this one to the Support category.

How’s that done from iPad? 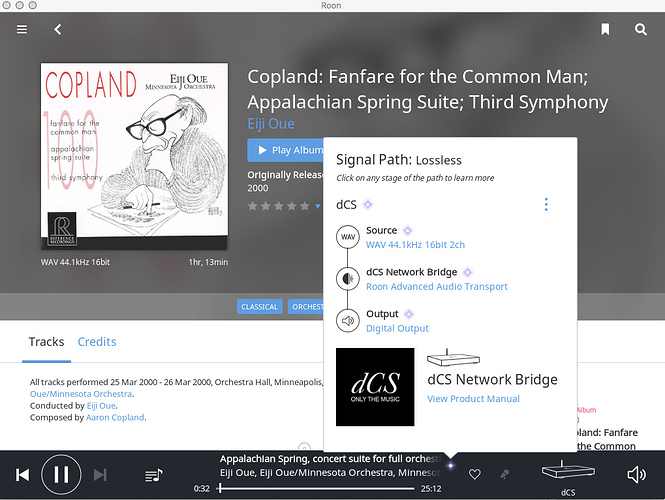 Hope this works…almost impossible to do on an iPad. Far easier with macOS.

That gets it into camera roll. Then the question is how to access it in a way that you can drag and drop it onto a web page like Roonlab’s community support pages. Guess that’s one reason, among hundreds, that IOS is not really ready for prime time – certainly not user friendly.

Click/Touch the upload button when composing a message.

Will need to experiment with that (didn’t see it as viable). I can tell that it doesn’t support .tiff images (which is the one that the macOS offers for saving via the Grab utility.

Yes. Will need to see if it can “find” the screen roll file from Photos or if I need to somehow move the photo into yet another app. 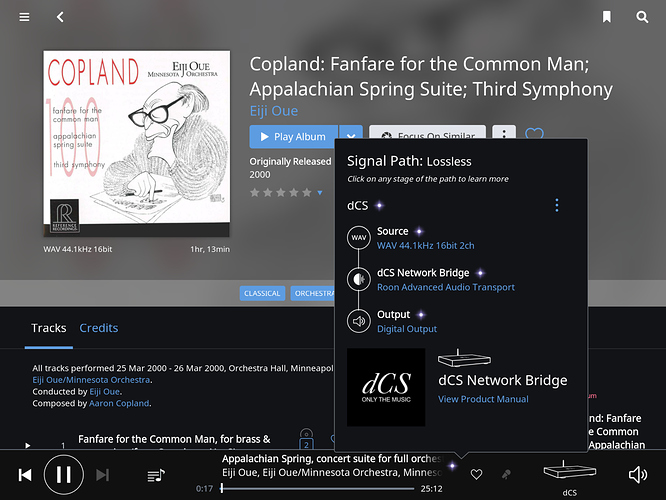 Hmmm…once I gave the app permission it allowed it. Thanks for the guidance. Not sure the image suggests if anything is amiss.

Will need to experiment with that (didn’t see it as viable). I can tell that it doesn’t support .tiff images (which is the one that the macOS offers for saving via the Grab utility.

macOS has a build in capture utility that works in jpg. command+shift+4

You don’t have to move the photo anywhere on iOS, the upload button on this site opens iOS’s option to access your camera roll.

As long as the screen grab is in your photo library, you’ll be able to do it.

You’re using a dCS Bridge. Isn’t that a unit capable of DSP (upsampling etc)? Surely you should check carefully the Bridge’s settings.

Thanks. Seems with Sierra that command saves it to the desktop as a .png rather than .jpg
But at least that works well for this site. Grab app in Utilities is a bit more capable. But at least the your approach is fast and works.

Is this a single test case? Or have you attempted to play via Roon any other HDCD rips?