Just as one of many, many examples have a look at this:

Composition: 24 Preludes for piano Op. 28 by Chopin. I get a few pianists lsited as “Top Performers”. They are totally “at random”. No idea who considered those as “Top performers”.

I also get a trumpet player !!! Now thats great. Never heard these preludes being performed on a trumpet. Do you need more examples? Could you pls fix this or just put this “feature” on hold until it really works. Many Thanks. 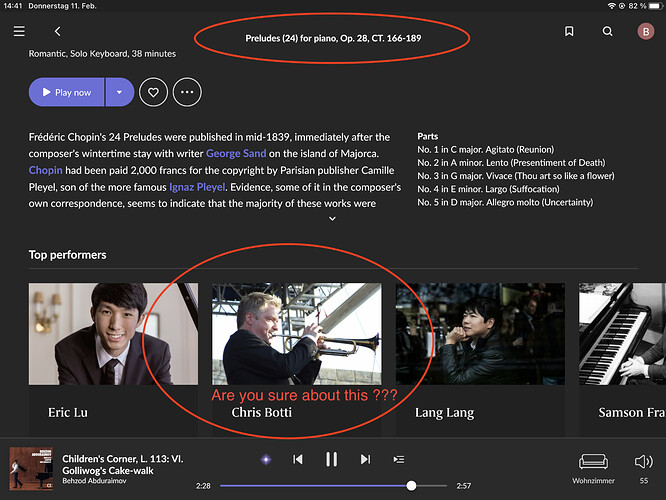 Interesting, I found this on Wikipedia

Jazz trumpeter Chris Botti includes a version of Prelude No. 20 as the album’s first track. Seems like the algorithm might be off to filter that to a top performer, but neat from a data/discoverability standpoint

The algorithm is completely off

And Roon claimed in their 1.8 marketing emails that Valence:

“Next, it considers your listening history before filtering for the results that are most popular, but only among listeners who are experts in that genre.”

For example, under the listing for the Discography of the composer Franz Schubert I get the following if sorted by popularity. What determines this? Qobuz streaming, downloads, Roon owner’s libraries/plays? And it seems that the same determination carries forward if I select the option to show albums from my library alone. That same Lang Lang album (I have it in my library) shows up first - even though I don’t think I’ve played it more than once. While other Schubert compositions that I’ve pl…

I think the tangential connections are neat, but it’s hard to imagine that being a top performer.

It seems that there are a lot of “easy listening” and “top 50” compilations and crossover albums that get listened to a lot. And that’s driving the results.

For Mozart’s Marriage of Figaro: The 2nd performer listed as Top Performer - plays the fortepiano on 5 tracks in one performance of the opera in the entire Qobuz catalog.

And the top conductor is Teodor Curentzis !!

Yep, and thats the reason why this whole Valance crap will never work until someone actially filters all the Spam albums cluttering the search results for compositions. I said so after 1.7. They dont listen.

As that is unrealistic, Roon should just turn off that nonsense allrogether and focus on more important things.

Just as one of many, many examples

With all due respect - but believing that for the money we pay for Roon they can implement effective artificial intelligence is a bit naive ?

With all due respect - but believing that for the money we pay for Roon they can implement effective artificial intelligence is a bit naive ?

Well, if they cant they should just leave it alone. We would all benefit from their resources being spent on getting functioning functionalities

And the top conductor is Teodor Curentzis !!

at least it got this one right

Those artists that appear on the most „Mozart for Babies“ albums are „Top Performers“ and „Most Popular“, at least according to Valence.

I found the source Valence uses!

I am 74 years old and I claim to have some knowledge of so-called classical music. By subscribing to ROON for life, I unknowingly gave up my free will to commercial algorithmic decisions for the greater number . I pity the youth that will follow me.

Just bumping this for more visibility…

Yes, just to remind Roon that absolutely nothing has neen done to get back to some normal situation here in 778.

And I still get Lyricists and Librettists wrongly classified by Roon as „Composers“ for which I have now opened a separate support ticket,.

Maybe about time to get at least the basics right??

it is now almost two months ago that I reported the problem of meaningless “Top Performers” being picked by Roon’s “Intelligence” system.

Nothing has changed here since. @dylan, Could I kindly ask to have an update as to where this issue stands? The example listed above is just a case-in-point for a huge list of similar nonsense. If you need more , please let me know.

As other users have said, the simplest solution would be to just have a kill switch for this and similar kind of well-meaning “suggestions”.

We appreciate the feedback here, everyone! I just wanted to confirm that this is being tracked and all of the examples provided have been extremely helpful. Thanks!