Yes, I have a HiFi Plus subscription with TIDAL.

I will get a list of more tracks later, but any track on Tracy Chapman’s eponymous debut album should show the issue.

TL;DR: It may be down to an ISP issue or Thunderbolt bus problem or Roon’s connection to TIDAL.

EDIT: Here’s what I consider “normal” or “expected” playback of TIDAL MQA files in Roon on my DAC: 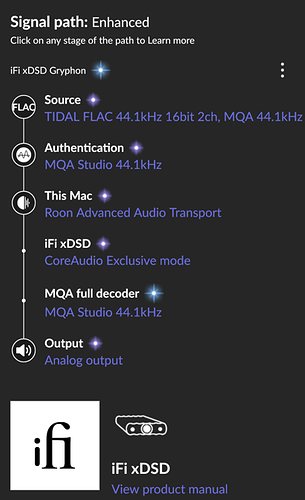 With a HiFi Plus subscription and quality set to Master, I expect 24-bit delivery, not 16-bit, for most Tidal Masters, but I can be wrong. 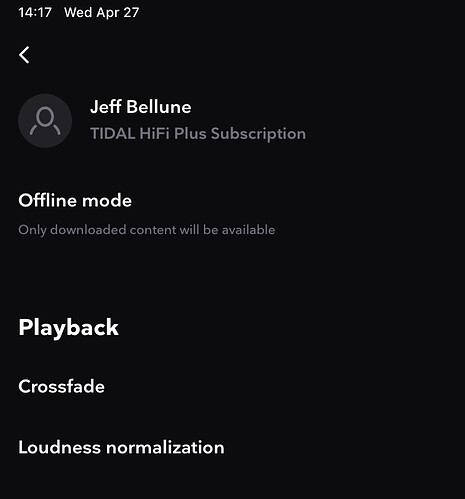 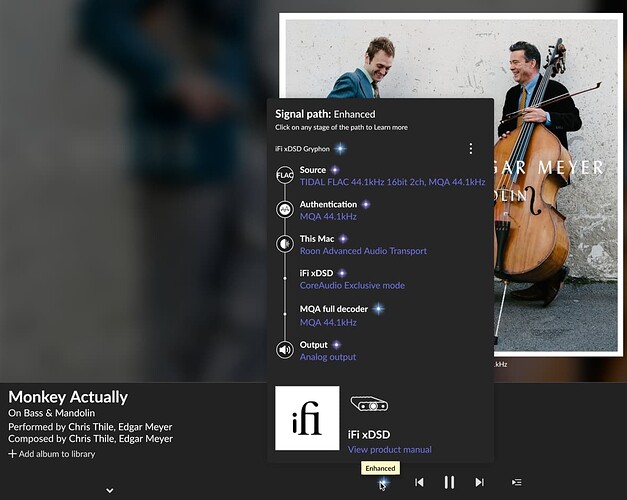 In your configuration Roon isn’t doing any MQA processing at all, its just passing the stream directly to your DAC. The signal path information relating to MQA decoding and rendering is actually provided to Roon by the DAC in this case. For some reason your DAC is getting confused and losing its MQA authentication lock on the datastream. Given that this only appears to happen with 44.1kHz tracks I’m willing to bet that there’s some sort of intermittent glitch in your DAC’s firmware or it’s having some kind of issue with the USB-C connection to your computer.

You might want to try changing the “MQA Capabilities” of your DAC in Roon’s audio device settings to “Renderer only”. This will force Roon to perform the authentication and initial decoding of the stream. If that works without issue then the problem is likely in your DAC’s firmware.

Thank you for that info. I’ll experiment. Given my experience this morning, the USB-C connection is a definite suspect.

Question: If the DAC’s firmware is the issue, would you expect the firmware to have the same problem when it is the audio output device for the TIDAL app using this configuration?: 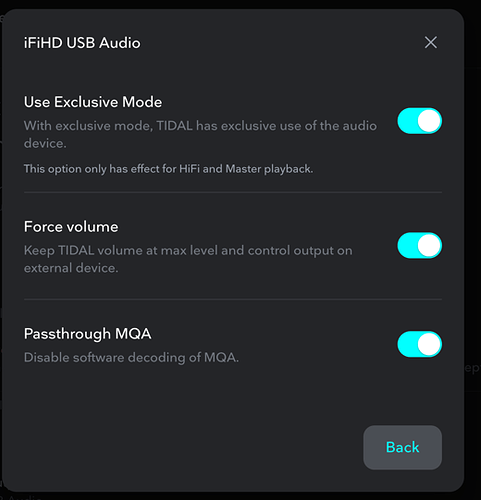 In theory they should be the same… In practice I’ve seen issues time and time again where Tidal’s content delivery network behaves differently for their own app than 3rd-party interfaces (like Roon). In essence their app connects to one node to get files and Roon is directed to a different one. In some cases the data on that node isn’t complete and they’ll make substitutions. It’s nothing nefarious, just the luck of the draw.

Thanks. I’ll post back after I try the “Renderer only” thing.

TIDAL MQA 44.1 tracks that are not in my Roon library or favorited in TIDAL will switch from an Enhanced signal path to a Lossless signal path and back again several times during playback of that track in Roon.

My DAC’s display will change from MQA to PCM when these switches occur.

Given that this only appears to happen with 44.1kHz tracks I’m willing to bet that there’s some sort of intermittent glitch in your DAC’s firmware or it’s having some kind of issue with the USB-C connection to your computer.

@Jeff_Bellune Experiment with turning off integer mode. Some DAC do not like it.

Experiment with turning off integer mode. Some DAC do not like it.

Thanks! I’ll add that to my testing routine to see if it makes any difference.

I always wondered what that option was for. What does it do exactly as it’s only on Mac’s.

The help files say that it’s required for bit perfect 32-bit playback on Mac’s CoreAudio. It has no effect on 24-bit or less playback. It’s supposed to be benign, so unless there’s a problem it can be safely turned on.

All my TIDAL MQA tracks are 16- or 24-bit so should not be an issue. But I’m going to turn it off to see if it makes a difference.

So I guess of use only is using Roons DSP engine then and the DAC supports 32 bit.

It’s supposed to be benign, so unless there’s a problem it can be safely turned on.

I think we’re discussing a problem.

Some of you may recall that I had reported music interruptions/hard crashes/random restarts when using portable DACs with my Macs, regardless of whether they were being used as core or endpoints. This could be seen in Console information, where several errors linked to various Core Audio processes would be listed right before the crash/random restart occurred. After doing a bit of troubleshooting myself, I have finally found the culprit, and hope this information may be useful to others facing …

My Zoorloo Ztella MQA DAC didn’t see MQA and complete its rendering until I deselected the default ‘Enable Integer Mode’ in Advanced Settings. If you want MQA Rendering to work correctly with Roon on macOS, make sure integer mode is turned off. It sounds great now.

This is what your DAC manufacturer says:

Given that, I think I’ll leave it off on my Mac running Monterey.

@AMP Maybe the new default for this setting should be “Off”?

So what’s the result of your testing with it off?

Several projects going this weekend. Not had a chance to properly test yet.

NB: I’ve applied 2(!) firmware updates to my DAC. If firmware was the initial problem, then Roon settings may be superfluous.

Will report back when I’ve done a proper test.

Update:
After firmware, Roon and likely some TIDAL updates, I can’t repro the problem any more. So for now, it’s solved. Hopefully we won’t see it ever again.