Sorry but James Say something and Mojave 3’ keep it all Hid are about as sonically similar as a bee and a dog, Plex seems to think otherwise. Looking at what it throws up I am failing to see the excitement here . It’s lot more eclectic mix of that’s what you want but it’s going more off piste from my starting point than Roon radio ever does. I also don’t want to listen to songs that are all the same pace which this seems to be what it’s doing track wise anyway.

. Going to be waiting a while

You need to ditch that NAS as server. Use it as NAS and use a real computer.

I have lot’s of real computers

(too many really). I am just using them all for other things.

The Synology Nas is plenty of powerful enough for most of what I ask for it (basically Plex movies, TV and music) and has no issues with anything else. It’s just this process doesn’t seem very optimised and I might only use it once or twice

I do actually have a Nuc 7th Gen i5 that I installed Ubuntu and Plex on, but that is now set up with HQPLAYER embedded for me to test to the iFi Stream.

I used to run mine on my QNAP but it choked for transcoding, esoecially 4k or HDR which I used away from home and family use it in other households. So swapped to Ubuntu and an i3 NuC now it’s so.much quicker to navigate and transcoding even HDR transcoding is done via the GPU without getting bothered at all.

That’s probably where I will end up once I have finished playing with the latest setup.

Trying not to run a data center in my study though

Mines in the cupboard under the stairs. Now I have the USW16 and CloudKey feels less like a home network when I look in there, Need some nice cable tidying though.

Get yourself some good whisky and get Graeme round for some work. Looks like his specialist subject

Honestly, I own a license for an older version, but I haven’t used the program in years and I don’t recall when I originally bought it. I’m a Roon Lifetime subscriber, so I do most of my listening via Roon or Spotify.

Only about 1 week and some time to to go 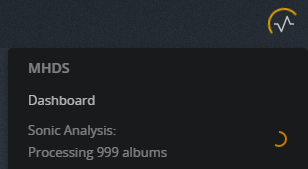 Not bothered with it since my responses here. Most likely won’t use it as I just don’t like it as an interface and it doesn’t interact with any of my hifi properly.

I understand, but I have been away for 3 days and was thinking it might be closer to completion, it analyses dog slow.
Its a quad core machine with 8GB of RAM.

I think you may like what it throws up. The mixes are fine if you like what it does but I don’t find them any better than standard Roon radio a few more curve balls , but I am not interested in hearing music all the same pace and rhythm which is what it seemed to be for me.

I already have Tidal for that (or YouTube and Spotify) so it is more out of interest for when I am in work and traveling. Maybe my memory of using Pandora in it’s early years has worn with age, but that used to give me great results. Maybe I am expect too much, but those songs rarely had the same pace, especially if I seeded it with 3 or 4 songs to kick it off.
Maybe that is the difference

As a present day DJ and have been for 21 years and holder of lifetime subs to both Plex and Roon I can tell you that Roon presents the quality of audio in a magnificent way. PlexAmp has been offering increasing quality and more bells & whistlers than Roon (for my tastes anyway).

While the “sonically similar” feature is good, i was way more excited by the smooth transitions between tracks, which were not based on a fixed crossfading number of seconds, but clearly based on their algorithm and all the related things (bpm, silence, sound color, fading ends and beginnings…)

It was not always on spot, and still perfectible, but i found this feature pretty unique. (but maybe it exists somewhere else ?)
I thought i would find the same here on Roon.

But no way for me to move on Plex, that’s the only thing appealing for me in their app.

I put this in as a separate feature request, but for those who like the way Plexamp “radio” works (which is different than the underlying analysis), I thought this might be interesting. I agree the data model is great, but the interface is what got me excited - even if Roon doesn’t do any more analysis than what it already has. Would be interested in your thoughts (and votes, if you agree!)

Having spent the last couple days playing with Plexamp and deciding that I like Roon very much, I did come away with one feature that I think is pretty remarkable. While you’re playing a track or album in Plexamp and you view the queue, you can click on Related, and there are two sections “Related Tracks” (ones that are presumably more closely related / in your library) and “Outside your comfort zone” (one’s that are presumably more distantly related and/or not in your library). Each of these …

Just spent some time with it, expecting it to be a dream-come-true discovery method in combo with Tidal… only to be sorely disappointed.

Unless I misunderstood the feature completely, it seems useful mainly to those who:

… I unfortunately do not fall into any of the above categories. But maybe I am still missing something important here? Many people seem hyping the Sonic feature…

So the one time I thought it was amazing was when I used it with my source set to Tidal instead of my own library. Then it was amazing. On my library it’s decidedly so-so.

Johnny I think that when you set the source to Tidal it is using a different radio type as Sonic analysis only runs on local files.
I had great success with PlexAmp radio based on my library after Sonic analysis, but for now I am focusing on ARC for remote use.