Hi guys, I’ve started streaming live radio via Roon but find I can only select MP3 and AAC 128.

I’ve moved your post to #support so it gets some attention. In the meantime it would be really helpful if you provided some details of your setup, including core, messages you may be seeing, your geographic location and the stations causing issue.

Mac being used as my core machine.
I live in South East London UK.
I’m using IQaudio Pi DAC as my end point.

BBC 6 music is the station I am trying to listen too.

Can you share a screenshot of the stream you’re trying to play? 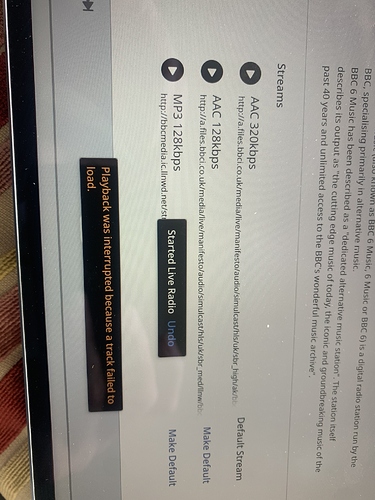 Okay, I’ve checked the stream from Leicester and it plays fine. Is your Mac connected via Ethernet or WiFi? Also, how is the Pi-DAC connected to your network? What happens if you play the live radio stream through the Mac’s speakers?

My Mac and Pi are both connected via Ethernet.

I also get the same error when I try and play using my system speakers or iPad speakers.

It’s a weird one.

Every other radio station that streams at AAC 320 works fine. So it’s just BBC 6 music for me that’s has the fault.

I’ve checked the encoding used. The BBC streams are different from others that Roon handles so are a special case.
However for BBC 6 the codecs for 320 and 128 are identical (mp4a.40.2), so no help there.

Do you have problems with the other high quality BBC radio streams? What about Radio 3’s AAC 320 stream? That uses same codec.

Were you able to test Radio 3 as Brian suggested above? Do you see the same issue with that stream?

Sorry for the late reply guys, I didnt notice someone had responded.

Yes the same for BBC 3 it seems.

Hello again @Chris_Nice.
Let’s remove Roon from the equation. If you paste
http://a.files.bbci.co.uk/media/live/manifesto/audio/simulcast/hls/uk/sbr_high/ak/bbc_radio_three.m3u8
into your browser (or just click on it here), does it play?
I wonder if the Mac’s codecs are missing something.

No, it just downloads as an m3u8 file which wont open on any native apps.

So you could be right, this is the problem.

Ill look into it now,

Do you have a mobile or tablet to try?

If I click the link on my ipad it plays without an issue.

But as my Roon core in on my Mac, Im unable to play and steam from Roon.

I do only have High Sierra on my Mac as Im unable to upgrade to later OSX due to my current Graphics card not being supported, so maybe thats it.

I would have thought that was modern enough, and I haven’t heard of other Mac users with this problem. I suspect a faulty or missing codec but I’m not a Mac man so I have no idea how to update codecs. @dylan will.

No worries; it’s not easy to update codecs on a mac if at all,

Thanks for your help though

The m3u8 file is simply a text file playlist, so this could be an association problem. Also, these files only work over “http” so local files won’t work.

Try downloading VLC and see if that helps. Alternatively use Get Info to see if there is a valid file extension.