After running latest update Roon Remote apps cannot locate Roon Core. Yet Roon Core seems to be connected to network. I have tried rebooting Core several times and reinstalling Roon app on my Mac Mini. I get the same result regardless of whether I am trying to control Roon from my Mac, my iPad, or my Android phone. 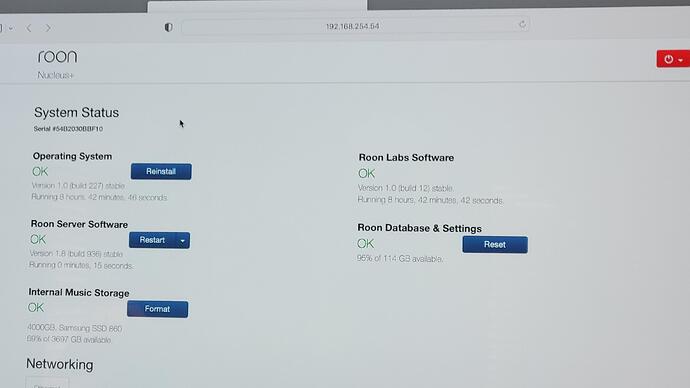 I don’t see your router mentioned. Have you tried power cycling your router?

On your Web UI ii shows the server with a short uptime. Watch that time, does it seem like the server is stuck restarting?

You seem to be having the same issue I do with my ROCK. Your Roon Server Software shows up for 15 seconds. I have the same where it is never up for more than 17 seconds, it continually reboots without ever becoming usable. As per Mike_LC’s question, yes I rebooted every item on my network.

Yes. Even after cycling it, the problem persists.

I think you are right. It appears to be continually trying to restart.

I also have the same issue & have emailed Roon Labs twice but haven’t gotten a response. So frustrating because that they don’t have a phone number to call for technical support

If you are having an issue with the RoonServer restarting, here is a potential solution from another thread. Note, that it is going to reset the database, so it is important to have a backup as the first step indicates.

I have copy/pasted the relevant information as well.

Music talk aside, let’s have you try these steps to clear the server restarting behavior:

I also found these steps from another post and succeeded in getting my system going again. Only thing is that at the end when I tried to connect it came up with the logon screen and told me I was already logged in. I clicked the Unauthorize button that was below and I was in to my system again.

This process worked for me. Unfortunately, I did not have a good backup in place, so I’ll be starting over on playlists. I’ll be paying more attention to that in the future.