@support can’t login in Tidal account again… what again could be wrong?

Hey @Philip_Yalovega — Thank you for your report!

Sorry to hear you’re having trouble logging in to TIDAL. In order to resolve this, please try the following steps:

Hi @support! Yes, it is working for some reason now - it didn’t work yesterday, I didn’t do anything since then, but now it works… Although kind of slow - sometimes it takes a minute to load the song… And album and playlist artworks don’t load at all… 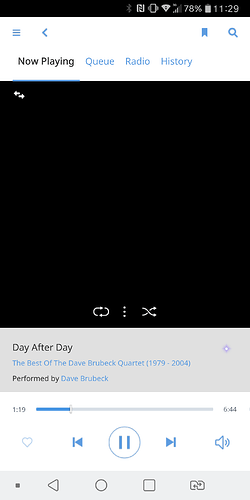 What could be a reason to all of this?

Thanks for the update, @Philip_Yalovega!

It’s possible there could be networking difficulties that are contributing to this behavior. So I can get a better idea of what may be happening here, may I kindly ask that you please provide a brief description of your current setup using this link as a guide.

Can you also please confirm the following:

what version of Roon you are running: 1.5 (build 323) stable (32 bit)
What operating system you are running: OSX 10.11.6
Basic information about the device you’re using: iMac
Streaming DAC: PS Audio Junior DirectStream Junior DAC
Describe where your music is stored – no stored music

Yes, it happens only to Tidal content.
Yes, I did many times reboot core, remote, router, etc.
Firewall is on on iMac

The Tidal service is running sometimes extremely slow, although the internet speed is over 100mbit/sec. Also albums and playlist artwork doesn’t load at all on any remote device.

Thank you for the info, @Philip_Yalovega!

To get a better picture of what’s happening, please confirm the following:

Without firewall I don’t notice any improvement.

It is still the same if I play directly to system from the core. Note, that artworks don’t load on the core as well as on the mobile devices.

Thanks for the network setup details, @Philip_Yalovega.

Upon reviewing your current setup, along with the description of the difficulties you’re having, it sounds like the problem may be rooting from your current networking setup. I also think it is important to note that we have seen numerous issues with the Apple networking hardware products in the past. There is a very in depth post about how you can potentially get into “trouble” with certain configurations.

Moving forward, I’d like to propose a test that should give us a little more insight into the behavior you’re seeing.

Connect the Core machine and the DAC directly to the main router via an Ethernet connection and try to stream TIDAL from there. Is the experience improved?

Hi, tried as you said, no improvement… ((( At first it didn’t login into Tidal, after few minutes it did, but it was again slow and no artworks…

Thank you for giving that a try, @Philip_Yalovega.

Just to confirm, TIDAL was working for you fine previous to experiencing the login troubles that you originally posted about?

Next, I’d like to recommend that you clear your TIDAL cache and see if there is any change.

In the past, we’ve also seen that some have had success using Google DNS to improve their TIDAL experience. Try following the instructions in that link and see if the experience improves.

Hi again! Nothing works… Roon is very slow. Everything started to go wrong after recent major Roon software update. Before that it worked fine.

Thank you for the info, @Philip_Yalovega!

Ок. Each time I change anything in the setup or configuration, it start extremely slow and then gain some speed, but anyway sometimes getsvery slow…

@dylan
Now I directly connected iMac to ethernet and excluded PS Audio DAC from the network for now. The speed did get better with fewer breaks and stops, but still no artwork. Is the speed to the core more important to the speed of internet to DAC? What are the optimal settings in Roon which provide the best possible speed? Again, all things went wrong after Roon update. It is extremely painful to resolving all of this…

@dylan @support
hi again, any news on the above? Do you think VPN could help? Can you put on hold my subscription at least for now - it is just not right to pay for such crappy service…

I wanted to apologize for the delay here as we continue to investigate. I’ve been keeping an eye on our servers, waiting for the aforementioned diagnostics report.

The speed did get better with fewer breaks and stops, but still no artwork. Is the speed to the core more important to the speed of internet to DAC? What are the optimal settings in Roon which provide the best possible speed?

You’ll definitely want to be connected via Ethernet for optimal speeds.

As mentioned above, these symptoms typically point to a networking issue, which I believe may be at the cause of the behavior you’re experiencing. When you are able to send me the logs I will have the technical team investigate further, but in the meantime I’d also like to confirm a few more things and propose another test or two to help us gain insight into the potential issue here.

Thank you for the update, @Philip_Yalovega!

No, on the contrary I want to try VPN router - it might be issues with Telegram blocking, which somehow intervenes the service.

Based on this info, I think trying a VPN would be a great next test. I spoke with the techcnial team about this, and it appears that this may be the issue. Some of our servers make use of the Amazon and Google IPs that were blocked, which could likely be the cause of the behavior you’re seeing. Please try a VPN and let me know if that improves your experience.

Hi again! Miracle just happened now. I installed nordvpn on my iPad, connected to vpn, tried Roon, everything started to work flawlessly. I didn’t even set up the core with VPN. But then, another even greater miracle happened - I switched vpn off and still everything works… What was that? Did you changed your IP addresses?

Thank you anyway for your care and patience!