Bring all your digital music to life with the new McIntosh MCD12000 SACD/CD Player.

While classified as a CD player, it is better to think of the MCD12000 as a reference level Digital-to-Analog convertor (DAC) that includes reference level SACD/CD playback capabilities. Music played through any of the MCD12000’s digital inputs or from compact discs is processed by professional grade 8-channel DACs designed for premium audiophile performance and recording studios. The MCD12000 is the perfect DAC and SACD/CD Player to use with the reference level C12000 Preamplifier or MA12000 Hybrid Integrated Amplifier.

@7NoteScale - this looks like you’ve posted the sales blurb from the McIntosh product page. Us mods hope that someone will follow up with their practical experience of this new product…

It doesnot release until later this month

Wondering why 8 channel Dacs are mentioned but it appears to be Stereo Left/Right output only.

What does “reference level” mean, actually?

A few details from ecoustics.com:

I have watched (and owned) McIntosh over the years. They have many marketing strategies including the Fair Trade Agreements that prevented their equipment from being discounted. They created brand recognition, and their units are very reliable with high demand in the used market. Their cosmetics became their trademark. I owned a couple of FordGTs with McIntosh stereo from the factory.

They have done very well and do about $45mil per year. Then when A/V emerged they went that direction. Their A/V like their stereo was never price competitive and the resale, in contrast to their stereo, and the A/V was/is poor.

This new SACD component does not seem (to me) to be well conceived for the price. It has a proprietary input into which you can plug…your other McIntosh SACD transport. And their choice of DAC components appears to be directed toward reliability and low service needs.

Like most McIntosh products, IMO, probably overrated and definitely overpriced.

Brand recognition and those absurd meters mean a lot, I guess.

(Couldn’t they have made it bigger?)

Back when I was an audiophile, I had a McIntosh MC2105, the MR73 tuner, C26 preamp and the MPI-3 performance indicator. It was a nice system along with a Thorens turntable and Crown open reel deck. This was a few years after McIntosh created its specific cosmetic appearance. The market largely led by Stereophile, Absolute Sound etc was moving toward Audio Research (then called Peploe as I recall). I never returned to audio as a hobby. In either case, the Maximum Performance Instrument was a cool little device.

The best stereo I ever heard in my life was a showroom Mcintosh setup about 15 years ago. It had everything, mono blocks etc and was valued around 80K. It sounded amazing. I later purchased a much more conservatively priced integrated amp, the McIntosh MA5300. It sounds good, I never once heard any electrical buzz or feedback in the sytem and it’s built like a tank. I’m not saying it’s the best there is, but it serves me well.

That is how we feel. It is good sounding, robust and reliable, very easy to resell and can last for decades.

McIntosh or not, it’s a CD/SACD player. I can rip CDs on my computer and could also rip SACDs on my BD player - if I had SACDs. Target audience is either nostalgic or believes in transport magic. VU meters are definitely cool, but if you need to watch something wiggle or spin when listening to music, you’re not listening to music.

Of course, it will not compete with the McIntosh. But for those for whom cost is a limiting factor, it does sound very good and it would leave £13k to spend on other goodies, HiFi or otherwise.

The 8300CDQ looks like a good bundling of essentially the same functionality – minus the wiggling VU meters, of course – for a more reasonable price. But the McIntosh isn’t primarily about functionality, it’s about luxury and display of being “comfortable” enough to afford it. The Audiolab unit can’t really provide that.

That was very well stated. There are many analogies in the car world.

Can’t disagree. As I said, I like McIntosh but won’t pay their price. I have no issue with those who will.

My iPhone keeps excellent time…it should…a Rolex and Patek Philipe keeps no better time, but there is pride in ownership. That is the basis of some seeking McIntosh. I personally went from H.H. Scott to Marantz to McIntosh and there I stayed with some venturing into Conrad Johnson etc. I returned to McIntosh for reasons already well stated (by you).

BTW, I hope that many recall that the Marantz 10B FM tuner had an oscilloscope, and that:

By the mid-90s, VU meters began to disappear from home audio gear, leaving a few niche hi-fi manufacturers to carry the torch for a once-ubiquitous feature.

However, as Technics and JBL have shown us in recent years with their respective turntables and loudspeakers – not to mention the vinyl revival – what’s old is new again. Yamaha has put VU meters on its latest batch of integrated amplifiers. Technics and TEAC pulled the same trick a few years back. Some manufacturers – McIntosh, Luxman, Accuphase and Audio Research – never gave up on the bouncing needles."

I had one of these in the '70’s. Always fun to watch the meters, which were actually helpful in tuning in faint FM stations. This has an LED bar for “relative power output”, also fun to watch. 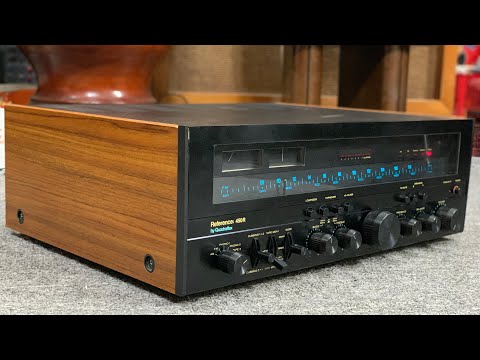 As I recall during the received power wars, Marantz, Pioneer and others had VU meters. I find it interesting on our McIntosh MA9000 that the meters remind me that even at levels that we prefer, we are often only modestly moving the needles.

Did you know that McIntosh receivers were not branded “McIntosh”. In an attempt to keep the brand more excluisve the receivers were labeled MAC. Ferrari did this with the Dino.

I’ve always rather liked VU metres but sadly have no so equipped gear now. The last piece I had was probably my Aiwa AD 1250 cassette player which was frivolously bought for it’s (then unique) wedge shape. A marvellous thing to own and I wish I still had it.