Hello - I am new here and have been scanning the conversations looking for other user experiences but not quite finding what I need. I am very intrigued by the concept of Roon, particularly the consolidation of music between local NAS stored material and streamed preferences and the enhanced information and user interface available from Roon. We are building a new house with a central server facility that will house a multi room amplifier serving wired speakers to each room. I initially thought of using a multi room network streaming device, but the few that I can find seem to have various issues, particularly with Roon - NADs CI 580 seems to only show up as one endpoint, rather than 4 and Bluesounds B400S is not Roon Ready. That leads me to search for 6 separate Roon Ready endpoints to supply each channel pair of the multi room amplifier. Is the best bang for the buck 6 x Bluesound Node 2i, or are there other endpoints out there in a similar or better price range that can offer a pleasing audio and user interface experience with Roon?
Appreciate any and all feedback!

I would suggest that you look for one or two used, Meridian/Sooloos Ensemble. It is stable and plays very well with Roon, 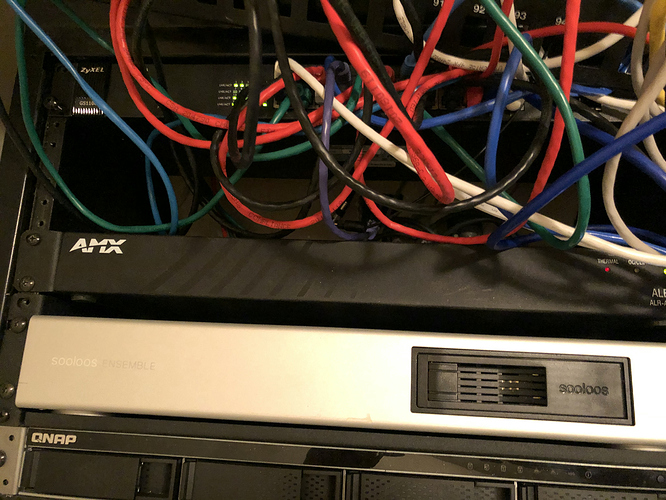 I have a similar setup to what you want to do. I have a 4 zone amp that used to be feed by a NAD CI580. Each zone is for a separate room in the house, so I needed 4 Roon zones. I have another zone for a separate 3 zone amp in the garage (6 speakers one zone really) and a 6th zone is for outdoor speakers which again use a multi-zone amp but just a single Roon streamer. The CI580 was great for a few years until NAD updated the firmware and broke Roon. They admitted the bug but instead of fixing it just stop advertising it as Roon Ready. I recently replaced it with a new device from Whirlwind Audo https://whirlaudio.com/WhirlWind.html This is a true 4 zone Roon streamer, no BluOS. It was simple to install and configure and has worked great for the 2+ months I’ve had it. The garage and outdoor zones I use two BlueSound Node 2i.

The Whirlwind works the same as the CI580, there is only one IP address but Roon sees it as 4 different zones which can be handled separately or grouped together just like any other Roon zones.

That sounds interesting - where can they be acquired? Most of the tabs on their website have nothing behind them?

I have an older centralised multi room setup that I’ve mostly switched to Roon.

Because of the way the system was wired I now have 5 Ropieees on a shelf together.

For non critical zones I’d recommend it the amp hat, pretty inexpensive, tiny, and reliable. I’m planning an extension - and will do this there, although will wire Ethernet to each roon, and wire speaker locally (the older systems has all the speakers wired to a central point).

I used a Pi3B/HiFi Berry Dac2 HD and AAMP60 - but there are other alternatives.

I also linked it to Home Assistant - so I can turn Roon radio on in the shower using a Philips Hue wireless switch.

For critical zones I have a more traditional setup - but still use Ropieee streamers. The exception is the zone where I mix music, where I use a Mac and Powered monitors (via an AES)

Roon is a fantastic multi-room system.

If you’re running multiple Raspberry Pis as a cluster, mining rig, server farm or any other project using multiple boards, our expandable Raspberry Pi cluster fan case is a great way to stack, display and cool your setup. Each pack comes with the...

I haven’t needed to install the fans, but I did need extra standoffs to clear the various HATs

I bought my Whirlwind from Andrew at Small Green Computer.

What 6 zone amp are you using?

These were cleared out a couple of years ago on eBay for $400.
https://www.amazon.com/AMX-Amplifier-Distribution-Hear-Dissipating-Amplification/dp/B01N97R9YO

Hi James- If your going that route, and plan to use volume control through Roon you really have no other choice than getting a Node ( or other endpoint for each zone.) I have 2 RAAT endpoints (Auralic) and one is in my distributed audio rack so I can use local keypads for volume control and other sources.

The Whirlwind will do Roon volume control on every zone individually. No need for other controls for the amps. If you want to do 4 zones, get one. If you want to do 5-8 you can add another or just use a pair of other Roon single zone streamers for the other two zones. I would avoid the BlueSound Node in this case because there have been reported issues with sinking between native RAAT zones and Node 2i, although I haven’t experienced it (I rarely try to sink the garage with indoors zones. I have run indoor zones with the outdoor zones and have never had an issue but don’t do it that frequently.

Thanks Mark - I was hoping to avoid local keypads etc., it introduces a level of complexity that my other half doesn’t enjoy as much as I do - i assume there are no multi zone distributed solutions that enable single user interface through Roon, other than Node 2is or Karl’s suggestion of the Whirlwind?

I looked for a long time wanting to replace my CI580. I never found anything. Finally, I contacted Andrew at SGC about building a custom box for me and he told me about the new Whirlwind that was just coming out. I got one of the first, I think.

The Ensemble can be controlled through Roon interface via the core computer, in my case, I use a late 2012 Mac mini, or any phone or tablet. No need for keyboards. This includes zone selection and volume control.

No problem James. I’m in the industry and mixing a network based system like Roon and traditional distributed audio is a little rare. But it’s what I like. When I wired my house a long time ago its was traditional distributed audio with key pads for analog volume control which I still prefer. So if you want to use Roon as a source/core, this is what I did at my main rack.

Nucleus + to RAAT to DAC to Multi Channel amp. Of course, this is only one source of music for each zone, but each zone can be turned on and volume controlled in each room. My second RAAT is in my main listening room and that can of course be grouped when we have parties etc.

I’m not familiar with Whirlwind, but it sounds interesting if Roon can ‘see’ it as 4 distinct zones and send different audio through it to each zone. I’m also not familiar with how well the Node works with Roon. I have Auralic endpoints.

I do a LOT of group play and nothing come close to Roon’s ability to handle that, and the interface is fantastic. If you find a better solution let us know!

Here is a pic of my main rack. It’s a mess but it sounds amazing. 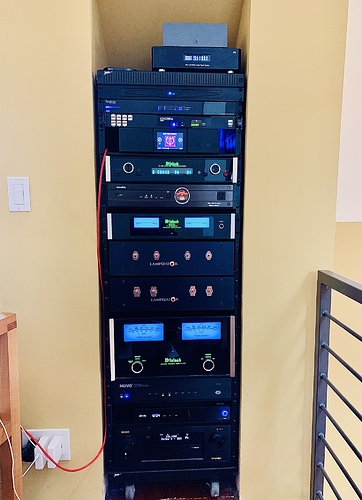 Agreed. I prefer analog volume control and the full resolution of the files I play. Quick question. Obviously the sooloos can be grouped together, but can anything else you have be added to that group? I thought no?

Hi!- This is interesting. Can you send a screen shot of the audio zones available? And a pic of the Whirlwind? I can’t seem to find it.

The company is called Whirl Audio, the 4 zone streamer/DAC is called Whirlwind. I posted a link earlier in the thread. https://whirlaudio.com/WhirlWind.html
The zones look like any other Roon zone.

Capture777×1681 110 KB
In this example it shows 3 of the 4 zones. Billiards room, Gym, and Living Room/Dining room are the three and you can tell they are Whirlwind by the icon they all share. There is a fourth but it is farther down the list and off this screen.
next page →