This has got to be an easy one, but I’m struggling.

I can’t seem to sort out how to control volume on my Airport Express connected to a pair of powered speakers (beyond turning the volume down on the actual speakers).

Is there a way to control the software volume of an AirPlay device (I’m not worried about the quality loss of this volume method in this zone)? I thought perhaps I had disabled volume, as I can do on the squeezebox options, but the AirPlay panel only has a disable option.

Perhaps it isn’t possible. My search skills are failing me here. 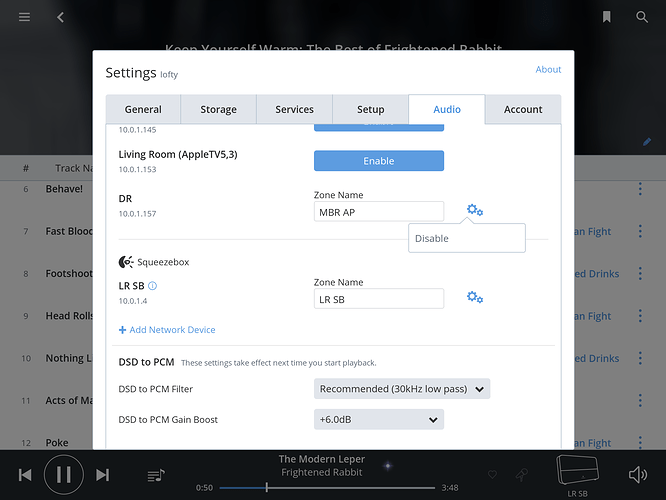 Use the volume control in the bottom right corner.

Thanks, but that had no effect on the volume. That was the first thing I tried. Is that working for you?

Roon supports volume control on all airplay devices that are capable of it.

First, switch to the AirPlay zone: 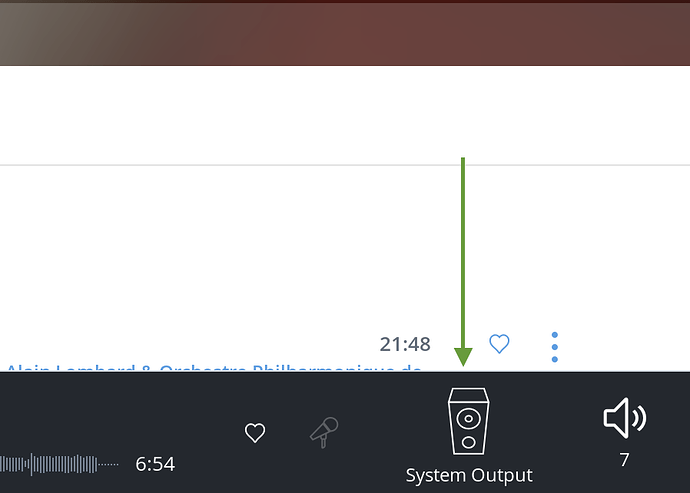 Then click the volume icon in the lower-right corner of the screen, and adjust the volume: 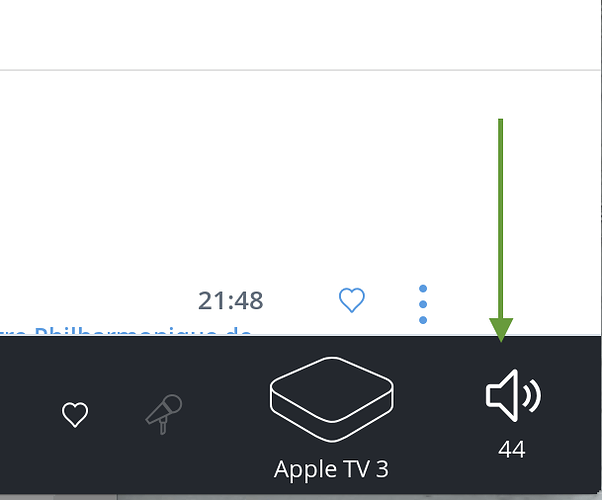 Thanks, but that had no effect on the volume. That was the first thing I tried. Is that working for you?

Yes, I just tried it with Roon 1.2 and AirPlay to Apple TV 4. Works fine, so something is up with your devices. Have you tried just restarting everything? 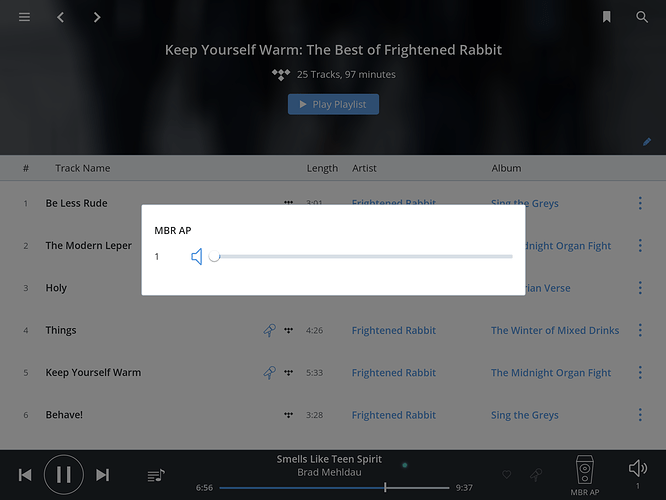 Are you sure you’re controlling the right zone?

It’s an old Airport Express, not an Apple TV. Could it be that it’s not supported?

It looks like it, in his last screenshot. This is strange–we don’t actually have an AirPort Express here, but AirPlay volume controls work on a lot of other devices, and there’s no reason I can think of why this one should be different.

Are you using the analog out or the optical out?
Does volume control work with this device when you use iTunes?

I’m using the analog out. Just checked with iTunes and I can adjust the volume using that interface.

In all my other zones, where I can, I’ve got the volume fixed. Is it technically airplaying from core, and therefore grabbing the setting from there?

It’s an old Airport Express, not an Apple TV. Could it be that it’s not supported?

Ooohhhh. The old one. I don’t think that model works very well with Roon.

I don’t know the exact details of what makes it different (we have never seen one–Roon is about a year old, and that product turns 10 next year).

Apple did a pretty serious re-working of the AirPlay protocol in ~2011, and every Apple device sold since (and every non-Apple AirPlay device sold, period) speaks the new way. We speak the newer protocol version too. iTunes likely has a specific set of code for talking to this one device.

Maybe there’s a way to update the firmware in that device so it behaves like a newer one? If not, I’m out of ideas

As with anything else, If we got enough feedback on this, we’d do the legwork to make it work.

It’s probably easier for me to go out and grab a pi, rather than you trying to sort out why a 10 year old device won’t adjust volume.

I’ll enable my Apple TV and if that works we can at least confirm that it’s the device and not something else in my rig complicating things.

@brian, I have a somewhat different issue with Airplay volume control: I’d like to be able to run a fixed volume to my Airplay device (NAD D7050) and control it locally from there instead.
As someone mentioned earlier in this thread, there’s no option to set ‘fixed volume’ in Roon for the device, and Airplay simply disables the volume control locally on the device, which I find rather cumbersome in practical terms.
Is this an inherent thing in the Airplay protocol or is there something that can be fixed…? (or is it related to the Airplay implementation by NAD?)

For the most part, AirPlay is not very flexible on these points. As far as we know, the AirPlay protocol doesn’t have a way for a device to tell us “I don’t support Volume Control”, nor is there a way for us to tell the AirPlay device to disable its volume control.

Do you get better results when you use the NAD with iTunes? If you do, I’d be interested to know what differences you’re seeing with Roon–if you find something, it may point towards undocumented AirPlay details that we aren’t aware of.

@brian, thanks for your quick reply, much appreciated.
Had to install iTunes on my computer, as I haven’t used it for some 10 years.

Anyway: playing to my NAD from iTunes via AirPlay works spotlessly. I.e. the volume knob on the NAD behaves just as for any other (fixed level) source. And vice versa, the volume control within iTunes controls the NAD without glitches.

And here comes the weird part: while playing to the NAD from Roon, the volume knob now works! Sort of. It’s rather erratic though, with huge lag - and for some reason, it seems to react much better to volume increases than decreases. Anyhow, it’s erratic enough to not warrant it’s use.

I guess these findings support your suspicions raised toward the end of your posting above? Please let me know if there’s anything I can do to help you to sort this out further!

AirPlay is, unfortunately, not an open or documented protocol. We usually end up figuring out problems like this by getting our hands on a device and poking at it. We’re going to reach out to NAD and try to get a copy of this device.

I started having the same issue with my AE’s. Both units used to work great w/ Roon, but no longer. The newer model doesn’t work at all (Wifi “n”) and the older model plays via Roon just fine (Wifi “g”), except the volume no longer works. I’ve tried reverting to an older firmware version on each AE, but this made no difference on either unit.

Has anyone tried the latest Airport Express hardware with Roon recently? Or the 2nd Generation Apple TV?

I’m having the same problem. Four AirPlay devices, two old AirPort Express devices over Ethernet and two new. Volume control works on the new ones but not the old.

I can access two ways - either networked or connected - the first is Airplay Streaming the latter, Core Mixer - is there any quality difference between the two?