Remember to listen to the album before voting. 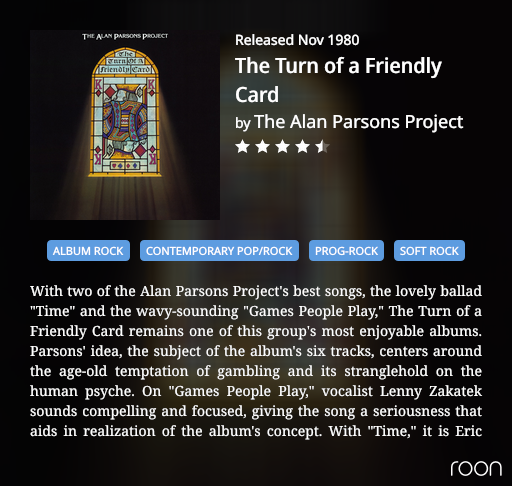 I knew that was reason that I never cared for the Alan Parsons Project and why my interest in most progressive rock waned as i became more of jazz fan. Thanks for reminding me!

Ha! I love this one.

But opinions will vary!

I freely admit to being a jazz snob.

Love jazz. Love it. Probably not a jazz snob though. I think you brought up Oscar Peterson the other day. One of my favourites.

Don’t get me wrong - I like lots of other types of music, including progressive rock, however my tastes in prog rock run more towards the less well known groups such as Henry Cow, Art Zoyd, Etron Fou Leloubran and other rather obscure artists. Of the better known prog rocks groups I like King Crimson.

But jazz is my real love. I like most types of jazz other than smooth jazz. I’m also fairly selective when it comes to fusion - pretty much hit or miss for me. Been listening to jazz since the early 1970s when I discovered electric Miles Davis and never looked back. Check out the Miles Davis album “Dark Magus”, a live album recorded at Carnegie Hall, NYC in 1974 - a show I was at. 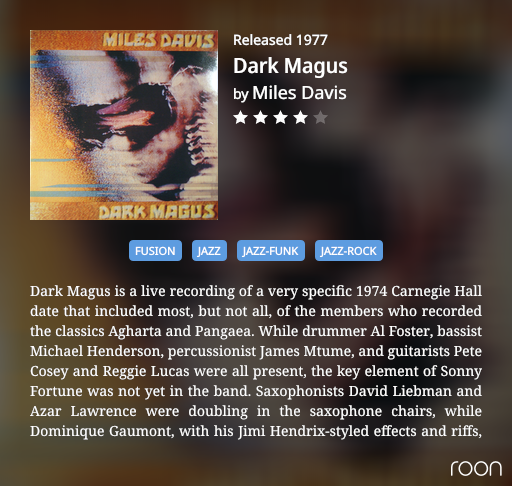 I’ve been trying to listen to this one through but I just can’t I am afraid. I loved day’s 2 & 3 (joined the party a bit late for 1 but know I like that anyway).

Just something about this - it should be right up my street but sounds entirely manufactured and forced. But 3 out of 4 so far is a good hit rate when sampling entirely new material to me

Lushly produced, but that’s not why I listen to music. I’ve listened to this album two or three times now and whilst it has its moments I’m not really getting it. It’s all rather too nice. In fact, what follows on Roon Radio is so much better.

Blockquote It’s all rather too nice .

I think this shot sums up perfectly what I felt whet listening to it. Just a bit twee when it could have had a but more of an edge to it…

A really first rate example of a real human drummer sounding exactly like a second rate drum machine. In other words, rhythmically not very interesting or even mildly challenging. But the singing is nice!