Different Fischer Dieskau Winterreise performances shown as versions of each other

I have many different performances of Schubert’s Winterreise in my library, six of them sung by Dietrich Fischer-Dieskau. Today I noticed some of them were missing from the Tracks view. After some fiddling I found out that some of the albums I was looking for were joined in a cluster of “versions”: 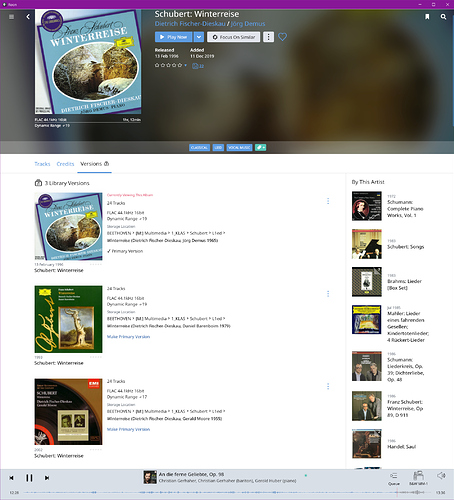 Even weirder is the fact that sometimes, all by themselves, albums dissappear from and after a while reappear on this list of versions. For instance, I’ve seen the 1955 performance with Gerald Moore at the piano appear and disappear from this cluster. As soon as it is cut loose from the versions cluster I can find it as a separate album. And when it is in the cluster, it can no longer be found as an independent album.
The performance with Murray Perahia on Sony has at one time also been a part of this versions cluster. Although I’m not sure it was the real reason but after replacing the folder.jpg image file in this album’s directory by a higher resolution one, the Sony album suddenly became an independent album again…

This the situation at this moment: 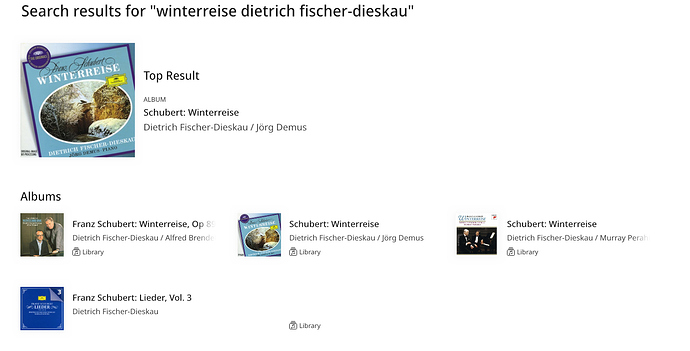 image1591×810 170 KB
It appears as if there are only 4 albums containing a performance of the Winterreise by Fischer-Dieskau in my library, while in fact two of them are “hidden” behind the album on which Jörg Demus plays the piano (DGG “The Originals” series).

When the albums are “hidden” as a version of another album, they are not listed in the Tracks view. I was counting (or at least I was trying to…) the number of files in a directory “Schubert/Lied” and the number I found in the Tracks view was lower than what I knew to be the right number (as given by both MediaMonkey and Windows Explorer).
This can’t be right, now can it? I expect each and every track in a given directory to show up in the Tracks view, with no exceptions made for whatever reason, but most certainly not because some albums are (incorrectly!) considered to be Versions of another album.

Firstly, I think it’s not an unreasonable demand that a Roon user must be able to ascertain the number of imported files is exactly the same as the number found by MediaMonkey or Windows Explorer.
And secondly, having albums being hidden in Version clusters is also very undesirable!

EDIT (the next day):
This morning the situation is like this: 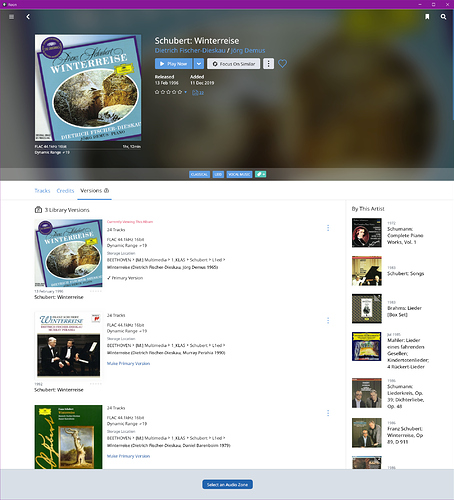 image1920×2110 776 KB
Especially the unpredictability of which albums are visible as “stand-alone” albums and which ones are not and the fact that the passing of time seems to be a decisive though random factor, are maddening!

By the way, all of these albums have been identified by Roon.

Here is a comparison between the track durations of the Jörg Demus and Murray Perahia performances that shows that the differences are greater than what Roon normally finds acceptable in the identification process of an album! So how can these two albums be considered to be clones of each other??? Also, these albums all consist of 16/44 FLAC files. 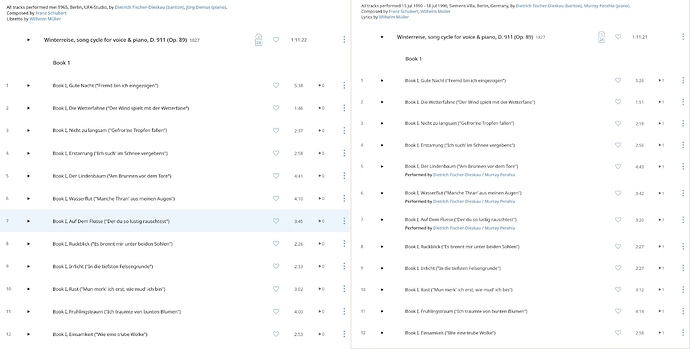 having albums being hidden in Version clusters is also very undesirable!

Notwithstanding your other points, this one can be somewhat fixed by toggling Settings > General > Show Hidden Tracks And Albums; see this KB article

You’ll still get the versions tab, but the duplicate albums and tracks will be shown in the browsers.

Thanks for this tip, @BrianW
It works. In the Tracks view the number of tracks in my Schubert/Lied directory now corresponds exactly with the number as given by MediaMonkey and Windows Explorer.

But I suppose we both agree that the clustering of albums that really are quite different from each other, despite sharing the same singer, composer and composition, into various Versions of each other most certainly is a bug?

Is it true that there is currently not a way to tell Roon that a specific album is not a version of another album? Would it help to manually add the product code or some other album-specific identifier in the file tags (not sure if you already did that, @Hans_Valeton)?

Not sure if this is a stupid question, but I am still quite new to Roon and, as a classical music collector, can see myself getting the same problem as @Hans_Valeton

Is it true that there is currently not a way to tell Roon that a specific album is not a version of another album?

I had this question at the back of my head but forgot to post it here. Maybe there is an official (but hidden) way to un-merge versions? Such as there is to un-merge compositions and artists?

Not sure if this is a stupid question, but I am still quite new to Roon and, as a classical music collector, can see myself getting the same problem as @Hans_Valeton

Well, there are no stupid questions, as they say, and mostly that is true. I am also a Roon newbie (started in December of 2019) and still finding my way in the Roon ecosystem that at times I find dauntingly complex. Welcome to the club, @Martin_F!

Is it true that there is currently not a way to tell Roon that a specific album is not a version of another album?

In the versions tab, for the album in question, 3 dots edit > remove from duplicates.

That is helpful - thank you, @BrianW!

So how can these two albums be considered to be clones of each other?

clustering of albums that really are quite different from each other, despite sharing the same singer, composer and composition, into various Versions of each other most certainly is a bug?

When Roon finds albums in your library with similar artist and album info and similar lengths, they are considered to be duplicates.

…it all depends on how one defines similar.

@BrianW Something „similar“ should not be considered to be „identical“, so that is a a design flaw in Roon, vulgo: Bug.

Can we move this into the Feature Request area for getting fixed?

But as Roon have used the word “similar” rather than “identical”, I imagine Roon would argue things are working as designed.

That is not to say that your preference is wrong and I think a feature request is an appropriate way to try and persuade Roon otherwise.

I would rather not extract posts from this thread as it all hangs together as it is; could you instead please write a new post in the #roon:feature-requests category and Roon will consider it and any supporting responses in their future plans?