Thanks. I think the ones that doesn’t work is older Intel integrated graphics. My laptop has HD Graphics 3000 which is one of the non-working cards.

HD 4000 works for me. The HD 3000 had some issues previously that were cured by using the 32 bit version of Roon. Has anyone tried that?

Yup, and no different

OR the Roon Team could release a fix in a timely fashion? (@Support)

Of course. I’m just suggesting a temporary workaround, not that it is a solution.

In this situation, the Roon team needs to cancel all updates while solving the problems that have appeared and allow the user to return to the old 1.7 build , and recognize that the release of version 1.8 was too early.

As above, I saw that you had tried going back to 1.7 but Roon was updating automatically back to 1.8. So I suggested the settings to use to stop the update.

This issue seems to have appeared after Roon resolved this issue in Build 778:

Core Machine (Operating system/System info/Roon build number) Roon 1.8 build 764 (64 bit) Running: Windows 10 Pro|20H2|19042.844 GeForce Driver 461.72 Description Of Issue After updating to GeForce Driver 461.72 yesterday on RTX 2080ti, I have all kinds of screen artifacts flashing during the navigation on Roon 1.8. This does not occur under the integrated Intel driver and did not occur under the previous NVIDIA driver build. Anyone else in the same boat?

So sadly maybe the solution will be subject to a longer QA process, so not to impact further GPU configurations when fixing this issue for Intel integrated GPU users.

Reinstalled version 1.7, all problems gone, both graphics and DAC recognition
Intel HD 3000, i3

Running on Ethernet. I pad Air as remote with current Apple OS

USB to icron 2224 fiber extender to dac about 50 feet in another room.

Haven’t fired up the system in about 3 weeks. Roon has been running fine, absolutely no issue since last update which was 1.8. Saw an update was available so I performed it. And now I get this: 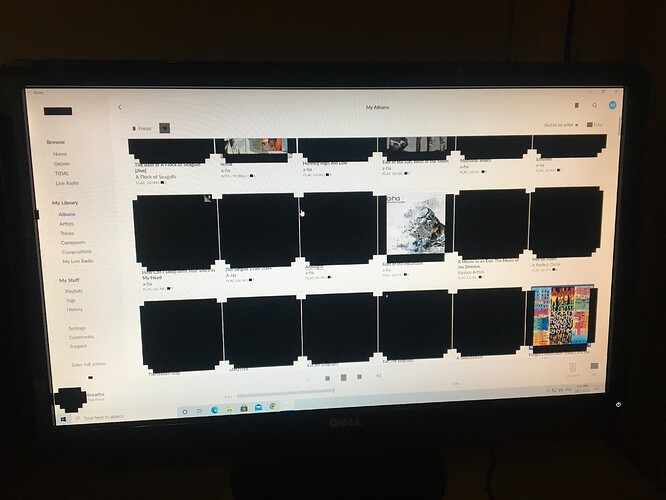 Just as a FYI - there are some responses from Roon on the issue:

Core Machine (Operating system/System info/Roon build number) ROCK OS 1.0 B227 Roon Core 1.8 B778 Network Details (Including networking gear model/manufacturer and if on WiFi/Ethernet) Wired Audio Devices (Specify what device you’re using and its connection type - USB/HDMI/etc.) This is just relating to Roon on a Windows device Windows 7 on an HP Elitebook 2540p i7 Intel HD Graphics Everything was working fine with 1.8 until this latest release (B778) Description Of Issue Display look…

Thank you. I’ve been lurking all evening, just noticed the other thread upon posting mine. Will try the recommended fixes and report back.

Sorry to hear that, I would suggest also posting in that topic so Roon have a better idea of the number of users effected.

I have same issue here. Looks this is a generic issue for many users. ROON team, please check this. And I would recommend to allow users to download build 764. Now only build 778 can be downloaded.

I have the same issue. Windows 10, ethernet, build 778. iOS apps on phone and iPad are unaffected

Still having the same issue after checking drivers.

Next problem: how to get the old app back, the new remote can’t connect to the old (working) core?

Thanks for all the information, everyone!

Our team has managed to get hardware in-house to reproduce this and our team is working to get this solved ASAP. You have our apologies for the ongoing trouble, and rest assured we’ll be sure to keep everyone here updated as soon as we have more information.

As now roon is almost unusable… i think we all would like to temporaly go back to previous build.
Is that possible?

Same problem for me. I have an older Windows 7 i3 machine. Totally unusable. I am really getting tired of these problems.

Yeah I’m not updating for a while, this is why I’m afraid of updates.