Distortion during playback for certain albums

Hi,
I have the same issue with crackling and static type noise, plus intermittent ‘popping’

I have eliminated the equipment as I run a number of systems in our demo room and it’s the same on all products - Lumin, Nativ, EC Living (AirPlay)

It also only happens on certain albums added to ‘my collection’ even if you delete them from Tidal and then search again.

I thought it might be a Core issue on the NAS although it wasn’t a problem with 1.4

Distortion caused by some Tidal tracks

According to the Roon FAQ the minimum requirements have always been an i3 processor. See:
https://kb.roonlabs.com/FAQ:_What_are_the_minimum_requirements%3F

I am not saying that is your issue, but, just answering your basic question. I personally use my NAS’ to backup music, as I prefer to run Roon on a PC with local file storage.

Yes, I wonder if it’s time to invest in a new NAS.

I just didn’t want to have an outlay of approx 400.00 GBP and find it wasn’t the NAS

Your NAS is underspecified but I am not sure the issue is processor power. I would monitor the NAS performance to see if anything is red lining. Also look at memory utilisation. If nothing looks stressed it will be something else.

Thanks Henry, I’ll look into that.

It’s strange though that the distortion only occurs on some ‘saved’ albums and not all.

Internet radio also streams perfectly via Roon and I could have it running all day without a pop or crackle anywhere.

Hey @Richard_James — Thanks for reaching out! I moved your post over to it’s own thread so we can better track what you’re experiencing.

First, I’d like to echo the above statements about your NAS. Because this device uses a Celeron processor you may experience performance issues, particularly with larger libraries or DSP, or if you don’t use an SSD for your Roon database.

I don’t believe that the issues you’re experiencing are necessarily due to this, but we do like to give people a “heads up” when their system is under spec, since it can impact the product in a number of ways, and you may encounter some limitations going forward.

I had a look at the FFMPEG thread - is there a really simple explanation of how to update this on a qnap, my tech knowledge is very basic

Can you share a screenshot of the signal path when playing this? 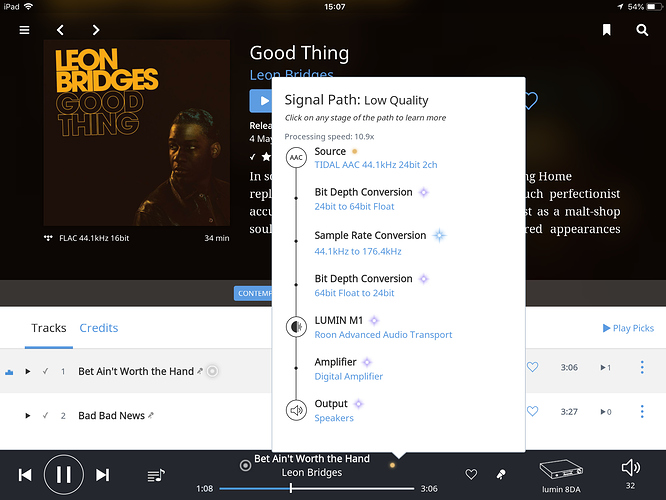 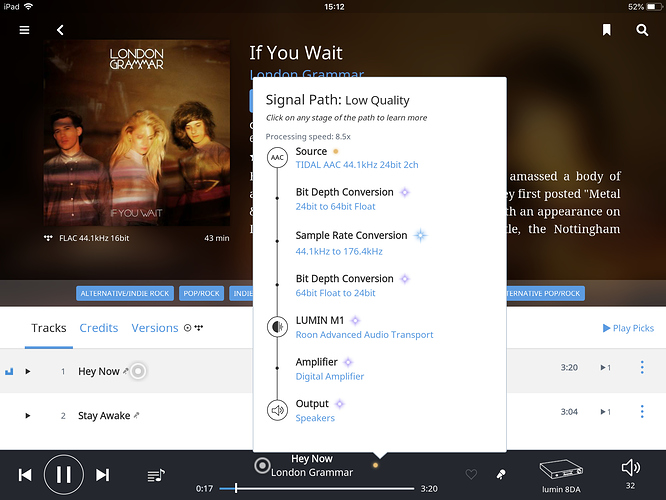 The ffmpeg bug does need sorting, but you could also pay for the lossless service in Tidal. Probably the best way to demo posh gear like Lumin!

Based on the information you’ve provided above, it sounds like you may be experiencing an issue we are currently working on a solution for regarding the playback of AAC files, though this typically effects all AAC file playback. Though we are working on a solution (which should be available pretty soon), some have found more immediate success by update FFMPEG, as discussed in this thread.

Actually I started with the more expensive version of Tidal, but I found that if you have a Dac that upscales then the benefits of a higher resolution input was minimal - others may disagree of course.

The Lumin now does DSD conversion as well as PCM upscaling so plenty to explore.

I’ll most likely sit tight and wait for the fix

I did look at the thread, but to implement on the Qnap seems a little more complicated

AAC sounds just awful on my MOCK, sibilancy, no depth before this change to 24bit it sounded pretty good. it also freaks out my dac on switching from a fullres file on my Allo USBridge and Arcam Dac. I am using the latest ffmpeg to linked in the other threads related to this.

pay for the lossless service in Tidal.

Sadly there are still plenty of music only in AAC at the lossless level.

Just reaching out to let you know we’ve just released an update that addresses this issue. Please update to build 339 and let us know if you have any issues.

Hi all, With work underway on a number of exciting new features for the coming weeks and months, we’ve got some bug fixes tested and ready to go, so we’re shipping a maintenance release of Roon today for Windows, macOS, and Linux. This release is rolling out now, and includes a handful of bug fixes and performance improvements, including a fix for distorted playback on Cores running older versions of ffmpeg. The full list of bug fixes is below. Thanks all! The Team at Roon Labs Roon 1.5 (Bu…

I had been away for a couple of days, but back today with the update and everything is fine.

Cheers from the other side of the pond