AU/VST plugins have been suggested by Dirac as a solution for my static issues with Roon and Dirac , does Roon support AU/VST plugins?
If not, is it possible to run Roon on my Mac mini in boot camp running Windows 7 and also run Dirac in windows at the same time?

Hey @Dannythered – we don’t support AU/VST in Roon right now, but we have identified and fixed some issues with Dirac on Windows, and the fixes will be released as part of our soon-to-be-released 1.1 update.

Let me know if that helps, or if I’ve missed something. Thanks!

Hi Mike,
The issue I am having is with Yosemite , Dirac & Roon

I have not tried Dirac on Yosemite OS for at least a month, but prior to that I had all sorts of issues with Dirac (standalone, not involving Roon) on Yosemite OS, bad noise distortion. Unless their position has changed recently, Dirac did not officially sanction their software on Yosemite. They directedd me to some patches to see if that would improve the situation. They said Yosemite OS was the culprit. On my MacMini I use Maverick v10.9.5 and have no issues with Dirac or Roon separately o…

What are the issues with windows? Was about to instal Windows7 on boot camp and then load Dirac & Roon and run with Windows7, is it worth the time and effort?
Thanks
Dan

Yosemite has a surprising number of audio changes relative to Mavericks. It’s caught us off guard a few times, and more than once when complaining to device manufacturers about misbehavior they come back to us with “we haven’t figured out how to make it work on Yosemite yet”. Which is kind of disappointing, considering it’s almost time for El Capitan.

DIRAC on Windows doesn’t work with Roon using our current production build, but it will work in 1.1 (soon!).

We still support 7 (six years later!), but it’s definitely second-tier in terms of internal testing and I’m not sure we have ever spun up DIRAC on 7. If it breaks, we’ll do our best.

8.1 and 10 get the most attention. They also perform much better than their predecessors. I wouldn’t want to run anything older than 8.1. 10 is a little bit more risky just because it’s so new, but in 6 months I’ll be saying the same thing about 10. If I were setting up a new PC today, 10 is what I’d run. I’d just expect it to take a few months for the various application vendors to catch up.

Thanks Brian, I have just installed W7 professional on my Mac mini , will test 1.1 and if Dirac doesn’t work then I will take the free update to W10.
Steep learning curve & I’m betting update to W10 via bootcamp will not be straight forward…

I have installed Dirac Live on a Macbook Pro. Works flawless.
I just started my discovery of Dirac, but even now its a real improvement in soundquality…
The Macbook Pro is one of my endpoints for Roon, conected to an RME Babyface and a Studer 807 MKII.

Since the upgrade to 1.1 everything has worked flawlessly for me too, whatever the fix was for Windows/Dirac it solved my issues with Dirac/Yosemite. Dirac really improved the sound quality for me too, a couple of bass nodes really impacted on upper frequencies and their removal to the sound to another level.

Since Build 55 I have the previous issue with static noise when using Dirac with Roon , it is worse than before and can be triggered just by advancing from track to track with 24 bit recordings. Build 51 (initial 1.1 release) was perfect.
Can I roll back to 51?

Hey @Dannythered – we have Dirac in house, and while I don’t think anything changed between Build 51 and 55, we’re going to do some testing in house.

@vova is going to look into this and we’ll let you know if we need any more information from you. Stand by!

I don’t think anything changed between Build 51 and 55, we’re going to do some testing in house.

Confirming. Build 51->55 did not have any audio related changes. This might have an external cause. @vova will confirm/deny that understanding experimentally. 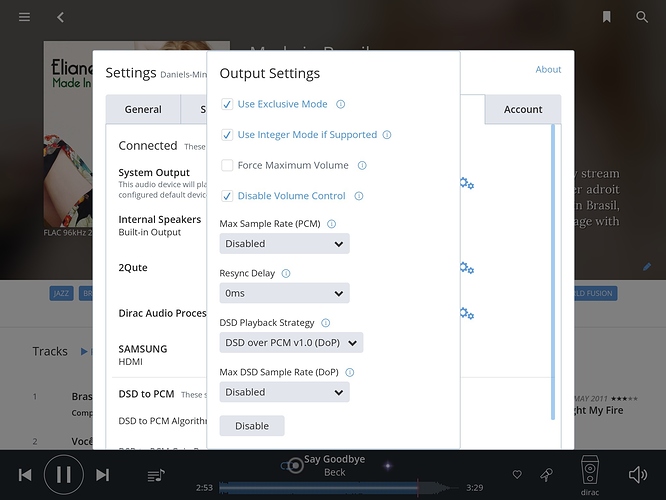 @mike So findings, if I set up a playlist of files all exclusively of the same file format eg. 96/24 then I can play, fast forward, skip tracks etc with no issues, however as soon as I introduce another file type 16/44 or 24/192,88,48,44 then as soon as I do any of the previous behaviours then the issue recurs. However setting up a mixed file format and leaving to play the the return of the issue is a bit more random and cannot be predicted but it does always return at some point. Roon core is on a 2014 Mac mini, the Mac is used for nothing else than Roon & Dirac

Hello
perfect that you have Dirac in house.

will Roon support their .dll convolution files?
I would like to know that asap, otherwise I buy a new software for convolution.

Thanks for your fine product.