I moved my Roon Core from an older MacBookAir to a new Mac Mini last week, and am being driven bonkers by a very intermittent but annoying dropout problem.

Before the move, I had no problems at all. Now, I get a dropout maybe once an hour of listening time. Sometimes it’s what I’ve always thought of as a dropout - a very brief moment of silence - but more often it’s like the music stumbles a little before it catches itself and moves forward.

The new Mini is an i5 with 8 GB of RAM and a 512 MB SSD - not much different from the old MacBookAir. It’s connected by USB (1 meter Mytek Metropolis cable) to a Mytek Liberty DAC. Content comes from Tidal over wi-fi and from files on the internal SSD. Nothing else (of any consequence) is running on the Mini.

I realize the wi-fi is an obvious suspect, but the dropouts also occur with content directly from the SSD, so I think I can rule that out.

That leaves the Mini, the USB cable, and the Mytek.

Is there a clue in the very intermittent nature of the problem?

How about the USB cable? Do they fail in this way?

Worse comes to worse I’m going to return the Mini next week for a new one, but I hate to do that given how long it takes to do a new setup. I suppose I could re-install a Core on the MacBookAir and switch it back in to see if the problem goes away, but that’s also kind of a major undertaking.

Thanks much. (And Happy New Year!)

I realize the wi-fi is an obvious suspect, but the dropouts also occur with content directly from the SSD, so I think I can rule that out.

The Wi-Fi on newer Macs can be temperamental. A long-shot but try disabling Location Services.

Thanks, Martin. Tried that.

Other two suspects to check are Spotlight indexing and BackUp, disable them at least temporarily to see if it makes any difference.

Thanks. I’ll give it a try.

Make sure that you are running the latest firmware for the Mytek Liberty. Check the Mytek support page for further information on how to update the firmware.

I would also check to see if you experience dropouts when using the Mytek Liberty connected to the MacBook Air when it is running as a Roon Remote to the Mac mini Roon Core.

That’s a great idea. But how do I use the MacBook Air as a remote? I’ve already disabled (moved to trash) the Roon Core that was running on it, and I don’t see a way to download just a remote for MacOS.

Thanks, Martin. Turned out the Mytek did need a firmware upgrade, which I’ve done. I’m going to let that play for a while and, if there are still dropouts, will try using the Air as a remote and report back.

John, I know I thanked you for the great idea, which implies I understand it, but now that I think about it, I’m not sure I do.

Just to make sure, you’re suggesting that I:

Do I have that right?

That sounds right. Make sure you are not connecting the Mac mini to the MacBook Air with an ethernet connection directly between the two, the two devices should be connected via a hub/router/switch. I would avoid using WiFi if you can as it adds another variable to the testing that would need to be accounted for.

Ok, thanks. I’m still waiting for a dropout after updating the Mytek firmware, but if it starts misbehaving again I’ll use the Air as a remote and let you know the result.

When I tested Liberty I have occasional dropouts, too. On old machine (fast but old iMac 2013/i7/SSD256). So, I think that Mytek DAC is guilty, and upgrade fw could help you.

If not, I heard about two very annoying problems with new Mini’s. First is with SSD drive (restarts, slowdowns, no stable), second is T2. This chip have some quirks. If you have bad luck (SSD or T2 failures), go to Apple Store and change for new one.

Thanks, Antoni. So far so good with the new firmware.

Just to close the loop, the dropouts resumed despite the Myrek firmware upgrade so I returned the Mac Mini to Apple and reverted to my old MacBook Air. No problems at all (so far, knock on wood). I don’t know whether there is an issue with the new Mini, or whether I just got a bad unit, but I don’t think I’ll try again soon.

Anyway, thanks for your help.

Reviving this thread as I am experiencing dropouts also from 2018 MacMini.

I have purchased a MacMini 2018 with an i7, 32 GB of RAM and 2 TB SSD. All of my music is stored on the Mini. I have the Mini connected to my McIntosh MAC7200 built-in DAC via USB. The Mac is hardwired to my internet router.

It’s worth mentioning that this is my 2nd MacMini. I purchased the stock i5, 8 GB RAM, 256 GB SSD but returned it after deciding to upgrade things a bit. I saw the issue on both Macs.

Everything works very well but I have been experiencing random dropouts. I’ve reduced the MAC to only running ROON core and have removed any upsampling / DSP extras. The dropouts seem to happen randomly but I will get at least one every hour or so. I have experienced dropouts while playing FLAC, DSD files and using Tidal. The capture below shows my path when playing a FLAC file, no upsampling.
Not sure what the next steps should be and would appreciate any advice.
Thank you in advance! 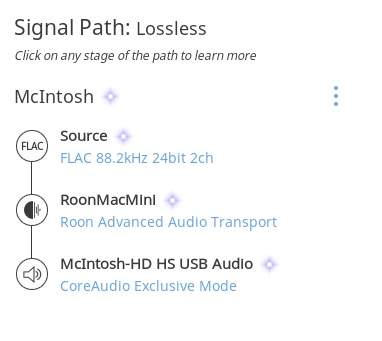 I returned mine and am glad I did (especially after reading your post). Not sure what the problem with the new Mini is; someone mentioned the T2 chip, which seems plausible. I’d be curious to hear from anyone running Roon on a current MacBookPro, which has the same chip.

I'm using a Steinberg UR22 mkII USB audio interface with my 2018 Macbook Pro and I get random audio dropouts. I don't have any crackling or glitches...

WiFi and Bluetooth are off.