When I play DSD64 files in DSF format to my 818v3 over IP it is mishandled in two ways: it is converted to PCM 176 even though the v3 is capable of DoP, and then it is down sampled to 88 even though the v3 can do 176. Obviously Roon is treating it like a v2.

There is no systemic problem, the Geek Pulse attached by USB does get the DSF content converted to DoP.

I have not yet tried the 818v3 through the USB connection, which can also do DSD and 176.

@ncpl Have not updated yet, those are relatively low priority problems that I can work around.

Data sheet spells it out: https://www.meridian-audio.com/support/audio-controllers-support/818v3-reference-audio-core/

Sorry Anders, but there is nothing in that Data Sheet that mentions that the ID41 will accept >2x rate material??

Up to 24/192 material is possible via the SPDIF, Speakerlink and Async USB Inputs…but even then, I would still suspect that all current Internal Processing in the 818’s DSP Engine is still at 24/96 [as it has been within the 800 series since inception]

I have not yet tried the 818v3 through the USB connection, which can also do DSD and 176.

I’m pretty sure that this is the case, but it doesn’t preclude maintaining an internal sample rate of up to 768k. Think “fractal”.

Edit: My hunch (and it is only a hunch) is that the 818v3 uses an internal fractal-like format which is similar or identical to that used to transmit MQA over MHR at max 96/24 data rate.

My comment was really about the 818v3 TODAY…and while I could obviously be wrong, I don’t think the 818v3 currently uses any MQA Processing…and therefore Streams are handled in the same way as they always have been within the 800 series

When Meridian finaises MQA, then obviously the 818v3 will be first in line to receive that capability via a Firmware Update or similar…but the impression I have is that TODAY the 818v3 will accept 24/192 via USB…and output 24/96 [non-MQA] to the D8kSE’s

But I’m saying this without having tried this kit in its current format…and I would be glad to be proven wrong…it just strikes me that Meridian would be “announcing” this capability more publicly if it was already there??

I would be very interested to see the display (with the just released v3.07 SE loudspeaker firmware) when a 4x sample rate source is fed into the 818v3’s USB or SPDIF inputs.

@Ronnie @Viruskiller @ncpl You guys are right, I misread the doc. The DSD DoP references, and the 192 references, are only for USB and SPDIF. Says nothing about what the ID41 accepts. And I refuse to speculate about what the 818 does–I think it would be a good idea for Meridian to describe.

I haven’t yet tested with the USB input yet: have to install the USB driver, and upgrade the firmware to be confident of the results. And then it is a question of whether Roon gets the capabilities of the device from the driver, or if it has a manually maintained table of device capabilities? @Brian?

We do know that DoP has to be converted to PCM at some point, because the DSP processing in the speakers require it, you can’t implement much DSP directly over a DSD stream (e.g. crossovers and apodizing). So it becomes a question of where the conversion happens. If the 818 is fed DoP, Meridian does the conversion somewhere. If not, Roon does the conversion. Or I can do the conversion in dBPoweramp beforehand. Perhaps not the most important.

The doc does say that the 818 fully supports MQA, with no qualifications as to input. But there is an interesting sentence: “On the 818, MQA are decoded and can then be rendered externally in the case of the digital outputs, and both decoded and rendered in the case of the analogue outputs.” Sounds as if “decoded” means unwrapping the origami format and creating straight PCM, and “rendered” means DAC. So that would imply that the 818 has to feed 192 or 384 over SpeakerLink to the DSP 8000SE. Wouldn’t have expected that, seems challenging, would have expected decoding in the speaker.

@Viruskiller How do I update speaker firmware?

Usual route…Put a call into to your PP. They should be able to help otherwise a PP on HH might oblige.

I haven’t yet tested with the USB input yet: have to install the USB driver, and upgrade the firmware to be confident of the results. And then it is a question of whether Roon gets the capabilities of the device from the driver, or if it has a manually maintained table of device capabilities? @Brian?

Configuration for DoP is manual in Roon. It’s just DSD encapsulated within a PCM stream (24/176 for DSD64), so none of the driver subsystems can tell us about it.

From audio settings, enable your device, turn on exclusive mode, and the DSD settings should appear: 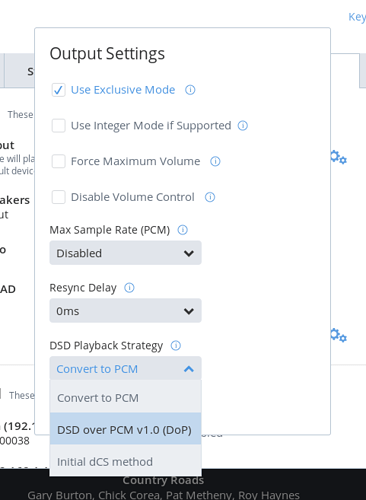 That said, I have no idea what Meridian does or doesn’t support in this area, or whether any of their devices can accept DoP today, or how.

If you leave Roon’s setting at “Convert to PCM” (the default) then Roon will handle the conversion to PCM, preferring to divide the DSD sample rate by 16 (this results in a PCM data rate that’s 1.5x the DSD data rate).

From our perspective, you should be able to play all content anywhere, so DSD works even over ultra-legacy technologies like AirPlay. I’ve been playing DSD through my 808.3/7200s since we launched DSD support in June, using Roon’s software converter.

@Ronnie @Viruskiller @ncpl @brian
I installed the driver, the default configuration in Windows was ok. Enabled it in Roon and configured it. Played perfectly.

Have not upgraded any firmware in either 818 or speakers yet. That’s the next step.

If you haven’t updated the firmware of the speakers, I don’t think you’ll get any joy yet. (That firmware was released a few days ago. Go to HH for more information on how to update etc.)

And I suspect you’ll need an software update of the ID41 and/or the 818v3 to get everything finally in place.

Wow, this is really really really difficult to find. Glad this article was here, but it’s so buried, most people playing DSD will probably accidentally be converting to PCM and not playing in Exclusive/Integer mode. It’s also not entirely specific to the Meridian.

Any likelihood this will be made a little easier?

[update: I see it’s in the FAQ. I found this thread when searching the site, sorry for bumping an old thread]

No, that’s correct, you are getting 192 all the way through USB to the speakers. MHR is Meridian’s secure transport, but it doesn’t limit the content.

The limitation is on the Sooloos network protocol, which still does 96 only.

And we (818v3 owners) are all very curious if and when this limitation will be lifted.