I can’t play DSD music on Hegel HD30. In audio setup “DSD playback strategy” i can’t set NATIVE because its not appear. I use ROCK on Intel NUC.

Hi @Dariusz_Barnas ---- Thank you for the report and sharing your observation(s) with us.

To help aide in my understanding of this behavior you’ve reported, may I very kindly ask you for the following: 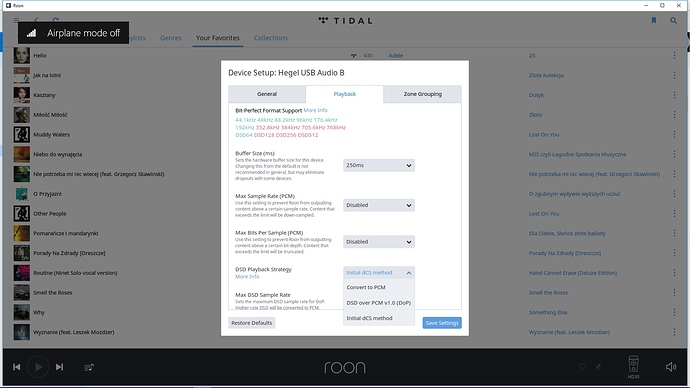 Hi @Dariusz_Barnas ---- I did a bit of research on the HEGEL HD30. According to Hegel’s technical specs for this DAC and the “general information” section found in the device’s user manual, the DAC can handle up to 24/192. Furthermore, based on the screenshots you’ve provided this device is reporting that it can only stream DSD64 content via DoP.

If this device was able to process native DSD content then that selection would be available under the DSD playback strategy.

If you using ROCK, it does not support native DSD at the moment, hope this will change in the future… DoP, there’s two marker format. New hardware will use DoP 1.0 (0xFA/0x05). Older hardware may use the 0xAA marker format.

Not sure your DAC support which marker format. In JRiver, the marker format is selectable to match the external DAC.

I took our HD30 down off the rack to fool around with it and see what’s up. I tried it with several Linux-based platforms (ROCK, DietPi, Ubuntu, and a microRendu), just in case one of them had some magic that ROCK is missing. The result was the same across the board.

My conclusion was: This device is not currently capable of any form of DSD playback (DoP or Native) with Linux at all because Hegel does not support DSD playback on Linux.

You are having trouble with ROCK because, like most media server platforms, ROCK is Linux-based.

This limitation also came up in @ComputerAudiophile’s review of the product.

This situation is very rare. I only know a small handful of DACs that have this limitation.

This chipset does not support DoP (DSD over PCM) in hardware. Normally this choice would render DSD playback on a Mac impossible–since most DACs do not ship with custom drivers for the Mac.

Hegel takes the unusual approach of providing a driver for the Mac that implements DoP support on the computer side of things, instead of in the device hardware.

This approach creates an interoperability problem–since it means that DSD playback requires a driver provided by Hegel on all platforms, whereas if Hegel had taken the more common approach and supported DoP directly in hardware, the device would be capable of DSD playback when paired with just about anything.

Native DSD on Linux is a bit more complicated. It is accomplished by patching the Kernel to recognize and handle certain Native DSD capable devices, one at a time. The xmos-native-dsd project manages this work. Perhaps Hegel would be interested in helping those guys work out how to add support for their products. That is probably the most viable way forward that does not involve making changes to device firmware or hardware.

In any case, one way or another, this Linux compatibility situation is going to have to be resolved by Hegel in order for DSD playback to work on Linux. Until then, you will need to plug the DAC into a Windows or Mac computer in order to get DSD playback working.

Bear in mind that you can still use ROCK as your Roon Core–you’ll just have to run Roon Bridge on the Windows/Mac computer that connects directly to the device over USB.

Sorry I don’t have better news. Hope this helped.

On new version Rock 1.0 (build 148) I can select “naitive” in “DSD Playback Strategy” but DAC Hegel HD30 does not play DSD files. 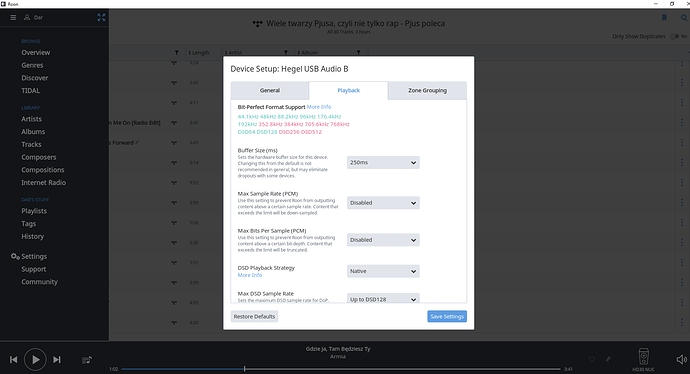