I am having issues with DSD64 and DSD128 playback on Roon build 1.1 (102). The problem is with intermittent pops and clicks at random locations of any DSD track, it is always there no matter what I do.

I tried changing the DSD settings in Roon but nothing helps (changed from DSD-to-PCM to DSD encapsulation). I don’t have the same issue when playback is via JRiver.

I am using Roon on a Windows 10 Pro machine (64-bit) hooked up to a Naim DAC-V1, the Windows machine is an HP Pavilion-Mini Core i5 with 8GB of RAM… I run RoonServer on the HP-Pavilion and control the setup using a Surface 3 Pro tablet running the same Roon build in client mode.

I hope this is something that can be fixed.

I did a quick search and from what I can tell that DAC doesn’t support DSD, so I think you’ll want to use the Convert To PCM setting.

Hi @mike, the Naim DAC-V1 has been recently upgraded by Naim via a firmware upgrade and now supports DSD playback… It just came out about short while ago… here is some news via their forums: http://forums.naimaudio.com/topic/dsd-files-for-dac-and-dac-v1-dsd-software-update

The interesting thing is that if I let Roon convert DSD to PCM and then play it back via the DAC then the DAC shouldn’t really see this as DSD, right? It all works fine in JRiver and therefore cannot really pinpoint the issue at the DAC level.

I will send you the screenshot shortly… 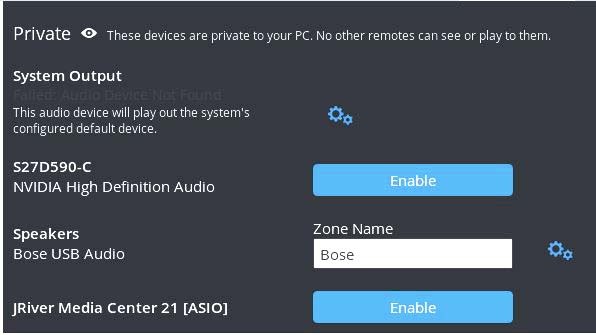 And the Bose audio output settings

Can you try enabling Event Driven Mode and see if there’s any difference?

Let me know how it goes and we’ll figure this out. Thanks!

Sorry @mike, I made a mistake… the screenshots I uploaded in this thread relate to the Bose issue (separate support thread… For the DSD playback the below is the right screenshot:

Ok, no problem but we need a little bit more information here.

Also, when you say:

intermittent pops and clicks at random locations of any DSD track

Do they happen at the start or end of tracks? In the middle? Always at the same time, or at different times if you play the same track twice?

Let me know the answers and we’ll figure this out. I’ll be in touch about the Bose issue soon too

@mike I have this exact same problem. Staticky pops/clicks in the beginning of .dsf files sourced from both commercial downloads and SACD rips. Occurs with Roon only; JRiver does not do this, and I have demonstrated it here consistently, so it is repeatable. It’s a serious issue, and pretty much the only barrier to me going lifetime. Lemme know what info you need to help investigate this.

For me it happens randomly throught all the tracks, there doesn’t seem to be a pattern, a pop will happen, I will simply rewind and it won’t happen at the same location again…

Didn’t test playing to the DAC via System Output yet. will do so and report back…

The skips/pops/hesitations happen randomly and at random locations, never repeatable.

@todd129 – your issue sounds slightly different and I just sent you a PM about it. It would be great if you could confirm the answers to the questions above as well.