Hello all,
Anybody got a DTS CD working with Roon and HDMI connection to the Denon X6700?
Despite recommendations followed (exclusive mode, no DSPs) I get just static noise.
Purple indicator lights up though, and looks like very direct path.
Device Settings tried are 5.1 or 7.1 downmix or Channel, all don’t work.

“It is not possible to play DSD files over HDMI to devices that do not support DoP DSD signaling. This is not a limitation of Roon, to my knowledge only licensed Blu-Ray and SACD transports are capable of native DSD transmission over HDMI”

I’ve tried but have not been able to make it work.

Hi @Mike_LC that’s for DSD this topic is about DTS, which should work.

It would seem like you have all setup correct, could you post a screen shot of Roon’s signal path just confirm.

If Roon is outputting bitperfect then I’d be wondering why the Denon is not recognising the single as DTS. 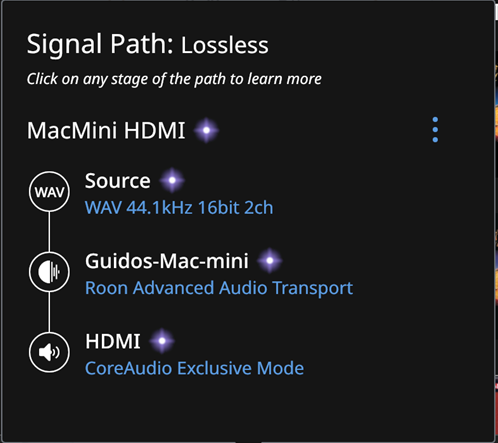 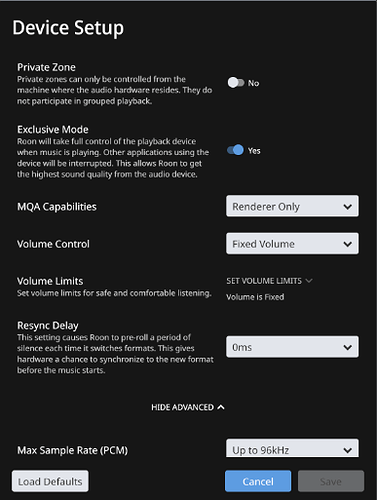 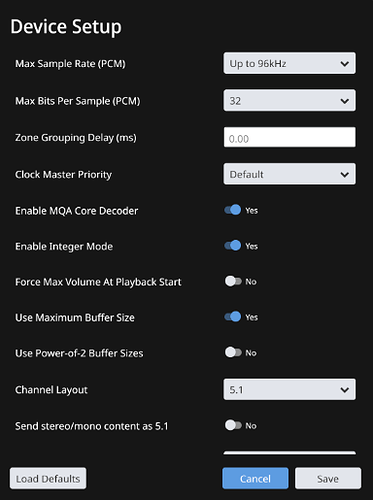 I don’t think that the Denon has any support for MQA - so that setting should be set to “No MQA Support”.

Also, it should be 7.1 for the channel layout setting.

These changes may not help you with playing DTS - but I think these settings will be required for proper playback of MQA and/or multichannel audio.

Interesting, when I now powered on the Mac, Denon still in standby, the Roon settings changed to not a multi-channel capable device, which led to only have the Channel Layout as 2.0 (Grey) and then it worked. (disable also MQA as recommended)
Unfortunately then I could not play 5.1 FLAC’s of course.
So after restarting the Mac again (and the denon was powered on, not in standby) and identifying the device again as a Denon-AVR the multichannel capabilities returned (5.1, 7.1), but the DTS playback fails again.

Trying to enforce from within the MacOS (Audio Devices, HDMI output) to 2.0 also does not stick, as soon as audio is sent it resets to 8 channel there.
I cannot enforce anymore to 2.0 hence DTS does not work.

If your channel layout is capable of Surround you should leave it like that. I don’t believe that this has something to do with your issue.
What kind of Audio information do you see in the album view?

Your FLAC file is identified as two channel in Roon. Why do you think it should be multichannel?

I don’t think it should be multi-channel. I said that the channel layout in the device has probably nothing to do with the issue. As Guido also has 5.1 Flacs it would be useless of continuing switching the Channel Mapping setup.
If Guido gets static noise that indicates as if the hidden code in the DTS is not sent to the receiver.
That’s why I’m curious what Roon says about the Audio information.

Sorry, comment was aimed at Guido! A CD compatible device has to be two channel. It is for the receiver to read the DTS information and do any further processing but your delivery needs to be two channel and bit perfect.

In all cases the DTS ones are 2 channel 44.1 kHz 16-bit Wav or flac files.
You can see this in my first screen capture with the signal path.
I am going to check now if I play a DTS CD (not in Roon, but on Blu ray player) if that works.

And playing a DTS CD through a blu ray player works fine.
My rips, some are seperate files, some are full CD rips, both don’t work.
Let me know if I can share more info.
As said earlier, when the amp somehow this morning was forced in a 2.0 capable device it worked, until I restarted my Mac.
Strange.

Also, I know the files are good, as they work fine through a meridian MS600 to same Amp also using Roon.
It must have something to do with the fact that when playing the dts file the amp still keeps itself in multichannel instead of falling back to 2.0 what in fact a DTS rip is.
I see this on my Mac in the audio device app, that 8 channels are maintained while streaming.
Make sense?

What are the settings on the amp. From memory (I have only ever owned one DTS CD) you need to set the amp to ‘pass through’ or some similar setting. It shouldn’t be trying to convert the signal.

I actually meant this screen. It should state CD 5.1 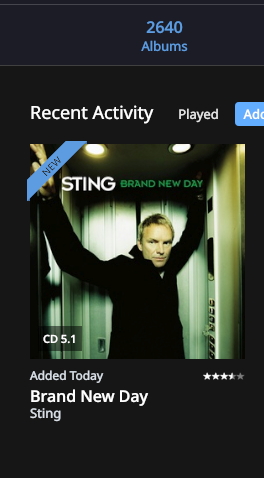 It says just CD. What determines the difference between CD & CD 5.1, as to my knowledge a DTS CD is a normal CD, which unfolds in the receiver after decoding to 5.1 only.