Was this issue resolved? I’m on version 1.8… but still getting songs from the same album shown under two (duplicated) albums.

E.g. songs from Bon Iver’s For Emma album was shown in two albums of the same name.

Can you share some screenshots of what you’re seeing for one particular example of this?

Hey Dylan, thanks for your speedy response. 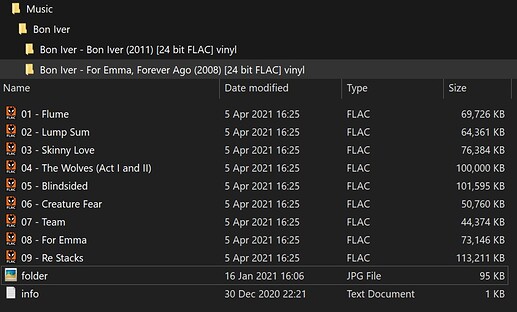 See Bon Iver duplicated albums. I have only one copy in my Synology. 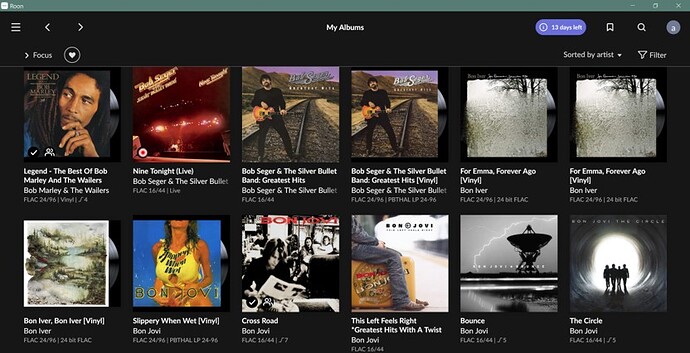 The 9 songs in the album are split into these two albums of exactly the same name. The first with songs #1 to #4. The second with songs #5 to #9: 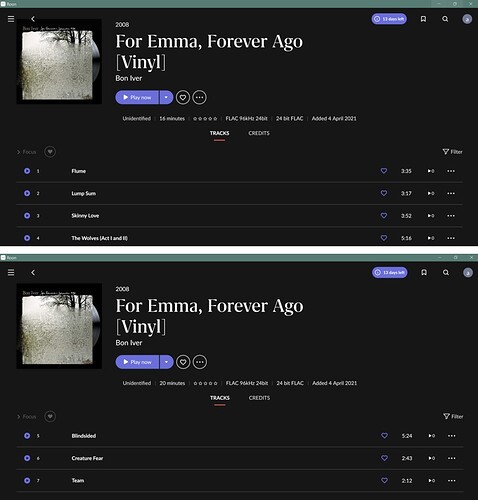 Here’s Roon’s metadata of the “first album”. The second album shows exactly the same metadata in Roon. Note that I chose “Prefer File”. 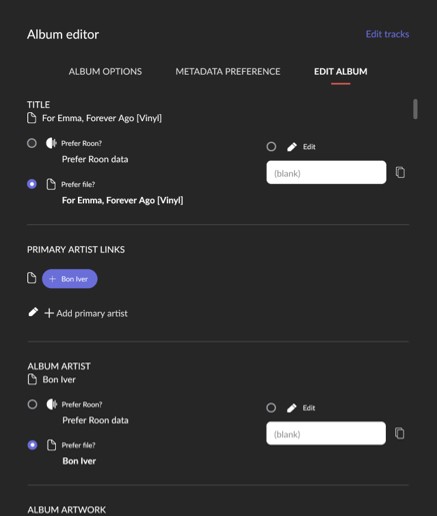 I use Mp3tag. The album art is embedded in the files. Note that all songs have the same Artist, Album Artist and Album. The Sort fields are left blank. 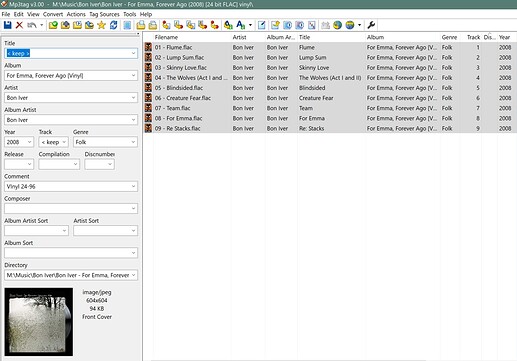 Have you tried Merge Albums to resolve this issue?

Hi Geoff, yes Merge does solve it but there are a couple of reasons I’m trying to solve the “root problem” instead.

(1) There are other problems, e.g. albums not sorted properly and compilation albums not showing album artist as Various Artists even though they’ve been tagged as such. Hence I believe there’s an underlying Metadata issue. If solved, this should resolve all these other problems. See screenshot below.

(2) This is really just an emotional reason… as I hope to pay for Roon (I’m still on a free trial now), I’m expecting it to work.
Besides, I don’t have issues when I view these albums with (i) foobar2000, (ii) Synology’s Media Server or (iii) Plex (I omitted to mention earlier that I’ve Plex media server installed and running too).
Hence, I’m thinking that this is a Roon issue (solvable, I hope!).

Below is a screenshot of My Albums Sorted by artist. Under Settings-General, Name for compilation sorting is “Use album title”. Show hidden tracks and albums = “No”.

(AAA) As shown, a bunch of albums with Various Artists inexplicably appear at the top, right after 10,000 Maniacs… and before A-Ha and Aaron Neville. Why?

Another bunch of Various Artists albums appear under “V” some before and some after Van Morrison; while some appeared after “W” when sorted alphabetically

I believe Roon is not reading the metadata correctly… or perhaps my metadata is corrupted… but Mp3tag doesn’t show any corruption. I tag and check all my albums using Mp3tag.

(BBB) You’ll also see below that the Billboard 1970 album is duplicated. The second one has just one song… but with exactly the same names for Album and Album Artist. I’ve this problem scattered all over, even though I’ve checked their metadata using Mp3tag.
Is there another field that Roon is reading from? Is there another tagging software that is more “compatible” with Roon which I should use?

Various Artists inexplicably appear at the top, right after 10,000 Maniacs… and before A-Ha and Aaron Neville. Why?

I suspect you have Settings > General > Browser sort preferences: Name for compilation sorting set to Use Album Title.

This setting allows you the option to have these compilation albums sorted as “Various Artists” or the album title. Try switching the flag.

One of the criteria for deciding if an album is a duplicate is the number of tracks on each. These albums differ.

Thanks for helping out Brian. You’re right on both counts. However…

(1) while it is under Use Album Title, how it is that 10,000 Maniac’s album “MTV Unplugged” appeared as the first album? Based on your point, it seems that the sort sequence is Album, then Artist?

See this other example further down the alphabetical list, where the result seems inverted. The four “White Noise” albums now seem sorted by Artist rather than Album (since the Albums are named numerically)?

For good measure, at bottom right, a couple of Various Artist albums also showed up… seemingly sorted by Album.
I’m trying to figure the algorithm used by Roon

(I had tried switching to Sorted as Various Artists earlier, and it helped with above… but it then had its own other set of sorting problems. I’ll keep this out to avoid confusing this thread with too many issues. Still hoping to figure out Roon’s metadata algorithm which I think may resolve all issues).

(2) You’re spot on for the Billboard album. The second album contained an additional song that I added in… but I carefully changed its Album and Album Artist metadata to match. Why won’t Roon then group them together, especially after I selected for Roon to “Prefer File”? (This worked for me in foobar2000, Plex and Synology’s Media Server)

how it is that 10,000 Maniac’s album “MTV Unplugged” appeared as the first album?

Your main sort is by artist. Thus 10,000 maniacs come first (numerical before alpha). That use album Title setting applies to various artists albums only,

That looks right to me. White Noise albums are between Westlife and Whitesnake artists and are sorted alphabetically by title within the four.

Why won’t Roon then group them together?

Why won’t Roon then group them together, especially after I selected for Roon to “Prefer File”? (This worked for me in foobar2000, Plex and Synology’s Media Server)

The systems you mention create the album by treating a folder containing tracks as an “album”. Roon uses an object model to create “album” objects, and the folder structure is not the only thing considered in this process.

Got it, and thanks to both of you Brian/Geoff. That’s helpful.

Noted the Artist vs. Album (with a different formula for Various Artist) sort. Changing Name for compilation sorting to “Various Artists” makes more sense. I’ve changed it now, but it created this other issue… the Various Artist albums seem randomly sorted? A little less messy, although still annoying

In your screenshot, you’ve got " Sorted by artist" selected. Click on it to see the other sort order options. Also, you’ll see an ↑ or ↓ arrow by the options. Click on that to toggle ascending/descending…

Geoff, I think @koay_family Is referring to the album sorting within the various artist set. “Various artists” albums are correctly appearing after “Whitesnake” and before “ZZ top” for instance, but the albums have “Age of Aquarius” before “1976 Sounds of the Seventies”. That sorting order within the main sort is what is confusing. Date added?

Ah - gotcha. Don’t think it’s Date Added… It may be that there’s no secondary sort at all - certainly there’s no way to access it via the UI.

EDIT - It appears to be Release date, with no date at all being considered earliest.

EDIT - It appears to be Release date, with no date at all being considered earliest.

Just re-checked… my files don’t have release dates. Wonder what the secondary sort is.

That link on Roon’s Object Identity was helpful. Guess that’s what makes Roon smarter than the rest.

I still can’t figure out Roon’s inconsistencies though.

(1) the Age of Aquarius is a self-compiled album, where I changed the metadata of all songs. Album = Age of Aquarius, Album Artist = Various Artists. Roon nicely showed all re-labelled songs under this self-created album. No issues.

(2) in the Billboard 1970 album, I added an additional song to the album after changing its metadata to the same name for Album and Album Artist (=Various Artists). Data Source = Prefer File for the album.

Roon recognises the Album as Billboard 1970, Album Artist as Various Artists. But somehow for this additional song, there’s an additional notation that “All tracks performed by Joni Mitchell”.
As a result, two albums appeared even though they’ve the same Album and Album Artist. 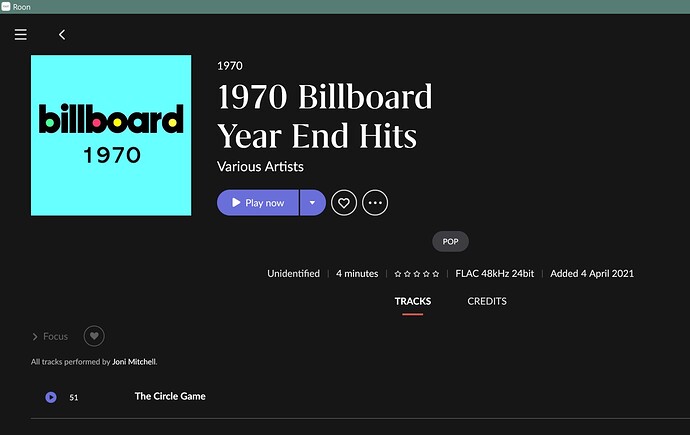 my files don’t have release dates.

Funny, it certainly looks as if your albums are sorted that way.

I do have “Year” in the metadata but not “Release date”. 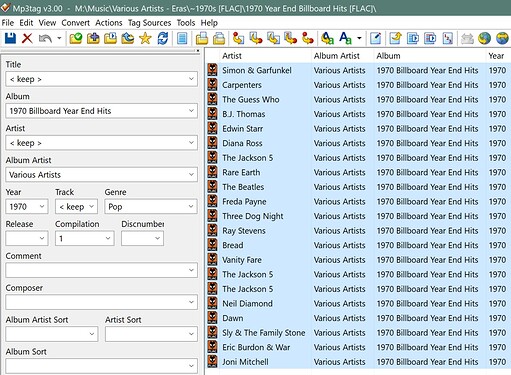 I see what you mean though. Tried to check other albums but they don’t seem sorted by “Year”. In this other Billboard 1980 album, all years were tagged “1980”. Release date = Blank.

I suspect Roon is picking up another date from the files…

In addition, while Roon grouped all files of the same album name here, it failed to recognise the metadata tag in a song by The Vapors (even though its Album Artist = Various Artists). The Vapors was also shown below…