I’ve found a couple posts about this issue, but have not been able to find one that offers a resolution.

Over time, Roon is detecting many duplicate Chromecast devices. All devices are set to reserved DHCP addresses in the Unifi controller. Restarting Roon Core seems to remove the duplicates, but they always return.
Screenshot below. Note the duplicate IP addresses. 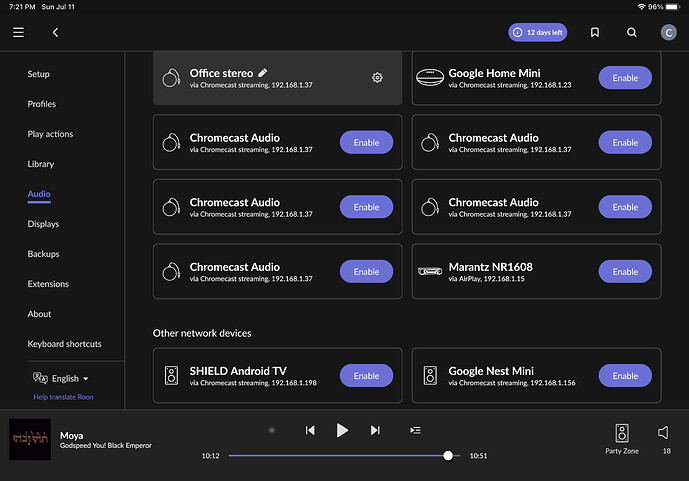 Is this the right place to get support from the Roon team? If so, pretty interesting that there is no response yet – the clock is ticking on my trial and this is a very annoying issue.

It has also started to manifest itself in the zones that appear for selection when playing music (see below). Would very much appreciate some insights from the support team here. 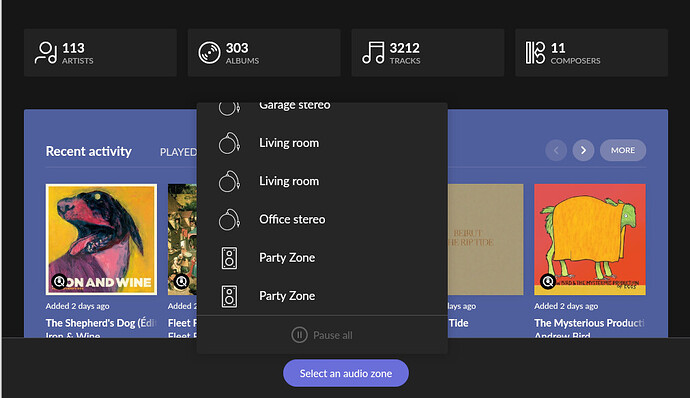 I’m not from support, but wanted to say not seen this behaviour before and I have Unifi USG and APs. Does seem an odd one. Sometirnes it’s good to actually tag @support as well posting in here.

@dylan and @beka can you help Chad please.

Thanks Simon, appreciate your insights.
I also have Homeassistant running on the same network (though not the same box). I figure the Venn diagram for Homeassistant and Roon has some overlap. Maybe Homeassistant is advertising these devices as well. No idea though!

Possibly might be worth removing them to see. It does seem like they are being advertised twice. I had this with my Uniti Atom and Airplay but nothing else some else has had on a Hegel amp with Airplay as well. It might be related to this or that was just unique to Airplay but definitely not seen one instance of this on Chromecasts or othrr endpoints. Not to say it’s not possible though. Best to try and rule a few things out though.

Well, that wasn’t it!

Darn. It was worth a try. Hopefully @support can help you when they turn up.

Semi-related question for you @CrystalGipsy : is this type of response time typical? Getting pretty discouraged at the level of @support provided here.

I don’t blame you. They normally are better than this though.

Do you have any Google Home groups with these devices in them? If so, can you provide some more info about how those groups are configured?

I disabled the Cast configuration in Homeassistant and restarted Roon Core.

I’m not familiar with Homeassistant, but to be doubly sure that it’s not interfering, can you shut it down completely?

Finally, I didn’t catch if you had already tried rebooting the whole network, I only noticed you mentioned rebooting the Roon Core. We had another customer with a similar issue who resolved it with the ol’ network reboot, so it’s worth a shot!

Hey @kevin thanks for the response.

I do have a few groups set up via the Home app – these were also appearing as duplicates.
Taking the most likely step first, I did reboot the entire network (the USG and three AP-Lites).

Early returns are promising! I was able to configure the devices and groups I wanted with no duplication observed yet. I’ll give it an hour or two and check again to ensure the good news persists.

Great news! Thanks for your patience Chad.

I spoke too soon! All of the duplicates reappeared overnight.
Repeated reboots of the network are not a sustainable option. Where do we go from here? @kevin @support

Hrm… I’m not quite sure. If they’re also appearing as duplicates in the Home app then it doesn’t seem like Roon is the root cause.

Out of curiosity, I Googled “duplicate chromecast devices” and got a myriad of results unrelated to Roon. Can you have a look and let us know if you figure out the source of the duplication?

Well… they’re not appearing as duplicates in the Home app. Not sure where you got that from. The only place the duplicates appear is in Roon – both under Settings > Audio, and eventually when I try to select a zone for playback.

Seems a simple fix would be to ignore duplicate IP addresses in the discovery of these devices.

I do have a few groups set up via the Home app – these were also appearing as duplicates.

Ah! Sorry, I misread the above as “they’re also duplicated in the Home app”.

Ah, yes. That could have been clearer! Apologies for that.
To answer your questions:

Just a little more detail: when I reset everything yesterday (Roon Core, network) there were exactly three Chromecast Audio devices appearing in Roon, which reflects the correct number of CCA devices on the network. Now, just about 24 hours later, the Settings > Audio tab shows a total of 11 CCA devices, with repetition of the IP addresses, which are reserved at 192.168.1.37 through .39.

Interesting to note here that only the devices at .37 (Office stereo) and .39 (Garage stereo) are duplicated. The one at .38 (Living room stereo) appears only once.

I know you mentioned you are unfamiliar with Homeassistant. One thing I had not considered is that there is an integration for Roon with Homeassistant. I enabled this integration early in my trial period to check it out – it mostly allows you to use endpoints defined in Roon for this like TTS notifications, and can also automate switching zones, etc.

I had this integration enabled, and it appears that Homeassistant may broadcast those endpoints in such a way that Roon is picking them up. Sort of the snake eating its own tail scenario.

I’ve disabled this integration to test my theory. Will post back here tomorrow with results.

Well that wasn’t it. When I went to bed last night, my zone menu consisted of five items that I configured myself. 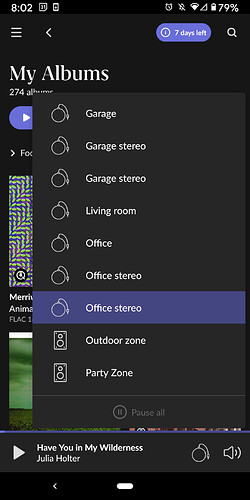 Running low on ideas here. The duplicates accumulate over time, and somehow add themselves to the zone list with no manual intervention. @kevin @support

From a Windows command line one could use dns-sd -B _googlecast._tcp to browse for announced GoogleCast services (hit control + c to stop browsing). Is there anything unusual/unexpected in the listed announcements? Do they change over time?

Note: Maybe this issue is network related (devices hopping WiFi networks {2.4 – 5.0) or access points or access points hopping channels), leading to multiple concurrent or duplicate entries over time for the same device? I also use different ChromeCast devices in my network but don’t get this duplicate entries. So it seems the technology can work as expected and the question is what goes wrong in some other users environment.