@support Can you please tell me how to eliminate the duplicate “Bedroom TV” displays. I only have one Chromecast to my “Bedroom TV”. I searched the community and the posts I found regarding duplicates are all related to album, artists or tracks, nothing on displays. Thanks.

If you reboot your Core machine and the Chromecast device do the duplicate devices still show here?

@dylan The core had been rebooted several times but I just rebooted the Chromecast and restarted the remote and that worked. Thanks for the help.

Glad that helped! If you see this behavior return definitely let us know. We will want to look into any possible patterns that you notice in what results in the duplicates to show.

If you see this behavior return definitely let us know. We will want to look into any possible patterns that you notice in what results in the duplicates to show.

@dylan It just happened again. I think all I did was add a zone to an existing group. Here’s a screenshot. 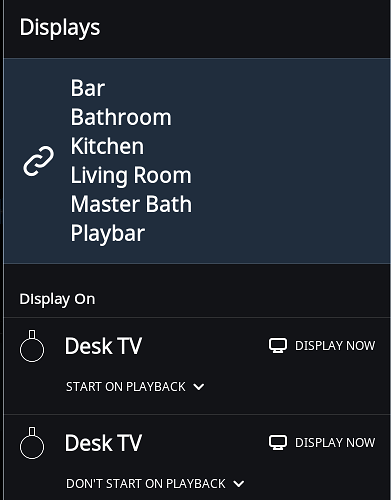 Does this occur every time that you add a zone to the group?

Do you see these duplicated in Settings > Display now too?

What type of Chromecast device are you using?

@dylan I’m using a mix of gen 2 and gen 3 chromecasts. I’m going to be adding a 3rd gen 4k one to the mix this weekend. I haven’t spotted a pattern but it’s getting worse and is even more annoying than before, view entire screenshot attached and you’ll see what I mean. I have to click “display now” on everyone because I don’t know which dup is the “real” one. It’s a major pain to reboot them because none of my TV’s are easy to access. I’m a bachelor and my home is setup in a sports bar atmosphere with open areas and TVs up high. I wish we could figure this out. 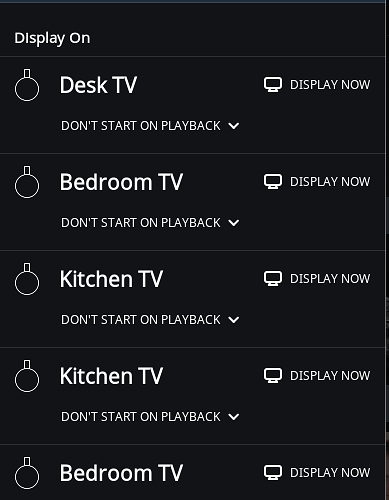 I rebooted the server and restarted the Roon remote on my PC and the dup’s went away this time without restarting the Chromecasts so that’s good!!

So does no reply mean you have no idea? Am I really the only one experiencing this? I haven’t messed with zones in a week and today I wanted to use the display feature and the duplicates are out of control.

Thanks for pinging us regarding this issue, I will be taking over your case while Dylan is on leave. I have gone ahead and enabled diagnostics mode for your account and what this action will do is next time your Core is active, a set of logs will automatically be generated and uploaded to our servers for analysis.

I kindly ask for you to reproduce this issue once more and note the exact local time in your country (ex. 1:42PM) that:

Once I have that information available, I can take a look for any errors “under the hood” around that timestamp.

Thanks. I will reboot the core, restart the remote and let you know when dups return.

@noris At approximately 1:45pm CST 12/21/18 I rebooted the core, restarted the remote and the dups are gone.

I added a zone that dropped from my group after I rebooted the core and that didn’t cause the issue. Will report when they return.

@noris When I stopped listening last night I had no duplicate displays. This morning (12/22/18 @9:18am CST) I started to play music and I had three “Kitchen TV” displays in the list. When I stopped listening last night I verified there were no dups and now this morning after doing nothing they are there. I hope your logging will provide some insight. I won’t reboot to eliminate the dups until I hear from you. Thanks.

My apologies for the delay in getting back to you here, I can confirm that we have received the diagnostics from your machine and I have started a case for you with our QA team. QA has also inquired if the Roon core and the TVs are on the same IP Range. Can you please let me know this info so that I can attach it to your case?

@noris I didn’t expect to hear back until after the holidays, don’t know about you, but holidays have me worn out

I spoke to one of our devs just now and we would like to confirm something else. Do the IP addresses of these chromecasts change at all when this issue occurs? The dev mentioned that this could be a cause of the issue, so I’d like to confirm if the IPs remain the same or if your router assigns those devices different IP addresses overnight. Please take a screenshot of your router’s DHCP page and confirm if the IPs change when you see this issue again.

@noris I suspected the IP addresses might be the issue this past weekend. I changed the three Chromecasts that duplicated the most often so the router assigns a static IP to each device. Since then, none of the three I changed to use static IP’s have duplicated. I’m going to do the same with the others and see if that resolves my issue completely. I just assumed that Roon would use the MAC address of the device vs using the IP address. I’ve never owned a router that guarantees it will assign the same IP address to a device in the future, but the MAC address is tied to the device itself.

I’ll report back after I’ve changed all of them to use static IP’s and have used it for a few days.

Thanks for letting me know that info @darqman!
If this resolves the issue I would like to let QA know this fact and ask them to take a closer look since IPs changing should not be creating duplicates in Roon.

I changed the three Chromecasts that duplicated the most often so the router assigns a static IP to each device.

Using static addresses in lieu of, or without combining with, address reservation has the potential to cause problems in the future.