Good stuff IH. You ARE correct + I see it pulls from freexxxxdB & it’s own DB (I believe? But am not in front of it as I write) + another DB maybe + the actual CD pressed data.
You’re spot on re: check/verify BEFORE I transfer over as I admitted that in albums / years prior w/ a single Lee Morgan or Herbie Hancock or Queen album title, I’d insert the CD, roughly verify facts, and hit Rip in DBPOWERAMP. I’d then look at my ROON database days or a week later.
I’m curious about ROON’s modest edit ability so will definitely read-up. Thanks.

What he (Suedkiez) said…;). Moreover, before I flew out, I actually printed the ~ 24pg DBPOWERAMP “manual” + a few supporting pages. Obviously I’m not regularly ripping/burning so I’ve forgotten the features I used to use. I’m a bug vinyl cat so I use DBs like Discogs nearly every day but only Rip a few times a year. Again, much appreciate everyone’s replies today.

Q: Why do I see such a delta in accurate listings while ripping & importing into ROON??
NOTE (this evening) was attempting to rip my "Count Basie The Complete Decca Recordings, a nice 3-CD box set w/ great booklet. Ea CD represents a year, 1937 to 1939 respectively. CD1 ripped accurately, CD3 the same but CD2 kept coming up as a Jimmy ? CD. I just finished editing the auto database for it and found/selected CD2 .
Q2: What’s the primary issue? Am i relying on dBpoweramp without monitoring properly?
Thanks.

Basically dBPoweramp calculates checksum based on the length and order of each track called a DiscId, it then uses the DiscId to lookup the Disc (not album) in online database. Now because DbPoweramp is ripping from the actual CD it can calculates this discId very accurately. However discIds are not neccessarily unique, two completely different albums by different artists do sometimes have a tracklisting where the ordered track times are exactly the same, and as the size of the database gets larger the chances of duplicate discIds increases.So sometimes DbPoweramp can match multiple discs, although I think from memory it then gives you choice of which one to match. The other problem is that maybe it only has the details of the CD that you dont have, but has matching discId, then it will just match to this incorrect disc.

dbPoweramp is wholly dependent on this discId for matching, it not comparing existing metadata (because you dont have anything to start with) or any metadata in the folder structure so there is no protection against discId matching the wrong disc. it isnt considering the disc as part of a multi-disc album, its matching discs not albums.

Compilations are less likely to be in these databases because they are less interesting, for example MusicBrainz data is added by volunteers, and volunteers are likely more interested in the original studio albums than compilations. Boxsets have the added difficulty of being large and are more difficult to add to the database. So that is likely why you are getting worse match rate for your compilations.

Roon uses a similar method, but its discId is not so accurate because it doesn’t have the original CD to work out the discId, it only has the ripped tracks, therefore I believe it uses a fuzzier logic for this. However it can also make use of existing metadata in your tracks to verify match or match in different way. I believe if you have already identified albums using a MusicBrainz based tagger that actually adds MusicBrainz Ids to the tag (not just name, artist, title ectera) then Roon will make use of these Ids. MusicBrainz Picard and SongKong both do this.

SongKong also uses a fuzzy disc id logic, we call it Albunack Disc Ids , but we also do album based metadatada matching, and use AcoustIds to acoustically fingerprint and identify individual songs. Combining these methods mean we usually match to the right album, its also means even if we cannot find the right album we can identify individual songs which is particularly useful for compilations when the compilation is not in the database.

I have used Tag&Rename for several years now. It’s very well featured, but also quite confusing and it’s easy to wreak havoc with it. Not been updated since June 2018, which is a bit worrying.

Is anyone on here able to comment on how it compares to Mp3tag?

Went to play Bowie’s “Nothing has changed” with my Sunday morning coffee and discovered the track ordering was messed up.

What started as a “quick correction before I play” turned into a slog that resulted in my coffee getting cold before I could start listening.

I fully accept - and indeed I hope - that I am just being a dunce here, but I am so confused as to why trying to reorder a track on a 3 disc album requires 20+ clicks to bully it into the right position rather than being able to either;

Please tell me I am the wrong messing this up and that this is not still the only way to manually correct sequencing errors in Roon?

Unfortunately, reordering tracks in Roon has always been a royal pain that’s never been improved.

that this is not still the only way to manually correct sequencing errors in Roon?

It is the only way which is why no one uses it.

Use an external program

I’ve used JRiver Media Center to do all the tagging in the past. And I’m using PerfectTUNES to complete the tagging if dBpoweramp fails to do so itself as I’m currently busy ripping my music CD’s into uncompressed FLAC. PerfectTUNES being an companion app to dBpoweramp.

Use an external program

Sequence errors occur with albums served by streaming services, and there is no way an external program could be of any help.

We will just have to accept that Roon in this has a ‘feature’ which is basically unusable. Roon has its rough edges and dark alleys, where only the adventurous and those blessed with Job-like patience dare to proceed.

Simply type the correct disc/track number and have it instantly jump to that position on tab/enter.

Roon does have an alternative which may work for you. On the main album screem, after you have imported (i.e. do not bother with the up and down arrow nonsence), type:

You will come to a screen similar to this: 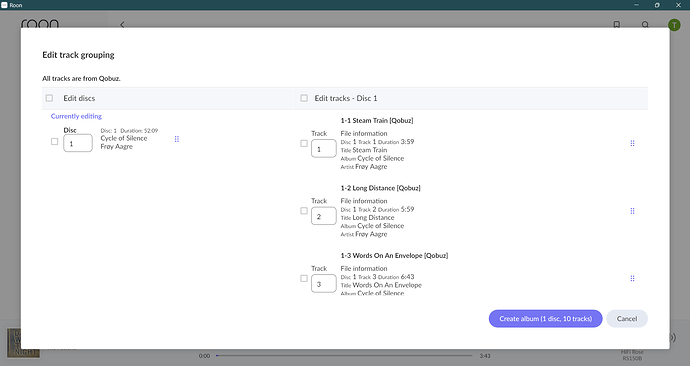 You can edit disk and track numbers from here. You can do this with both local and streamed content. However, sometimes roon will unidentify the album after you have edited disk and track numbers and if you reidentify it will then revert your disk and track number edits so you end up in an endless groundhog day loop. Sometimes not. So it is unpredicatable. It may work for you for certain albums expecially those that roon cannot identify anyway.

Why this existing programming logic was never tidied up and reused to replace the bonkers up and down arrow import process I do not know.

Generally it is easier with a 3rd part editor but of course with streamed content you don’t have that option.

If you still have a JRiver install use that before import to Roon.

My library was all tagged with JRiver, it works fine.

You are perfectly right. I use Yate to tag my files, which extracts the information from the Discogs database. Each of my files is tagged beautifully. The problem with Roon is not that it doesn’t tag properly, but that the album editing is simply out of date. In 2023, you can expect the drag & drop function as well as resizable windows. Otherwise, as you write, it takes a lot of work to create a nice and organized collection.

Only if you regard Roon as a tag editor, clearly Roon does not.

Roon honours any tags in your files , so rather than struggle with a non designed for purpose app (Roon) use an external tag editor , there are lots about

I use for example a mix of 3

For a database management system, Roon sure has not lived up to my expectations in these past five years

Ironically , I have never used Roon for editting anything , maybe the odd version here and there so its shortfalls have never been that obvious

Metadata IS a royal PITA, however. It adds a lot to the experience and it can be very easy to take into account with Illustrate’s suite of ripping and tagging software. I feel that the software is worth it’s weight in gold. I use dBpoweramp CDRipper along with PerfectTunes which includes ID Tags and Album Art retrieval