As (I) received, my Elac Discovery E3s were not Roon certified. Amazingly tech support did not know why, but Roon Community did.

I updated the firmware (twice), and all was well. Due to drop outs on our wifi, I very rarely use the speakers, but I check for firmware updates occasionally.

I found that recently there was yet another firmware update. I updated, and the speakers ceased to show in Roon configuration and could not be located via IP address.

I restored to factory settings, the units appeared again but now were not certified (once again) of course. I updated the firmware, and it happened again (disappeared).

Rinse and repeat. They now run (whining that I need to run the firmware update) and…and…one of the speakers has a bookshelf icon rather than the Z3 icon.

After reading your post I checked my z3 configurations in Settings Audio.

Something has changed in Roon, probably with the 1.8 upgrade. I no longer have the Device Configuration option that allowed setup and firmware upgrades through Roon. Can’t be a change to the Z3’s becasue the last time I updated them was through the Roon interface.

I need to find out if this was intentional. I depended on that feature to keep track of the Z3’s firmware, and that was one of the reasons I purchased a second one. Major bummer…

Does support read the posts in Audio Products or will I need to open a support ticket?

BTW, with the second Z3, I did the initial firmware update using the Elac app to make it Roon Ready. The second firmware update was initiated through the Roon device configuration. It did disappear from the Setting Audio and was not available after the firmware update completed. A simple power recycle of the device made it reappear and be available to Roon with no further issues after that.

Thank you. What firmware number do you have on both at this time, and did your icon change for either or both?

Cannot blame Roon. Elac has not done well with these units.

I hate this app and that is why I liked the ability to do device config with roon. Both are on Ethernet and both are working. The one device that will open with the app is showing firmware at 1.0.52.

They were both up to date at the same level in December.

Ok, this is strange. As stated above I checked the Audio config for the Z3’s after reading your post. When I checked earlier on the PC remote the Device Info link was missing.

Just went back in Settings Audio to get a screen shot of the config without the Device Info link and it is there now.

Had not been drinking earlier, 2 triples down now, maybe that’s why.

Anyway here is a screen shot of the Configuration panel accessed from Settings Audio showing that a firmware update is available and can be initiated from here. Current version is 1.0.52 and 1.0.54 is available. 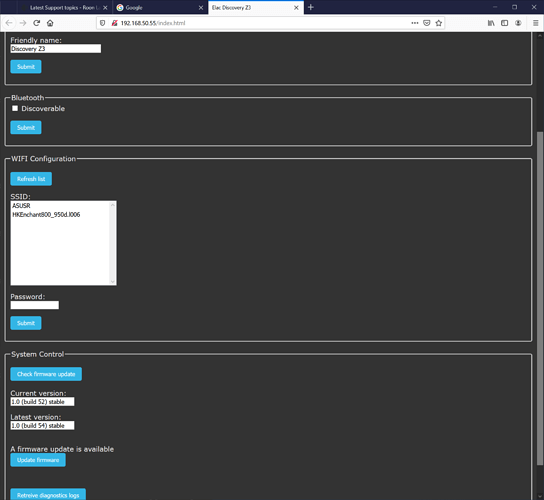 This is how I’ve done the Z3 firmware updates. Through Roon instead of the crummy app on my phone.

At this point the Icons still look like the Z3. 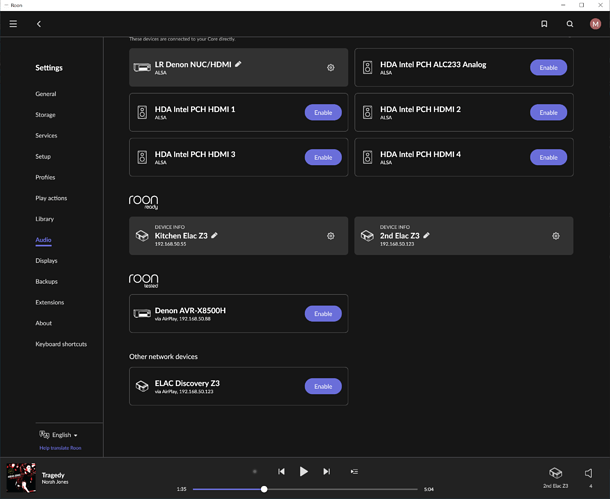 Does support read the posts in Audio Products or will I need to open a support ticket?

Support do not guarantee to read posts in other categories than the Support category of the forum, therefore I would suggest you are best opening a Support ticket there, and they can take a look at this issue. Given that the Z3 is listed as Roon Tested, I think they should.

I have both Z3s at 1.0 (54). Both now have the same icon. I got there by doing a factory reset and doing updates, one by one. I do not plan to update further since they work. But the software design is very disappointing.

I access the units by their IP. Their app sometimes shows both speakers but often shows neither.

I was concerned yesterday when I could not locate the Device Info link for the Z3’s in Settings Audio Roon Ready section. Whatever the issue, the links are there now and if anything the interface seems more robust.

Updated the firmware on both using the Roon interface. Went smoothly both times. A web page was displayed and followed the progress. When the process was complete I had webpage control of the device and added a bookmark for each one. Perhaps this was added by the firmware update. At this point it appears the app is no longer required.

The process seemed flawless with the Ethernet connected devices. Maybe that is the difference with the efforts involved. The Z3’s appear in the Settings Audio as Roon Ready and Other - Airplay. I have them enabled in the RR section. 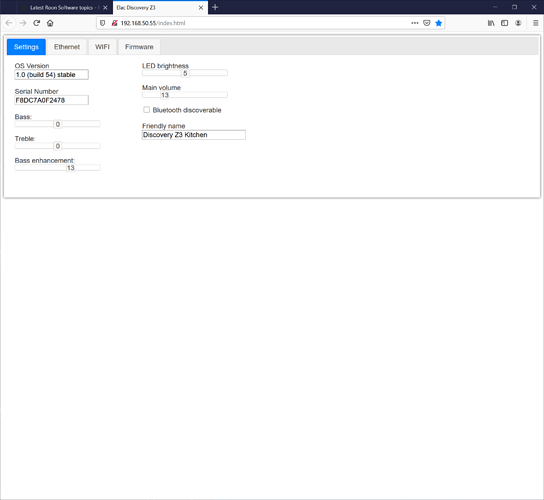 My Z3s must use WiFi and I have stopped at 1.0 (54). The correct icon appeared but there was some confusion within the configuration that indicated that both Z3s shared the same IP. That appears to have suddenly and inexplicably resolved. as you can see, it also lists the Z3 as other devices both both sharing the same IP.

Here are the data: 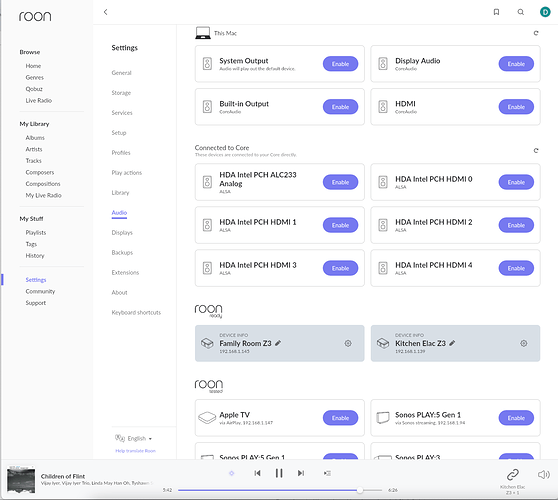 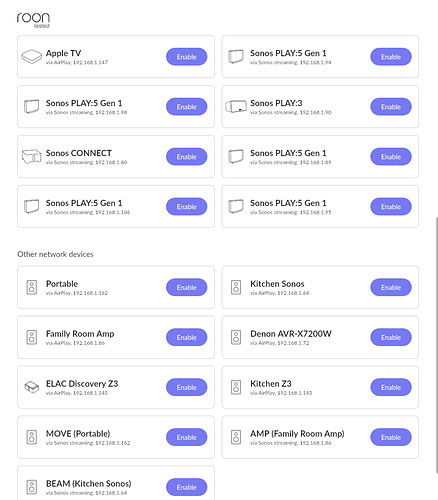 Just an addendum. With both speakers recognized and working, I decided to attempt to update the firmware again. After the update, neither speaker appears, and I do not have an IP address for either. Shall see what happens, and if not functional, shall factory reset and not update to latest firmware.

Did you use the device info link in Roon or the Elac app?

The link is much better but it may be different with wireless. Not sure about that.

What about a temporary ethernet connection for firmware updates then back to wireless for playback?

I cannot go beyond .47 or I lose the devices in Roon. I was not using the Device Info.

I’m sorry to hear that, can’t imagine why WiFi would be so much more difficult.

When you run the app from within Device Info, do you initially receive a system error message in the middle of the screen? I have gotten that since shortly after buying the first speaker.

When I click on Device Info a small info screen pops up with the Serial number, Version
RAAT SDK version and a link to Configure device. 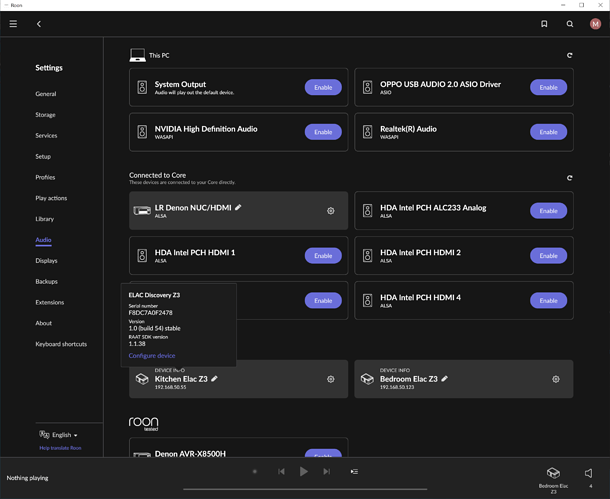 This is using my PC/Laptop remote. What remote are you using?

It is not a critical event (unlike when I turned wine into water), but on an iPad or a Mac…when I would click on Configure Device, as message of Device Error would appear. It would disappear as I went on with the configuration. But as with anything, when I just tried to screen capture that message, it appeared on no devices. I had just wondered if you had seen it. Thank you for responding. It may not have happened in the real world, perhaps just those times leaves are talking to me (and they have an accent).

Do you have preferred Z3 settings under Configuration

Sorry, not sure I understand the questions. Are you referring to the Roon config for the Z3?