Hi @Michael_Putz, you can restore a backup by going to Settings > Backups and there choose Find Backups. From there select the location of the backups and you’ll be able to restore.

@dylan - no this doesn’t work.

The only option there is a Dropbox place, where I do not saved my backups. I do need access to the backups from the OLD RoonServer and transfer the most recent one to the NEW RoonServer. No idea how to, however… PLEASE HELP!

PS: Sceduled regular backups should have been saved on Internal Storage file.

You should be able to access the RoonBackups folder by going to \\NUCLEUS\Data\Storage using File Explorer if that’s where you were storing them previously. I’d recommend copying it from there and moving it to a USB drive and then restore the backup from that. 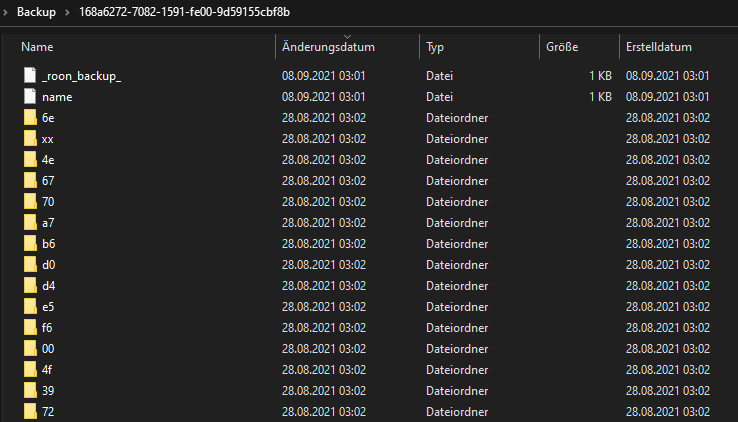 Hi @dylan - the structure and name of the files are like this (see screenshot) - what part (file or folder) of it is the actual backup for restoring? Sorry for asking so many stupid questions.

Also: Nucleus library doesn’t show the USB Stick & a backup on this was merely impossible in the past weeks and months, so the supplier of the Nucleus machine and I decided to store the backups in internal storage.

Why are USB Sticks not shown in NUCLEUS library (the same USB works perfectly fine on my PC computer…).

so the supplier of the Nucleus machine and I decided to store the backups in internal storage.

Was this a Roon Dealer? If so, then in my opinion they need some education about installing/supporting Roon and Nucleus.

And your screenshot is showing the internal structure of a Backup. You’ve gone one level down too far in the folder hierarchy. I think you need to tell Roon to select the folder named “Backup” - this will then show you the Backups that have been taken on the Nucleus.

Re the USB Stick - I have found that some makes of USB sticks don’t seem to be recognised by my ROCK/NUC (which is using the same Roon OS as your Nucleus). You could try another USB stick. But personally, I wouldn’t use a USB stick, but a USB HDD or SSD. The reason is that a Roon backup consists of thousands of folders and files - and, anecdotally, writing these to the typical hardware used in a USB stick seems to affect the life of the stick adversely.

I’ve been using an M.2 120GB Samsung SSD in a USB housing for the past 5 years without issue.

what part (file or folder) of it is the actual backup for restoring?

You are looking actually AT the backup. The backup copies the thousands of small individual files that make up the database. So, from your screen shot, you would actually go back up a folder level and the backup folder would be 168a6272-xxxxxxxx (too tired to type the whole thing out).

The red arrow is point TO the backup folder. The contents of that folder is the backed up database files. It is not a backup like is done by backup software (ex. Acronis) that creates 1 big backup file containing all the backed up data.

Extra: Just noticed Geoff’s response which I did not before replying. So, sorry for duplicating information. But, yes, you should be pointing the Roon restore process to the top folder, in your case the folder called Backup in your screen shot. It should read the folder contents, find the directory called 168axxxxx and display it as an option to restore with more human relatable title like the backup date.

But, yes, you should be pointing the Roon restore process to the top folder, in your case the folder called Backup in your screen shot

Thank you @Rugby & @Geoff_Coupe for your helpful replies!
@Geoff_Coupe - “Roon Dealer” means my HiFi hardware dealer (i.e. the guy who sold the Roon Nucleus to me here in Munich, Germany, a few months ago).

@dylan For some reason, Roon only shows backups from a g e s ago.
This is the case although the most recent date on my backup files are from Sep 2021. Are the backups lost? Which would mean loosing half a year of tagging…

Also @support @dylan - after starting to use the new RoonServer and stated again to tag stuff, right away the machine became veeeeeery slow, once again!!
Can it be the case that the Nucleus cannot handle tags on 40 k tracks?

Looking at the Dealer locator for Roon, then there appear to be 6 HiFi stores selling Nucleus products in Munich, and 3 of them are categorised as Roon Dealers. I would hope that a Roon Dealer would have some knowledge and expertise about what they were selling, and not just be a box-shifter…

Can it be the case that the Nucleus cannot handle tags on 40 k tracks?

Is every track tagged, or, are the Tags at the album level? And multiple tags per track or album?

Is every track tagged, or, are the Tags at the album level? And multiple tags per track or album?

@Rugby - given that, unfortunately, all my former tags are gone because of the missing backups, I’ve started from scratch & tagged every track as “nonevaluated”. After listening through my library over time, the plan is to substitute each “nonevaluated”-tag with situational tags (can be anything, mostly for evaluation a song with stars on track-level).
So, to cut a long story short: right now each and every track (on track-level) in my library does have one (and the same) tag.

Hi @Michael_Putz, is there any chance you backed up to another location at any point? If not, it’s unlikely that the backups would be able to be recovered. Can you share some screenshots of what you’re seeing when you select this backup location currently?

after starting to use the new RoonServer and stated again to tag stuff, right away the machine became veeeeeery slow, once again!!

How are you adding this tag? Are you selecting albums and tracks and adding them all at once? How many tracks total?

A post was split to a new topic: Endlessly adding music to library

How are you adding this tag? Are you selecting albums and tracks and adding them all at once? How many tracks total?

Hi @dylan — I‘ve selected all tracks in my library (40,644 in total) and tagged them as „nonvaluated“.
For me this is helpful as a sign that I haven‘t evaluated these tracks regarding „Stars“ (we unfortunately do not have star evaluation for tracks in Roon, but for album only), genre (a genre of a track might significantly differ from the genre of the complete album) or year of recording (especially for compilations, on those we do have different years per track, differ from release year of album)…

Can you share some screenshots of what you’re seeing when you select this backup location currently?

Hi @dylan - I do see these date information on the backup on the hard drive (date of creation 8th of Sep 2021):

However, if I choose the 168a6272… file in Settings/Backup in Roon, I do recieve this feedback: 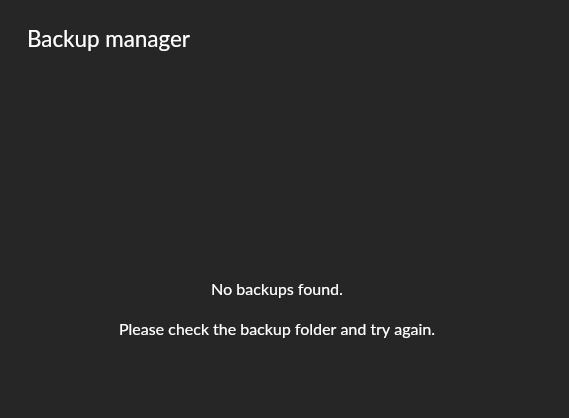 And if I choose Backup, I do see the most recent being from March 2021: 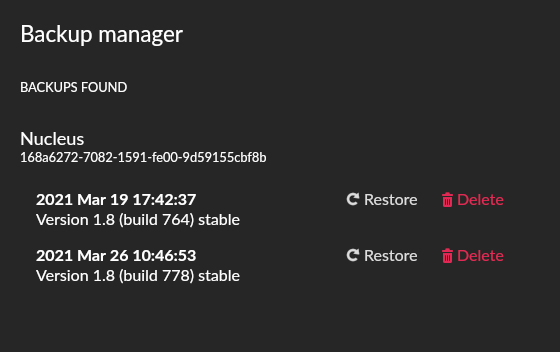 I cannot find any other place, where I might have saved the backups. The machine however told me that the regular backups WERE saved actually. Bi-weekly. Now - gone? Where?

Hi @Michael_Putz, can you zip up the entire Backups folder and upload it here. Thanks!

How were you creating the Zip file? Using the built-in function of Windows?

I think you just have to be patient. You have a large library.

I have around 60,000 tracks in my library, and creating the Zip of the Backups folder using Windows took just over 1 hour to complete, and was around 14GB in size. On my system, the backups are held on a USB drive attached to my ROCK/NUC, so, just like on a Nucleus, there will be extensive network traffic involved in creating the Zip, and this will have an impact on the time taken to create the file.

can you zip up the entire Backups folder

Hi @dylan - after having massive problems with a windows zip program (I’ve stopped the zipping process there because it took more than 14 hrs for less than the half of the folder size). Instead I’ve uploaded compressed file in RAR. Hope this works.

Also, please drop me a not about the issue "very very slow Roon re: tagging / 40k plus tracks that are taged. Thank you!

@Geoff_Coupe, Thank you! It took more than 14 hours for less than the half of the backup size… I have decided to switch to RAR comression instead …

Thanks, @Michael_Putz. We’ll take a look at the backups you uploaded.

I tried reproducing this with a smaller subset of tracks (I have about 12K) and I couldn’t reproduce this. Are you seeing slowness with everything or specifically with tagging? I’m going to have our QA team try this with a larger library but tagging tracks (regardless of how many) shouldn’t cause any slowness. And you’re not reaching the limit of what the Nucleus is capable of in terms of # of tracks.

After a reboot of the Nucleus does it speed up at all?