Endless parade of crashes on iOS

I think this issue has been reported as naseum but the parade of Roon remote crashes is endless.

Remove/reinstall/reboot - nothing reliably resolves the issue for longer than a few days. Rebooting server? Nope no dice. Rebuilding server - nada. Wipe and rebuild iPhone. Negative. No combination of any typical prescriptions end the torture.

It’s beyond frustrating and honestly is such a regular occurrence across so many different versions it’s tough to comprehend.

I have also tried:
Not opting for my preferred dark mode
Leaving everything default after install
Not moving the Roon remote icon from where it lands after initial install (odd I know but thought I might be on to something till I wasn’t)

Sorry - I am multi year but new to submitting anything support related (so please don’t bash me if this is the 50th such post). Happy to provide log data if helpful (but find no easy manner to upload)

I really love the app but this constant instability is maddening and seriously detracts from its otherwise brilliance.

Hey @roy_langford, iOS stability was significantly improved in Build 918. Take the update and let us know if you’re still seeing crashes (and if so, where/when they happened). Thanks!

It doesn’t look like your iOS device is communicating with our diagnostics servers properly, can you please toggle Save logs to Files on next startup from your iOS Settings, reproduce the crash and submit a manual log set for review? 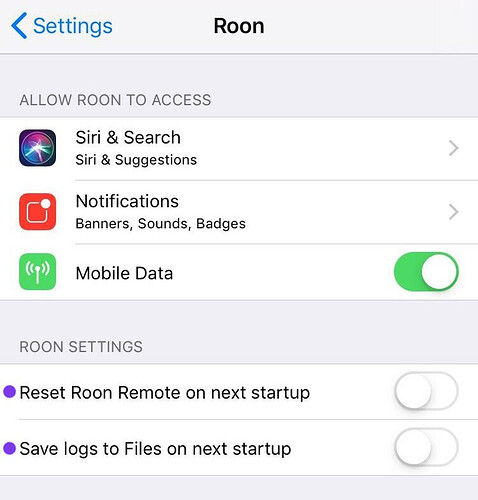 Please let us know after log files have been uploaded, thanks!

I am almost reluctant to report any alleviation of these crashes since they nearly always come back (and when they do they’re vengeful).

However with the latest update to 918 I have not had any crashes. Unfortunately I can’t locate my prior logging - if it mattered —this many days later.

I suppose the frustrating thing for Roon users continues to be any immediate fix ends up not truly being stable across their user base. I have had the same problem since the outset - for years. That such a fundamental problem should continue to persist as among the most consistently reported issues in your forums is concerning. It’s akin to a piece of hardware switching off on its own all of the time —and certainly no one would tolerate that occurring.

…and yet despite this dogged problem I have continued to pour money into the product because on a good day -when it’s all working - there is nothing that comes close to competing with it.

Even Volumio with its fiddly open source nature is more stable for longer periods than Roon.

Thanks for listening,
R

Despite my statement just a day ago - as if like clockwork - 923 has reintroduced my instability and stage. The crashes are back - and so bad there’s barely an opportunity to click on anything.

I uploaded two separate logs from today (for all the good it will do).

What a poor experience.

They are uploaded. 923 is a disaster.

I used to have my share of iOS crashes but now it seems fine. Can you detail your network structure please? All my problems were network related and never thought a single minute that was. Stay tuned!

Have to agree with @roy_langford on this one. It crashes within 30 seconds of using the app while browsing through any arbitrary screen.

What specific network info do you need?

I used to run a NUC (rock) but anecdotally it seemed to run less stable so I switched to Mac mini. The instability is so dogged it drives one ultimately to just try anything. I kicked the Nuc down to secondary Volumio node duty and shocker - it really never has issues.

My network is really pretty basic and while I like the Amplifi solution it’s UI is not especially powerful. In other words, there is a not a ton of user control on offer sufficient to implement any especially more sophisticated setup.

Same issues here. Latest core, latest iOS app, latest version of iOS on a 12 Pro. The Roon iOS app crashes in less than 5 seconds every time I try to use it.

Please set different SSID (name) for 2.4GHz and 5GHz. Reboot the iOS device and try each band individually. See if one works better than the other.

If neither band works good enough, turn off the additional mesh temporarily and retry both bands.

I have moved to a dedicated M1 Mac Mini connected directly to router and have been without crashes for several days. Sadly right when I was started to grow accustomed to Roon not crashing inside of 30 seconds - the crashing has returned.

Nothing - no combination of miracles ever truly resolves this hideous instability. I will upload logs again for all the good it will do.

At this point the instability is comically bad. It feels as if Roon just want to punish and drive away iPhone users.

The guy from lumin adds in his final suggestion “use android device.” This entirely defeats the point and I countless users are making.

I’m not saying Android is better and I’m not telling people to use it.

My philosophy in problem diagnosis is to try everything, thereby gradually narrowing down the culprit.

If both iOS and Android apps crash in the same way, it may be your network or Core. In this case, the next step is to use a wired client (with some hassle even iPad can be wired), if on a wired network it does not crash you’ll know it’s the WiFi. Alternatively, move the Core to Windows.

Anyway, if my offering of suggestions is not appreciated I’ll amicably leave this thread.

I appreciate the feedback but the key feedback I want - we all want - is feedback from Roon. This is a remarkably tedious way to obtain support.

Getting something like this to just simply run in a stable manner on about as common a mobile device as exists on planet earth should be the entry level - base requirement for such solutions.

I uploaded logs but for what? Is anyone analyzing them and offering feedback against what they found? Nope. All I continue to get is anecdotal try this and try that. It’s fumbling and non specific and painfully ineffective.

Thanks for letting us know of those updates. We have looked over logs, yes, but we have been unable to locate any crashes contained in the logs.

Also, it looks like your iOS devices are not communicating with our diagnostic servers which is strange. While running the Mac Mini as a Core, have you noticed any crashes on the Mac Mini Roon app itself or only on iOS?

I just uploaded another log file. The app crashes on my iPhone now in about 5 seconds. I have futilely reinstalled, rebooted several times.

It’s only iOS devices. I have not really had any
core crashes.

Its always been iOS issues that have plagued me for the years I have hung in there with Roon. Note this problem occurs on multiple iPhones.

I have not had much interest in iPad because the last time I checked I could not do basic page orientation - a feature available to even the most basic apps.

Let me know if the latest log i sent reveals anything interesting.

Any luck with my most recent log data? The latest version of Roon might actually have the worst instability I have experienced on iOS

I feel at this point like I am talking into a void. Oddly given the fits and starts responses from Roon via this “community” support model - I almost wish for a more traditional support scheme. I never thought I would lust after old school creating a support ticket and having someone work it to completion.