When I reboot my Core, two endpoints do not show up until I powercycle them. This is a new issue, which I have never had before. I have the following ports open in my firewall: 9100:9200/tcp, `9003/udp. 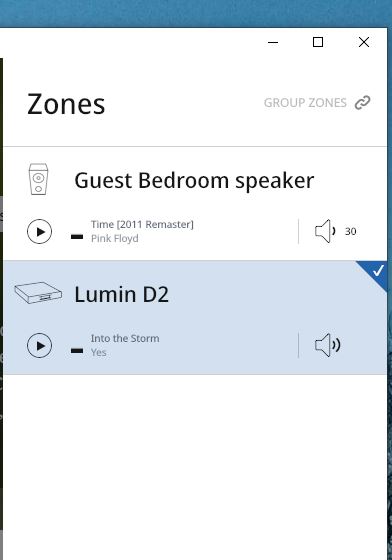 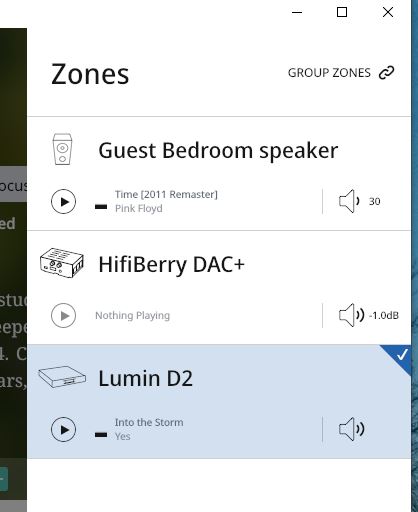 When I reboot my Core, two endpoints do not show up until I powercycle them

According to your screenshot, I only see the Hifiberry zone appear after the power cycle, what is the other zone impacted by this issue?

The core is connected via ethernet to the Orbi switch. Both the Lumin (wired, same switch) and Hifiberry (wifi) do not “survive” a reboot unless they are power-cycled. I took the 1st screen shot after power-cycling the Lumin. Oddly, the Guest Bedroom Speaker (Google Nest Mini) does survive the reboot.

Instead of performing reboots of the zones, does unplugging/re-plugging the Ethernet cable for the Lumin get it back as well? Or does it require the full reboot?

In the Netgear Orbi, please make sure IGMP Proxy is enabled (uncheck Disable).

Also try shutting down all network devices. Power cycle the Netgear, wait for 5 minutes, then power up everything else.

Unplugging and plugging back in the ethernet did the trick for the Lumin.
Hifiberry still requires a reboot because of Wifi.

I should note that these are all new issues after doing a clean install of Ubuntu 20.04LTS and the latest version of Roon Core (noted above). All other hardware on my network including the Orbi and connected to Roon Core have not changed.

IGMP did not make a difference, and shutting down all network devices seems excessive.

As for the firewall, ports should all be known and documented. Also, by what amounts to be a simple off/on of network connection, I can’t see this being a firewall issue.

The Lumin has been a rock solid device over the past year.

Can you please reproduce this issue once more, note the exact local time + date you booted up the Core and didn’t see these zones, and then note the time + date you unplugged/re-plugged the Ethernet cable for your Lumin and post a copy of your Roon logs by using these instructions?

I have followed up via private message.

We’re unsure what could be causing this issue to occur—we are in agreement that its odd it would occur after the setup was stable for a long period of time. Did this behavior occur in the same timeframe that you upgraded to Ubuntu 20.04?

Looking at the diagnostic logs, we’re unable to detect any issues on Roon’s end of things. We can infer that RoonServer is correctly sending the discovery packets to the operating system’s network stack when it discovers and connects to the “localhost” RAATServer instance seconds after startup. We then see the connection to the HiFiBerry device as well.

I’ve scheduled a ticket with the QA team to see if anything has changed with Ubuntu 20.04 that would cause this to occur. Offhand I’m not aware of anything that should have impact here, but we’ll try to replicate your setup to investigate further.

Hi John, thank you for your reply.
This issue did first appear with Ubuntu 20.04 after being very stable for a year (when I first acquired the Lumin). I will disable the firewall next time I reboot, and reply.
However, there should be a definitive list of ports that need to be opened which I could check against.

Even if you refuse to power cycle the whole network, at the absolute minimum you must power cycle the Netgear, Roon Core, and Lumin, after disabling whatever firewall in Ubuntu and Netgear (at least temporarily).

Please see the following threads regarding Ubuntu firewall, this might help:

Roon Bridge on Linux Trying to get Roon Bridge to work with the built-in firewall on Ubuntu (ufw). Found a posting from 2015 saying that I need to forward UDP port 9003 and TCP/IP ports 9100-9200, but I’m struggling with the syntax, and this topic doesn’t seem to have made it into the Room documentation. Would like to “allow” roonbridge as a service but it does not seem to have an entry in /etc/services although it is a running service. ufw default settings currently block Roon Bridge.

Noris,
What would help the most is if Roon published a list of ports used by their software. This is an exact science after all…

As I restart the server, I see one consistent with my Lumin, but the other isn’t.
c

What would help the most is if Roon published a list of ports used by their software. This is an exact science after all…

We don’t publish a list of ports because Roon uses a few randomized ports, so they are subject to change each time the application starts and more ports may get used as Roon matures.

Instead, we suggest to add an “application” level firewall exception for Roon whenever possible:

OpenSnitch, an application firewall for Linux, is no longer under active development. This didn't mean it was the end for this project though, because Gustavo forked it about 8 months ago, and has been constantly improving it since.

I never got this to work and Roon don’t seem to know how to fix it. I gave up and just repurposed an old NUC to run Roon Bridge in headless mode. That way I can run a firewall or a VPN on my main PC without worrying about Roon. Some way to go before we get a decent Linux solution I think. (I’m running Xubuntu.)

So the answer for Ubuntu’s UFW is:
ufw allow from <endpoint ip>
I can confirm that with this rule, the Lumin appears after restarting the Core.

OpenSnitch is experimental. Why don’t you publish an application profile for UFW. I perhaps understand randomized ports, but they could be set within a range.